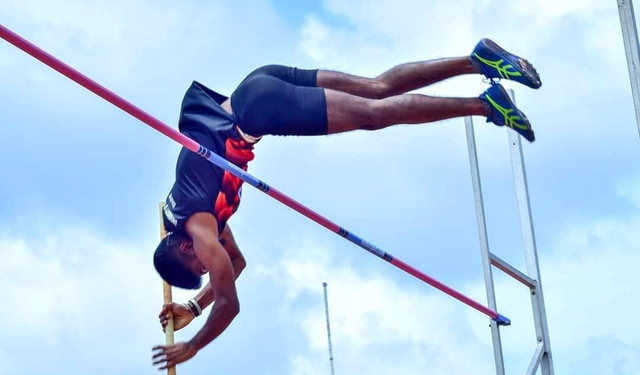 The crossbar was pushed by another 10cm, and a vaulter’s sprint down the runway wasn’t fast enough.

Another 10cm and a vaulter’s planting of the giant pole’s butt-end wasn’t technically good enough.

Another 10cm and a vaulter’s propulsion into the air wasn’t high enough.

And so, it continued until it was brought down to the 2 most competent pole vaulters among the ones taking part in the All Island School Games 2011.

The crossbar was pushed up by another 10cm, vertically expanding the horizon defined by their previous launches. As if reaching this ultimate contest wasn’t tense enough, both had flunked 2 out of the 3 given chances to clear the height of the crossbar. It is only natural that 2 failed attempts would eventually lead to some flaw in the final try. Anxiety sure was high, as the 2 vaulters prepared to confront this virtual do-or-die situation.

On the call for the final trial, Balasubramaniyam Lavanan, with his eyes set on the crossbar looming over his head, ran down the track, planted the pole, and then catapulted himself into the air as the flexible pole unbent, to fly right above the formidable crossbar. As he fell back to the earth, cheers pierced his ears and he knew that he had cleared this height, that the other couldn’t surpass. As the mattress below cushioned his fall, he was aware that he had secured his first gold medal.

How could someone not fall in love with this daunting sport, he asked as he reminisced about his pole-vaulting journey.

How did you embark on pole vault?

The most popular sport in my school, Arunodaya College in Alaveddy, Jaffna, was pole vault. There were many boys and girls who tried out pole vault under all age groups. Further, my school coach, T. Pakeeshwaran, had won colours for pole vault at the national level. Listening to his riveting experience in this sport, in addition to the existent popularity for this, was all it took to ignite the spark in me to try pole vault for the first time in 2010.

Be it gold or silver or bronze, there wasn’t a single All Island School Game or Junior or Senior National Championship from 2011 to 2014 in which you hadn’t secured a medal for pole vault. How did you pull off this remarkable feat?

It was mainly practice. As I said, since pole vault was a well-liked sport in school, we would practice very hard regularly. During Junior National Championship meets, I did use to feel very nervous, since I was still trying to get the hang of it. However, with constant practice and participation in several tournaments, by the time I reached Senior National Championship meets, I had honestly become quite fearless. Conquering this fear, I believe, was my key to achieve great heights, literally, during these contests.

Also, this is one of the more technically demanding events for all sports. Sometimes no matter how much you practice, you won’t be able to clear heights, unless you have mastered the technique that complements your speed, flexibility, and vigour. Thus, identifying a suitable technique is of utmost importance. For this, I used to spend ages comparing vaulting videos of mine with those of other legendary national and international players, to identify my technical shortcomings and work on an apt technique. My coach at school even made sure that these videos were available in the school computer lab. So, in my free time, I’m either physically engaged in the sport or mentally engrossed in it via videos.

Have you ever represented our country in a pole vault tournament?

Yes, I managed to earn a chance to vault for our country during the 15th Asian Junior Athletics Championship in 2012. It was held in Sugathadasa Stadium. We did give a tough fight. Since we were up against players from other countries who had vaulted for even Olympics, we couldn’t, unfortunately, secure a place.

Our champion here is a gold medalist in Inter-University Championship from 2016 to 2019 and a continuous record-breaker. Literally, centimeters separate him from both his previous best record and a life-threatening catastrophe in this patently dangerous sport. What kept you at it during your university life as well?

Simply my love for pole vault.

Actually, I wanted to pursue Sports Science or Sports Management for my undergraduate degree initially. But as I got an opportunity to enter the Arts Faculty of the University of Peradeniya, I was persuaded to go for this instead. Upon my entrance to the university, I discovered that it didn’t offer pole vault. Even so, I was determined to continue pole vault. At this point, I wish to express my gratitude to the University of Peradeniya and the athletics coach, Mr. Samarakoon, for having bought all the equipment necessary for pole vault for me to indulge in it. It is noteworthy that my university had offered me such a privilege, despite me being the only one who took part in pole vault during my entire stay at the university.

Anyhow, practice here wasn’t as intense as the one I had gone through in school. Therefore, about 2 days prior to my Inter-University Championship meets, I would go to my school in Jaffna to engage in training. Also, the pole, that I use for all my tournaments, was kept in school. On the day before my tournament, I would load it in the bus to transport it to the location of the meet. During my semester break even, I would rush to my school to simply run down the track with my pole and fling myself into the air.

Pole vault holds a place within the top 8 riskiest events at Olympics. A staggering number of things can go wrong in this inherently dangerous sport. Have you encountered any such hazardous incidents during pole-vaulting?

Yes, once during practice after hurling myself over the crossbar, I landed off the mattress. My back hit the bare ground. It sure was a close call, since mercifully I wasn’t injured physically. Rather, I was immensely shocked by the unexpected turn of events. In fact, soon after the fall, I was once again on my feet alright. Yet, it wasn’t the end of it. In many of the tournaments to follow, I was continually nagged by fear and nervousness. For a vaulter, psychological wounds heal slower than physical wounds.

It is evident that a fair share of your challenges has stemmed from the risky nature immanent in the sport. What else would you term as the challenges you have had to face in this dynamic journey?

Balancing studies with sports had always been challenging. In both school and university, I had missed lessons and lectures due to practices and tournaments. Be that as it may, I was resolute on covering all that I had missed. I still remember how my coach at school would ask me to show the completed notes of the work I had missed on the days I had spent in the grounds and not the class. In this manner, my family, friends, and mentors unflaggingly assisted me to strike a balance.

Pole vault is psychologically as demanding as it is physically. There would be days where our performance isn’t up to par, due to unfathomable reasons. Snapping out of such phases had always been quite taxing. Despite being fatigued, we should continuously dream and visualize clean glide over the crossbar that would honour us a game with no regrets. An unwavering devotion to this sport is essential to overcome these obstacles.

What would you like to say to university students who intend to try pole vault?

Aim high fearlessly and give it your all. The adrenaline rush as you push off the ground to swing over the bar is worth fighting for. It all depends on your mindset to dream great heights and commitment to practice. Even as a newbie, you could excel at pole vault if you set your heart on it.

Now that you had graduated, do you still continue pole vault?

If any provincial meets come up, I go to school to help them train for the meet. I also seize these opportunities to pole vault myself. It is unfortunate, really, that I have to quench my thirst for this sport using these meager chances, now that I am done with school and university. Lack of career opportunities relevant to pole vault in Sri Lanka puts us at this disadvantage.

As we wind up our interview, wishing success in all the future endeavors of the nation’s vaulting star, we also sincerely hope that his inspiring words would steer aspiring vaulters to launch their own phenomenal vaulting journey.