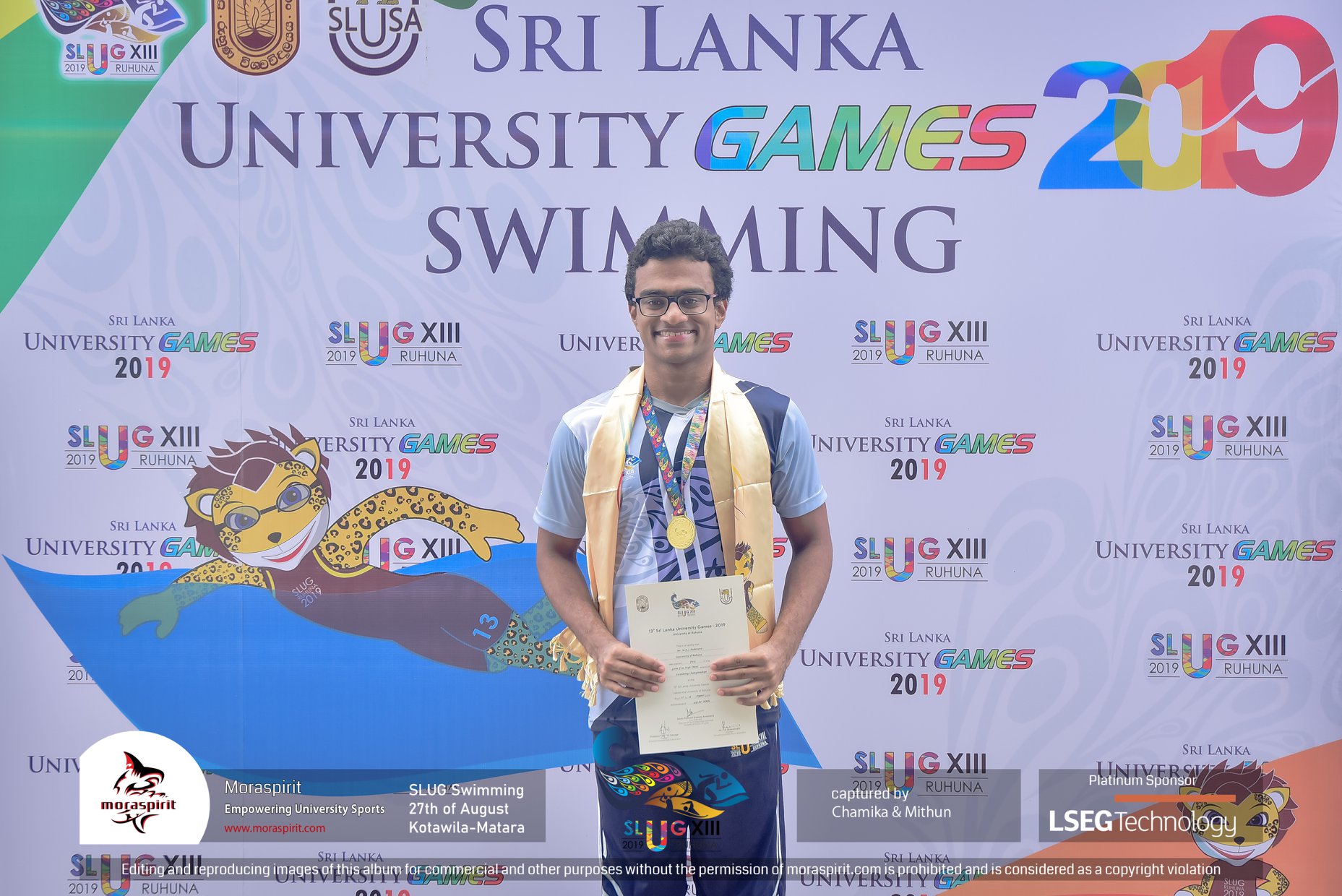 Mevan Induruwa at age 20 won the 'Galle Face 5 Km National Sea Swim Marathon' in 2018 becoming the National Champion of the '5 Km Open Water Swim Marathon'. The following year (2019) he defended his title on the 5th of January timing almost 10 minutes less than his timing in the previous year. Just 6 days after that, the 11th of January 2019, was Mevan's first day at the Faculty of Medicine, University of Ruhuna. In the university, he impressed all his mates and seniors by winning all the swimming events he took part in his very first Inter-Batch Swimming meet of the Faculty as a fresher.

Three weeks later he took part in the World University Games swimming trials and booked himself a place in the Sri Lankan contingent for the '30th Summer Universiade' in Napoli, Italy. Later in September, he won 5 Gold Medals in the '13th Sri Lanka University Games (SLUG)' hosted by the University of Ruhuna with all 5 being SLUG Records - 3 individual events and 2 relays. In 2020 he got recruited by MoraSpirit, for his writing, as a Sports Writer (Correspondent from Ruhuna). During this same period, he also got selected to represent Sri Lanka at the 'FISU (International University Sports Federation) Volunteer Leaders Academy (FVLA) 2020' as a NUSF (National Universities Sports Federation) Student Representative.

Now, in 2021, he's all set to become Sri Lanka's FISU Student Ambassador for the year 2021/22 after the FVLA 2021 which will happen from the 8th to 10th of this month (September, 2021). He'll also be taking part in it representing Sri Lanka. A champion swimmer, an enthusiastic sports journalist and a passionate sports volunteer - this is the story of Mevan Induruwa, one of the brightest stars in the Sri Lankan University system.

"My father was an athlete and a badminton player, so he wanted me to do badminton as a sport at school. I started badminton when I was in grade 4, then switched to basketball, but I wasn't that good in coordination sports. So I gave karate and athletics a try in grade 6. What still makes me laugh, is the fact that I didn't continue any of those. Apart from swimming, athletics was the only other sport I properly did at least until ninth grade. But I have to say that the mind sport Scrabble was something that I continued to pursue. I did eventually go on to become the Vice-Captain of my school team and we became Under 19 Division A' Champions at the All Island Scrabble Championships in 2015."

"My connection with swimming runs back to the days I was just a 5-year old kid. That's when I learned to swim. I used to train at the SSC (Sinhalese Sports Club, Colombo) for the fun of it. So I wasn't a stranger to the pool when I started swimming in school as a 10-year old boy since I had already learned the skill when I was very small."

Mevan who started swimming as young as a 5-year old kid had reached a peak of as high as a National Title by the time he was 21 and had to stop competitive swimming (training day in and day out pursuing swimming as a full-time thing) when he started his medical studies. These 16 years of his life with swimming has been nothing short of a roller-coaster. The personality that Mevan has now transformed into is a product of all those years of toil and hard work. This shows us why being seriously involved with a sport as a youngster is so vital for the moulding of a strong and versatile personality.

Mevan started his schools swimming career with a bang in 2008 breaking the Sri Lanka Schools U11 Record in the 50m Breaststroke. Then he flew to Japan for the '6th Asian Age Group Swimming Championships 2009' representing Sri Lanka in the U15 Age Group - he actually should have competed in the U13 Age Group as he was just 12 years old.

Then came his first major setback. He missed a lot of important meets due to dengue and his performances started to go down. "I started to lose my best events - 50m Breaststroke, 100m Breastroke and 50m Butterfly. I came second in the Junior National Championship, I couldn't win. For me, that was like a big loss because the rise was so fast that I was not ready to accept defeat. In the following year, things got worse and I started to miss out on podium finishes too."

Then he started to realize his potential to swim long distances after joining the academy of Killer Whale Aquatics coached by Manoj Abeysinghe (coach and father of Sri Lankan Olympian Matthew Abeysinghe). It was during this period in 2012 he swam the 'Galle Face 5 Km National Sea Swim Marathon' for the first time, just to try it out, and ended 5th as a 15-year old. Mevan then started to win medals in the 1500m Freestyle in several meets and was regarded as one of Sri Lanka's best swimmers of the 1500m Freestyle during that period. He then got to compete in the '4th Asian Schools Swimming Championships 2013' in Macau.

Another setback hit Mevan. The long hours of training put into master his skills in long-distance swimming was starting to take a heavy toll on him. He made a decision and backed off from long-distance swimming and shifted his focus onto middle distance events. Amidst a hectic workload as an AL student at S. Thomas' College Mt. Lavinia who was also a steward, Mevan bounced back again in 2015 breaking the Sri Lanka Schools U19 Record in the 400m Individual Medley. In the same year, he also trialled for the South Asian Games (SAG) which was to be held in 2016.

In the meantime, he experienced his first taste of sports volunteering during the 137th Battle of the Blues Annual Cricket Encounter between S. Thomas' College and Royal College Colombo. In the next edition, he had to shoulder more responsibilities as he was a Senior Prefect of the College by then. In swimming, Mevan's next major achievement was taking part in the 'South Asian Aquatic Championships 2016' which took place in Colombo, which was soon after his ALs. He then made a switch of academies and joined the academy of Rainbow Aquatics coached by Sri Lanka's legendary swimmer Julian Bolling.

His inborn talent for long-distance swimming was proven again with his performance in the '7th Asian Open Water Swimming Championships 2017' in Malaysia, for which he got selected soon after 'revisiting his passion for long-distance swimming at Rainbow Aquatics'. He placed 18th in the '10 Km Swim Marathon' timing one of the best times clocked by a Sri Lankan in a 10 Km Open Water swim to date. In the same year, he also won the Bronze in the 'Mirissa 10 Km National Sea Swim Marathon'.

Following his second attempt at ALs, to which he invested a lot of time and gave his best shot, he joined the Sri Lanka Army for swimming and in 2018 became the National Champion of the '5 Km Open Water Swim Marathon' for the very first time. This paved the way for two more tours. He finished 19th in the 'Nantou Sun Moon Lake International Swim Marathon 2018' in Taiwan before going to Abu Dhabi, in his own words, 'for the biggest meet I have taken part in my life'. The 'FINA World Marathon Swim Series 2018' is to date the biggest event Mevan has taken part in.

During this same period of post-results waiting period before joining the university, he worked as an intern at Pro-Am Serendib (Pvt) Ltd. While working here Mevan led a team of volunteers organizing the IRONMAN Triathlon in 2018 and several other sub-events held simultaneously. Fast forward 2 years ahead, Mevan is not merely a swimmer now. He has moved on far beyond just a sportsman. Apart from being a 3rd-year medical student, he renders an enormous service to Sri Lankan sports. He is a sports journalist and also a sports volunteer. As a volunteer, he is all set to take up the biggest volunteering role in Sri Lankan University Sports, the role of FISU Student Ambassador for Sri Lanka.

We, his colleagues at MoraSpirit, would like to wish him all the best for a successful tenure and to make a strong and influential impact in improving the standards of Sri Lankan University Sports.