A ton of tons or a Ben Stokes? 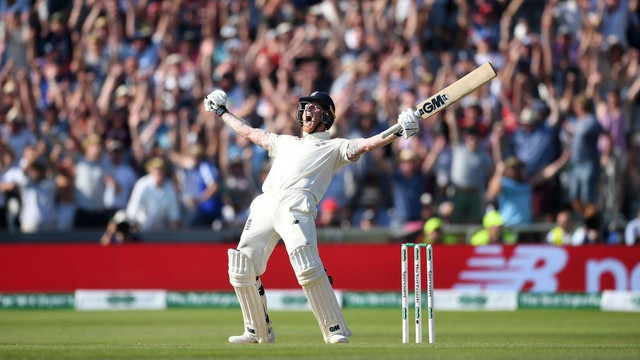 A ton of tons or a Ben Stokes?

A very interesting debate I quite often happen to involve with my cricket enthusiast friends is that, is Virat Kohli or Ben Stokes the greater cricketer? My counter-argument this which always lets me walk away satisfied is that passion, dedication and hard work at an extraordinary level can produce a consistent and ever-reliable powerhouse like Virat Kohli, but a Ben Stokes, a player who is just ordinarily consistent yet could single-handedly win unwinnable matches consistently, will only be produced when he manages to keep his head high even after going through several back-to-back dead lows in a short period.”

What puts Stokes ahead of Kohli in terms of greatness is the process which he went through to reach the position where he is now. Kohli too did have hard times, but they were brief and he has been the same superstar he is now for most of his career. It is the kind of career every human being dreams of. Just perfectly scripted and very very rare. The sequence of events which I regard as the process Stokes went through to reach greatness, tested his ability to remain strong by putting him in situations where his reputation and confidence were broken into pieces quite visibly and clearly.

Imagine the hit your self-confidence takes when you fail to defend 19 runs in 6 balls when you are playing for your country. How bad would you feel if it was off consecutive sixes in the first 4 deliveries you bowled? Now imagine how hard it would have been when the game your team lost just because of you was a World Cup final. And that too when you are just 24 years and with 5 years of experience in international cricket. Your reputation as a player gets completely vanished and redemption is the furthest thing for you at that point.

The English cricket management then decided to make the exact player because whom they lost a World Cup, Vice-Captain of their team which will head to Australia for the most important cricketing fixture of the English calendar, The Ashes. The World Cup they lost was in 2016 and was in the T20 format while the Ashes which is a series of 5 Tests was scheduled to be played during the 2017/18 Aussie summer. Different format, different year, but the question was ‘is Stokes strong enough to handle pressure?’ Leave it aside, he then got himself ruled out from the team for 5 months after getting involved in a brawl outside a bar putting his discipline as a player and a human in question. Then the question was not just his ability to handle pressure, but also his temperament to be an international cricketer. The test of his ability to weather the storm against him was now added with so many questions to answer, about his weaknesses which had been exposed previously, each time he made a comeback.

In the meantime, England have been building an ODI team with Stokes as an integral part of it since their early exit in the 2015 World Cup targeting the 2019 World Cup at home. Stokes had just returned after going through all sorts of trials and interrogations by the time the World Cup was just 1 year away. His form leading up to the big tournament was also not up to the expected level.

Then happened the summer of his life. The world saw a great cricketing warrior in Benjamin Andrew Stokes. He emerged as an ultimate team man every captain dreams to have. A complete cricketer who could do anything on a cricket field. Not consistent on paper, but with impactful performances on every occasion his team needs. Not the player crowds will flock to watch, but the player who’ll keep his team away from defeat and closer to victory every possible time. He won the World Cup for England with so many memorable performances throughout the tournament including a man of the match effort in the all-important final against the country in which he was born, New Zealand.

A few weeks later, Stokes went on to produce an incredible Test innings guiding England to a historic win in the 3rd Test in Headingley, keeping the Ashes alive after they were trailing 1-0. He has now transformed into a player which every opposition team fears. Not because he will blow you apart with his batting or bowling, but because he’ll somehow stand against your win with either bat or ball. He’s not the fan favourite, but the villain for every team playing against him.

In both these major competitions for England, Stokes’ role was the toughest one. ‘You are the star all-rounder upon whom your team relies in tough situations’, that was his designated role – just crystal clear.&nbspYou might go unnoticed if the batsmen and bowlers deliver a clinical performance while you are responsible when they fail, and that’s when you, the star all-rounder, cannot fail. The exact thing happened in the final against New Zealand. He had to perform and he did perform, not just to save his skin but to take them across the line.

In the Ashes Test in Headingley, a fighting knock to save the game itself would have made him a hero. But that’s not what he believes in, he went all the way to win it. He did not even raise his bat when he reached the century. Yes, it was the same old Stokes who’s temperament as a cricketer was questioned a few years ago. He didn’t panic on the fact that they were 9 down and the batsman at the other end hardly could bat. Once again a big yes to the question ‘can Stokes deliver under pressure?’. He even took handling pressure to a whole new level by showing courage to reverse sweep Australia’s best spinner for a six during that tense run-chase. He had learnt from his previous mistakes.

Even though England won the 2019 World Cup final on the boundary count after the game was tied twice, it’s not the way always. You won’t win matches on the number of centuries or number of 5-wicket hauls taken by your team members. But an individual who’s willing to be in the front line and make the crucial moves to ensure that the team as a whole marches towards victory and succeeds on almost every occasion he’s given the job is just difficult to be not labelled as a great or the greatest.

The clichés to achieve greatness as a sportsman are not enough. They might help you reach a certain level. When your level of pushing to be great is extraordinary, you’ll without a doubt be able to become a global superstar like Sachin Tendulkar or Virat Kohli. But the character that develops in you by facing challenges and overcoming those while improving yourself by learning from mistakes, can take you a step ahead of them and make you a Ben Stokes.