"When it Comes to Javelin Throwing, I rarely Came Home without Winning Something"—Ahinsa Jayamini 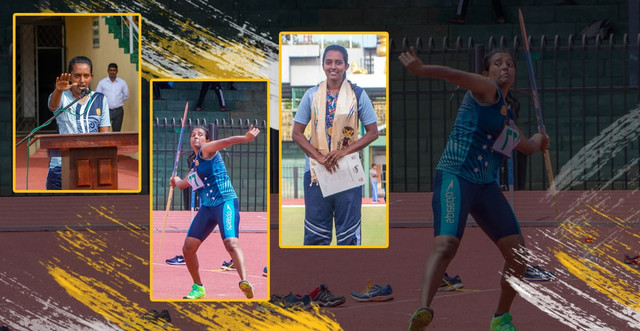 "When it Comes to Javelin Throwing, I rarely Came Home without Winning Something"—Ahinsa Jayamini

Of the mesmerizing women in Sri Lanka’s university sports, Piyumi Ahinsa Jayamini is an exceptional athlete who displayed her talents in multiple sports including elle, netball, volleyball, basketball, and athletics.

Here is her story of starting from the very beginning and reaching the top of the peak in her own words.

What stirred your passion for sports?

I believe that the main factor that made me passionate about sports was seeing all these exceptional sportsmen and women from Sri Lanka achieving exceptional feats in the international sports arenas. I specially remember eagerly watching Susanthika Jayasinghe competing in the 2000 Olympics and seeing her win the bronze medal.

I was into sports from a very little age. I was often encouraged by my teachers and relatives to engage in sports. I enjoyed being active and playing since younger days, and I think that along with all those memories of seeing other sportsmen and women, that played a major part in keeping me interested in sports.

Did your enthusiasm for sports originate from your family background?

I did not exactly have a so-called ‘sporty’ family background, nonetheless, my parents did not object to me being engaged in sports. Of course, just like any other parent, they were a little worried at the beginning that I might not be able to properly handle my academic activities and sports. Once they saw that I had no trouble balancing the two, they did not worry. Even though they themselves had not engaged in any sports, they were passionate about sporting events. I guess that their enthusiasm towards sports may have influenced me to a certain extent.

How involved were you with sports during your school years?

As I said earlier, I got involved in sports from a young age. After I passed the Scholarship Examination, I went to Gampaha Yashodhara Devi Girls’ School. I believe that I have always had the vigour and the good stature a sportswoman needed. So, I started engaging in sports in grade six.

I first played netball and our school had quite a reputation for netball as well. About two years later I, accidentally, got the chance to throw the javelin at the school sports meet. And won second place even though I had no prior practice at all. Later, the students who won at the sports meet got selected for the Divisional and Zonal level sports events. From that point onwards, I started training for javelin. Winning first place in that Divisional Sports Meet was how my journey as a javelin thrower came into being.

I was always actively engaged in almost all the sports during the school’s annual sports meets, and I really enjoyed how it tested different parts of my strength and endurance. But it was javelin throwing that became my forte.

Even during my school years, I achieved quite a lot in javelin. I won first place in javelin throwing in the Western Province Inter-School Sportsmeet for 2 consecutive years. In one of them, I set a record distance of 29.60 meters for under 15 girls’ javelin throwing. Not only that, I got the opportunity to lead the school’s sports teams during many events. Looking back at these memories, I remember how amazing and mesmerizing those days were.

What made you stick with javelin throwing since school days up to your university years?

I started as a track and field athlete when I was in Grade Eight. I was guided by Ms. Indra Amarasekara and later by Mr. Susantha Kularathna. There are two main reasons why I chose javelin throwing and not any other sport. One was the fact that I continued to achieve victories through this sport. I’m not saying that I’ve never lost a game, I have, but when it comes to javelin throwing, I rarely came home without winning something. I believe that it really inspired me to put my major focus into javelin throwing. The other factor was that I received proper guidance from my trainers throughout my journey.

I actually did stop engaging in sports once I started my Advanced Levels, but once I got into the university, I got back into sports again. In my first year, we had a Freshers’ Meet and that was when I got back into sports. Even today, even though I do not play anymore, I often go to university training grounds and share the experience and knowledge I gained from years as a javelin thrower with the trainees. I received the same mentoring from the coaches in my university and I wish to give back as much as I can to the current undergraduates as well.

What were the most outstanding achievements you accomplished during your years at the university?

However, to me personally, the most outstanding achievements of my sports career are the ones I achieved right here during my university years. I have been a part of the athletic, netball, and elle teams since 2016. In 2016 the Sri Lanka University Games (SLUG) was held in Wayamba University and I won javelin throw 1st place with a new record of 39.40 meters. In 2017 I won 1st place for javelin throw in Inter University Games.

In 2018 I joined the basketball team as well. One might think that I had my plate full with all those other sports, but I still managed to achieve first place in athletic events in 2018 too, along with 3rd place for elle. In 2019, SLUG was held in our university, and there too, I won 1st place for javelin throw and 2nd place for elle.

I am really proud that in mere 4 years I achieved 14 colours altogether. To be honest, that is personally the most outstanding achievement of my sports career. I can’t put a limit on what I have earned by engaging in multiple sports. I have met so many amazing people, I have learned so much, not just about sports, but life skills too and I have had amazing experiences that shaped my life up to who I am today.

What challenges did you come across in your sports career so far? How did you manage to overcome them?

As student-athletes, the major challenge we face is having to balance our academics and sports. As for me personally, I was in the Engineering Faculty of the University of Ruhuna. Even though the university was located in Matara, our faculty was in Galle. Therefore, for practices, we had to travel to Matara on a daily basis.

Entering the university, I knew where my focus should lie, which was getting my degree, and as the years went by, I felt that I gradually adjusted to this challenge as well. So, I gave my best focus during lectures, I have never skipped any lectures either. I believe that I overcame this challenge because I had adjusted my lifestyle according to the tasks I had to do so that I could manage both my academics and sports career without any issue. Obviously, it is not easy to manage the time, especially when you are involved in not one, but many sports. To be successful in them, I had to sacrifice some things, too, but the results I got in return were worth those sacrifices.

Do you think any of those challenges were impacted by the fact that you are a woman?

I don’t think that I had any difficulties in sports just because I was a woman. But one thing I believe is that because of the society we live in, girls tend to put barriers in their careers themselves. So, one thing I had to do was to break down the wall of fear I had within me. I knew I could not succeed until I brought those barriers down. For example, if I had not gone for practice just because I was alone or because I was the only girl there, I don’t think I’d have reached where I am today. I personally don’t think I had much to worry in this aspect because everyone around me was absolutely supportive, and it helped a lot in breaking down my inner barriers.

As a graduate and a current member of the university academic staff, do you think that there is a highly noticeable rate of reluctance among young ladies to join sports, especially at university level? If yes, what do you think is the reason for that?

Yes, the percentage of girls involving in sports is low. I have been an undergraduate in the faculty of engineering, and what I have usually seen there is not reluctance. Rather than reluctance, I think that many girls in our area of study do not tend to join sports because they are not used to do so. I think it is usual in Sri Lanka as many students, not only girls, who do their studies in the science streams don’t play sports. Other than that, I have not seen reluctance. But as for those who actually used to do sports and discontinued it at the university, I don’t think they were passionate about what they were doing, because  I have seen people who do a sport for the first time at the university and then go on to receive colours.

Is there anything that you think should be changed in university sports and how it operates to encourage more women to involve in sports?

I believe as of now we have received equal opportunities in almost everything. There is rarely a sport where there is no women’s division included. Other than that, I don’t bear the opinion that sports are something that could be forced upon a person. A passion for sports has to exist, otherwise, it won’t prevail. As a whole we may take actions to encourage all students despite the gender but I doubt there is anything more to be added when considering the opportunities given at the moment.

I think it would be better if I am to address the category of students who aspire to join sports. The main reason that makes us hesitant to join any sports is the fear that we would not be able to balance academics and sports. I would like to strongly state here that sports are something that would never interfere with your academics. It is just another stereotype that we can break if we set our mind to it.

The physical and mental capacity one can build with sports is something that you cannot gain from anywhere else. The benefits you receive by engaging in a sport are just immense. Specially, the personal development you receive when you engage in sports. They build up your team spirit, leadership qualities, activeness and social exposure. These are qualities would help you through the rest of your life, be it your career or personal life.

If you feel like you might not be able to handle both academics and sports, there are plenty of role models who have done so, and a glimpse into their life might help you understand how to do it. If there is anyone who is reluctant to join sports, I doubt there is much effect in trying to get them engaged in any sports as there would not be any passion to drive them forth in sports.

With this wonderful insight to sports, she concluded her interview. We wish that she would achieve the best in her upcoming endeavors as well.