An Olympics without Bolt: Who to watch out for? 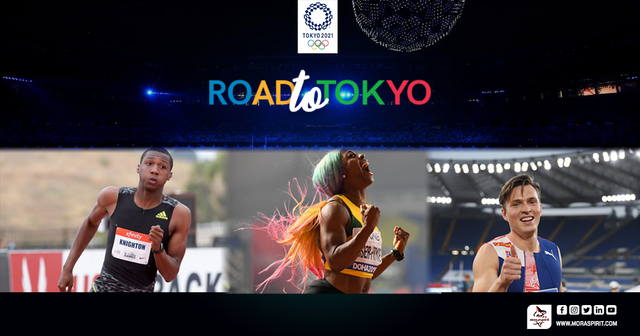 An Olympics without Bolt: Who to watch out for?

After nearly half of the Olympics having commenced athletics finally makes its way on to the schedule with the first events of the programme starting on the 30th of July inside the Japan National Stadium. This will be the first Olympics since 2004 missing the outsized personality of Usain Bolt but that does not mean there aren’t several generational talents on show, including two of our local athletes on show through 100m sprinter Yupun Abeykoon and 800m runner, Nimali Liyanarachchi. Here is a look at some of the more fascinating storylines in play at the Tokyo Olympics.

Though not in detail, it would be incomplete if I don't mention about Grant Holloway of the USA and Armand Duplantis of Sweden going for potential World Records in the Men’s 110m hurdles and Men’s pole vault respectively, Yulimar Rojas of Venezeula for another potential world record in the Women’s triple jump, a Ugandan duel between Joshua Cheptegei and Jacob Kiplimo in the Men’s 10 000m, the current Women’s 100m hurdles world record holder Kendra Harrison seeking redemption for missing qualification for the 2016 games, Timothy Cheruiyot of Kenya vs Jakob Ingerbrigtsen of Norway and Eluid Kipchoge, the first man under 2 hours (not in official competition) in the marathon out to defend his Olympic title

Who will be Bolt’s successor?

The 100m is generally the showpiece of the entire athletics programme, with the title of ‘fastest man in the world’ up for grabs. Travyon Brommell of the U.S.A should be the favourite for gold with Akani Simbine of South Africa and Ronnie Baker of the United States being the main contenders while past medalists Andre De Grasse and Jamaican Yohan Blake will also be on show. Yupun Abeykoon, the fastest man in South Asia will also be looking to stamp his name on the event.

Ever since the summer of 1988, Florence Griffith Joyner’s records in the women’s 100m and 200m have seemed untouchable. Might 2021 be the year they finally fall? The chances are slim, but it has been a while since they have looked quite so fallible.

Shelly Ann Fraser-Pryce of Jamaica became the second fastest athlete of all time in the 100m earlier in the year with a 10.63 run and will be going after her third gold medal in the event. She faces stiff competition from defending champion and countrywoman, Elaine Thompson-Herah and Dina Asher-Smith of the UK as well as Blessing Okagbare of Nigeria who ran a wind assisted 10.63 time this year.

In the 200m eyes will be on Gabby Thomas, who became the second fastest woman over the distance in the US trials. The familiar names of Fraser-Pryce, Thompson-Herah and Asher Smith (the defending world champion) as well as Bahamian Shaunae Miller-Uibo will also be strong contenders in what is a stacked field.

Erriyon Knighton- the next big thing?

Knighton, a 17 year old sprinter from the United States is USA’s youngest track and field athlete since 1964. In 2021, he broke the world U-18 record in the 200m held by Usain Bolt and bettered it in the heats of the US trials. In the semifinals he broke the U-20 World record, also held by Bolt and went on to better it in the finals on the way to 3rd place. He will be targeting Olympic glory while still in high school. Favourites for the event will also include the world champion Noah Lyles, Kenny Bednarek as well as Andre De Grasse. Keep an eye out for the unique running style of Liberian NCAA champion Joseph Fanbulleh who also has the potential for a few surprises.

The return of Van Niekerk

Olympic Champion and world record holder, South African Wayde Van Niekerk delivered arguably the performance of the 2016 Rio Olympic Games but his recent years have been dogged by major injuries. It is yet to see if he is back to his best and under the circumstances the favourites for the 400m will be Michael Norman of the United States and world champion Steven Gardiner of the Bahamas with Kirani James of Grenada and Michael Cherry of the US expected to feature too.

One last Olympics for Alysson Felix

35 year old Alysson Felix is back again in the 400m and will be targeting another medal (to add to her 6 golds and 3 silvers) to become the female track and field athlete with the most Olympic medals surpassing Merlene Ottey. She takes her name in a wide open field including team mate Quanera Hayes and Jamaican Stephanie Anne-Macpherson. In the absence of world champion Salwa Eid Naser, Shaunae Miller Uibo, the Olympic Champion would generally be the favourite but she is yet to confirm her participation in the event which would set up a rematch of the 2016 final between her and Felix which ended so dramatically.

World Records to fall in the 400m hurdles?

Both the men’s and women’s 400m hurdles see the current world record holders in action. In the men’s event Norway’s Karsten Warholm recently broke Kevin Young’s longstanding world record from 1992 and is considered the favourite, but running him close will be the third and fourth fastest athletes of all time in Rai Benjamin of the United States and Abderrahman Samba of Qatar. In fact, three of the four athletes to go under 47 seconds in the event will be on the starting line in Tokyo.

The women’s 400m has long been dominated by Dalilah Muhammad of the United States, but her heir apparent in Sydney McLaughlin had been gradually improving over the last few years before finally stamping her authority with a world record breaking performance at the US trials. These two athletes, the fastest two in history will square off once against at the Olympics and similar to the men, 3 of the 4 fastest athletes in history will be lining up with this 3rd athlete being Femke Bol of the Netherlands.

A prodigy who recently dominated the US trials despite stumbling in the early stages of the race, Athing Mu’s performance at the Tokyo Olympics will make for interesting viewing. However, the 800m is loaded with wonderful talents including Natalya Ghoule of Jamaica, Rose Mary Alamaza of Cuba at Werkwuha Getachew of Ethiopia which should make for an intriguing battle on the track. Nimali Liyanarachchi of Sri Lanka will also be racing in the event and will be coming up against World silver medallist Raven Rogers in her heat tomorrow.

After achieving an unprecedented double gold medal performance in the Women’s 1500m and 10 000m at the 2019 World Championships, Sifan Hassan of the Netherlands is gunning for a truly monumental feat by going for a treble in the 1500, 5000 and 10000m . She will be an undoubted favourite for the medals given that she currently has the one mile and 5000m world records and also broke the 10 000m world record earlier in the year, before it was again broken by Letesenbet Gidey of Ethiopia. However, it is yet to be seen if her versatility becomes a hindrance and fatigue comes into the equation. Watch this space

Will Kenya continue their steeplechase dominance?

Kenya has dominated the Men’s Steeplechase ever since 1984, winning every single gold medal on offer at the Olympics since then. This year’s trio of athletes in  Leonard Bett, Benjamin Kigen and Abraham Kibiwott will be looking to continue this tradition while those aiming to break this dominance will be mainly Soufiane El Bakkali of Morocco and Lamecha Girma of Ethiopia.

After making its world championship debut in 2019, the mixed 4x400m relay will be seeing its Olympic debut. This event consists of two male and two female runners running 400m each in any order (Male, Female, Female, Male is most commonly used). The USA are the current world record and world championship holders and this event as well as the Women’s 400m will present another chance for Alysson Felix to become the most successful female track and field athlete in Olympic history. While the USA should be strong contenders for all the other relay titles, except a fascinating duel between USA and Jamaica in the Women’s 4x100m relay.

Another example in versatility, JuVaughn Harrison won the US Olympic trials in both the Men’s high jump and the long jump and will again be doubling up at the Olympics, being a strong contender in both. The long jump will see the challenge of world champion Jamaican Tajay Gayle and Juan Manuel Ecchavaria of Cuba as well as a surprise name in Miltiadis Tentoglou of Greece. The high jump also sees Mutaz Essa Barshim of Qatar, the second highest jumper of all time and the reigning world champion going for his first Olympic Gold.

Four Athletes who have dominated their respective events over an extended duration will be targeting this historic achievement at the Olympics. Sandra Perkovic of Crotia, Anita Wlodarczyk of Poland, Valerie Adams of New Zealand and Babara Spotakova of the Czech Republic will be going after gold in the Discus, Hammer Throw, Shot Putt and Javelin throw respectively. However, even though they are still at the top of their sport they are not the dominant forces of their earlier events and will face strong challengers in their quest for history.

Undoubtedly the greatest javelin thrower in history, Jan Zelesny’s world record has stood untouched since 1996 and to tell the truth few have ever come close to breaking it. One of the closest has been German athlete Johannes Vetter coming within 72 cm of the world record. Neeraj Chopra representing India also warrants a mention as a realistic chance to win India just their second Olympic medal in athletics and their first since 1900.

In what could turn out to be one of the matchups of the entire athletics programme, Nafissatou Thiam of Belgium, the reigning Olympic Champion and Katarina Johnson-Thompson of the UK, the reigning world champion face off in what promises to be a fascinating duel in the pentathlon. While the British Athlete has generally held the advantage in the long jump and 800m, Thiam compensates with her strong Javelin and Shot Putt. Expect the strong US trio to put up a good fight as well.

Even with Bolt’s absence, this could indeed turn out to be a golden era for world athletics with several world class talents facing off in the Tokyo Olympics and it should be a fascinating watch over the next ten days to see which athletes achieve glory.