Basketball Quarter Finals Set the Standards of the Tournament 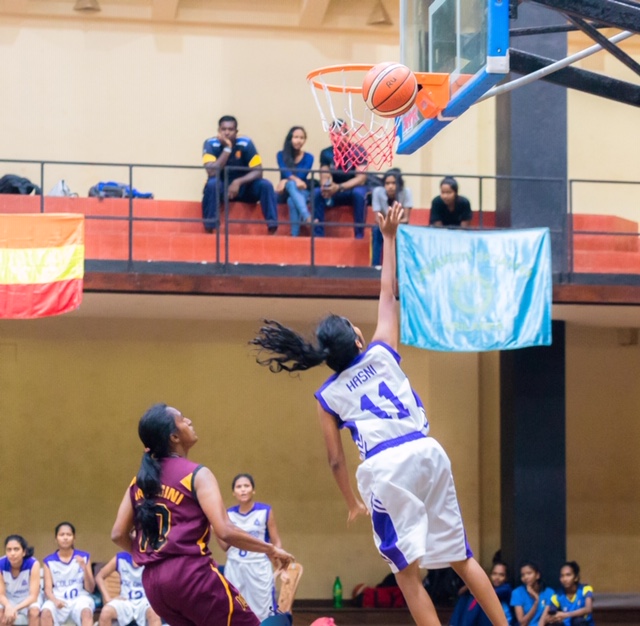 Basketball Quarter Finals Set the Standards of the Tournament

The third day of the Basketball Tournament of SLUG 2019 was an exemplary display of the beauty and uncertainty of basketball. Quarterfinals of both men’s and women’s categories were concluded with the emergence of the four teams from each category into the semifinals, which will be held tomorrow preceding the finals.

Pera took on Jaffna in the first quarter-final of the day. The defeat to Japura in the preliminaries demoted the Pera team to the runner-up of Group B while Jaffna entered the game as the winner of the tough Group D. For much of the game Jaffna succeeded in keeping even a minimal lead ahead of Pera. However, crucial points added by Fernando and Abeyrathne during the final quarter were adequate to overcome that point deficit and reach a final score of 30-25, which secured Pera the first spot in the semifinals.

Group C winners, Mora and Group A runner-up, Ruhuna faced each other in the second quarter-final. Ruhuna girls drew the support of their home crowd in an attempt to align all the stars for their victory. But they fell short against the Mora team who had already beaten last year’s 2nd runner-up, Kelaniya, in the preliminaries. Despite their superb defensive display, both teams lamented their unconverted chances but only Ruhuna had to pay its price. Hence the final score read 26-17 in favor of the Mora team.

Undoubtedly, the best game of the women’s quarter-finals was between the Sabara and Japura teams. In a gripping display of fast-paced basketball, Japura came on top with just a four-point lead at 26-22. If this was a low scoring game, it was not for the lack of actions, but the fierce defense enforced by both teams. It would have been the desire of neutral spectators to see both teams continue in the tournament, but the nature of the tournament demanded only Japura could secure a place among the semifinalists.

The final women’s quarter-final between Colombo and Kelaniya concluded with an easy win for Colombo. They secured an over 20 point lead with a final score of 43-20. Led by Hasni Gunarathne, Colombo proved to be a formidable opponent to look out for in the semi-finals.

Today, in women’s semi-finals of the basketball tournament, Mora will take on Japura and Colombo will take on Pera in the battle to decide who walks on to the finals.

Jaffna was unable to contain the attacking force of Sabara as they were beaten by a 49-27 scoreline. Even though Jaffna appeared to be fighting back in the initial stages of the game, they gave in to quick passing and fast breaking attack led by Venu of the Sabara team.

No game of the day was as nerve-wracking as the game between Kelani and Pera. Basketball was at its scintillating best when Pera beat Kelani in what was literally the final second of the game.

Not long before the final whistle, the lead was oscillating between the two teams faster than a pendulum. A three-pointer scored by Kelani in the final 40 seconds was followed by a successful free throw for Pera. The rebound of the second free throw presented Kelani a chance to add two more points via a fast break. Pera once again received two free throws which they successfully converted and at this point, the final 11th second of the game, the score was tied at 36. Then came Pera’s last shot in the last second of the game and their victory. The ball neatly lowered into the ring, securing a two-point lead and a 38-36 scoreline, and the final whistle blew much to the pleasures of the celebrating Pera team.

Mora took on Colombo in the third quarter-final of the day. Mora, who was not up to their very best as they beat Jaffna in the preliminaries earlier yesterday, had found their form back for this game. The game was never out of reach for either team until the end. But Colombo was unable to break past the solid defense of Mora to find the victory. The game ended 44-37 in favor of Mora.

The Eastern University team was easy prey for Japura as they were beaten 45-24 in the final quarter-final of the day. The result finalized the semi-finalists who will be battling to reach the final today.

The two semifinals, Mora vs Pera and Japura vs Sabara, will be held today at the gymnasium of the University of Ruhuna.