Black and white kings and queens are ready to conquer the board. 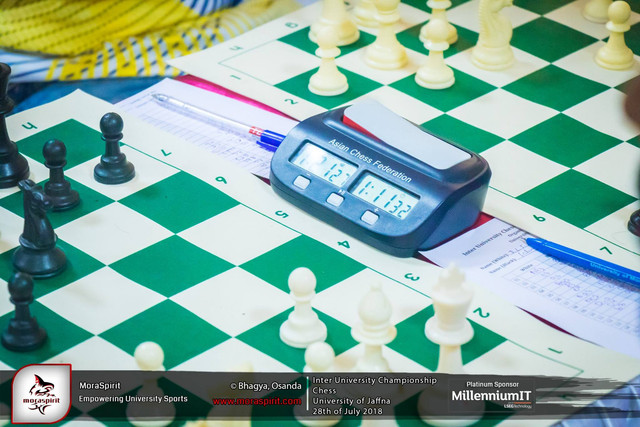 Black and white kings and queens are ready to conquer the board.

Sri Lankan University Games emerge as a multi-sport complexion which held once in three years. This year, all University sport lovers are excitingly looking forward to witness the indoor and outdoor battles of SLU XIII hosted by University of Ruhuna, as the SLUG XIII forwards with victories and defeats. Without any doubt, amidst the number of field games, a board game will brings diverse outlook to the SLUG games. The stage is set for the team chess tournament of the SLUG XIII to be held at UOR&nbspon 5 th,6th and 7 th of September with the participation of over 12 teams in both men and women from all island universities. All the chess contenders are eagerly waiting to show their upmost skills and talents to make their almar mater towards the champions.

Chess is a game of board played by two players with 32 chess pieces to capture the opponent’s king. It involves logical strategy to keep the king safe at all the times, and not to blunder the pieces away for free. The one who could find the best move, best plan and tactic continuation out of endless possibilities will be able to ignite the flame of victory by making the checkmate. Moving back to the chess achievements of the SLUG history ,in 2016 ,among the women’s chess teams , university of Colombo was crowned as the champions after a tight battle between universities while University of Peradeniya being the 1 st runners up and University of Kelaniya&nbspsecuring the 2nd runners up title. Men’s championship was grasped by University of Sri Jayewardenepura beating &nbspuniversity of Peradeniya while 2nd runners up title was owned by University of Ruhuna.

The championship will be played with a team of 8 players from each university in both girls and boys. The total number of players for the championship will be over 100 from all the universities. They will play 5 rounds and the team which scores the highest will claim for the trophy. Players granted one-point (1) for a win, a half (½) point for a draw, and no points (0) for a loss toward their tournament score. If the team scores more than three out of 6, they become the winners of that particular round.

We as MoraSpirit will bring you the move of chess pieces of the black and white battle as it goes on. Stay tuned with MoraSpirit to witness the passion behind the glory of moving chess pieces.