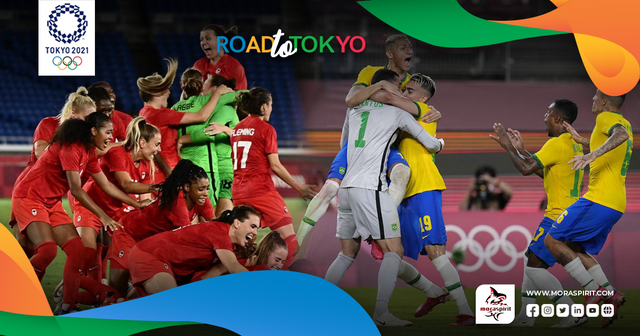 Canada and Brazil became football champions at the Tokyo Olympics following two finals that kept the spectators on the edge of their seats until the final minutes. Canadian women’s team beat mighty Sweden in a dramatic penalty shootout that ended 3-2, while the Brazilian men beat Spain 2-1 in the extra time in a final no one could call the favorites.

Canadian women had a fantastic Olympic campaign that saw them defeat the current world champion, United States, 1-0 in the semi-final and No.5 ranked Sweden in the finals to win their first Olympic gold in history. They started the final on the back foot as the Swedes dominated and scored first at the 34th minute with a wonderful finish by Blackstenius.

But Canada players returned to the field in the second half with renewed vigor to take on Sweden. They got their opportunity to equalize the score in the 67th minute off a penalty call when Sweden’s Amanda Ilestedt brought down Canadian striker Christine Sinclair in the penalty box. Even though the foul wasn’t called during the gameplay, VAR intervened to award the penalty to the Canadians, and Jessie Fleming converted it from the spot with ease.

The game went to extra time with a score of 1-1 at the end of regular time. With neither team scoring during these 30-minutes, the match went to a penalty shootout to find the champion of women’s football. Stephanie Labbe, the Canadian goalkeeper, became the hero of the shootout with two incredible saves and allowed Julia Grosso to score the final penalty that won them the gold medal with a lead of 3-2. This historic win paved the chance for Canadian midfielder Quinn to set a record as the first-ever transgender Olympian to win a gold medal.

On the back of a disappointing campaign by their standards, the US women won the bronze medal beating Australia in a high-scoring match that finished 4-3.

Following in the footsteps of women’s final, men too failed to find a winner during the regulated time of their game, taking it to the extra time, where the Brazilian winger, Malcolm, scored the winning goal in the 108th minute to secure their back-to-back gold medal in the Olympics.

In the final between Spain and Brazil, both teams went head-to-head against each other, making it difficult to call a favorite until the very last minute of the game. Brazil got their first opportunity to score when VAR awarded them a penalty for a foul made by Unai Simon, Spain’s goalkeeper. But Brazil’s Richarlison failed to convert from the spot with a kick that sailed over the crossbar.

Brazil’s next opportunity to score came in the extra time of the first half, and Cunha managed to beat the defenders to smash the ball to the back of the net to secure their first goal without fail this time.

But Spain fought back in the second half and scored their first goal off a brilliant cross from Carlos Soler, which Mikel Oyarzabal finished with cool efficiency. Even though neither of the teams scored again in the second half, their attacking attempts continued with much intensity as each team hit the crossbar.

With a tied score of 1-1 at full time, the game went to 30-minute extra time, following a trend we repeatedly saw in this tournament. Though both teams continued their relentless attacks in each other’s halves throughout the extra time, only Brazil could score the much-needed goal to secure their Olympic gold medal.

With their back-to-back Olympic gold medal, Brazil became only the second team ever to defend their Olympic title in men’s football. Brazil’s win became extra special to 38-year-old Dani Alves, the most decorated player in the football world, as he added one of the few missing titles to his list of 43 career titles.

The hosts of this year’s Olympics, Japan, failed to secure a medal in the tournament as they lost 3-1 to Mexico in the bronze medal match.