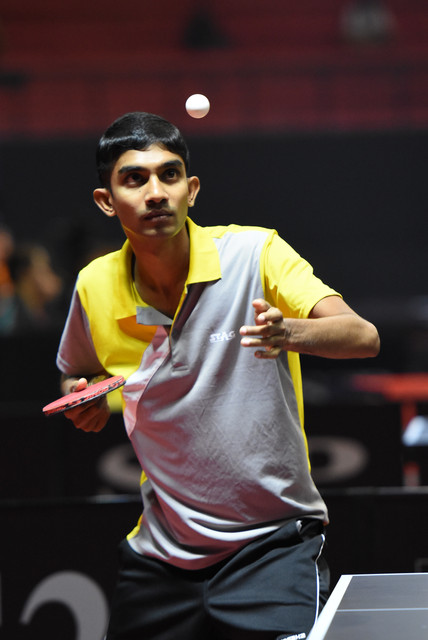 Among the numerous tournaments that define the international table tennis arena, World Team Table Tennis Championship is doubtlessly one of the most important. To lead the national team to such an event takes immeasurable amounts of talent, dedication and hard work. Chameera Ginige, the star player from the University of Sri Jayawardenapura who was selected as the captain of the team representing Sri Lanka at the event, definitely has them all.

Mr. Ginige was merely five years old when he first started playing table tennis. Since then, a series of remarkable achievements has studded his journey from an amateur to a successful sportsman. From the silver medal in Under-12 Team Event at the Tai Yuan International Junior Table Tennis Open Championships in 2004 to the Bronze Medals in the Team Event and Men’s Doubles at 13th South Asian Games in 2019, he has continuously displayed his brilliance in both national and international fields over the years.

However, his dream of playing for the national team of Sri Lanka was first realized in 2015, and since then, he has represented the country at numerous international events. The player was ranked 1st in the country in Open Men’s Singles in 2018 according to Table Tennis Association Rankings in 2018. Asked about his feelings towards the journey he has come, he mentioned that he believes himself to have given his best and done his best in sports.

Being a university student, managing his studies and sports activities was not the easiest task for him. In addition to spending two or three evenings per week practicing at the university, he dedicated most of his weekends to practicing at his school, Ambalangoda Dharmasoka College. Nonetheless, he successfully completed his education while excelling in table tennis.

Upon being questioned about his team for the World Team Table Tennis Championship, he stated that he is already familiar with his team members as he has previously participated in tournaments with them. While the team selections are not yet finalized, the Sri Lankan team is fairly confident that they will be able to show their colors against the other teams in their division and grab a medal. The team is competing in the 3rd division at the event this year.

Looking back on his years of experience as a table tennis player, Mr. Ginige advised the youngsters with big dreams about the game to always work hard to achieve their dreams. We at MoraSpirit wish the very best of luck for him and his team to do their very best and bring glory to mother Sri Lanka.