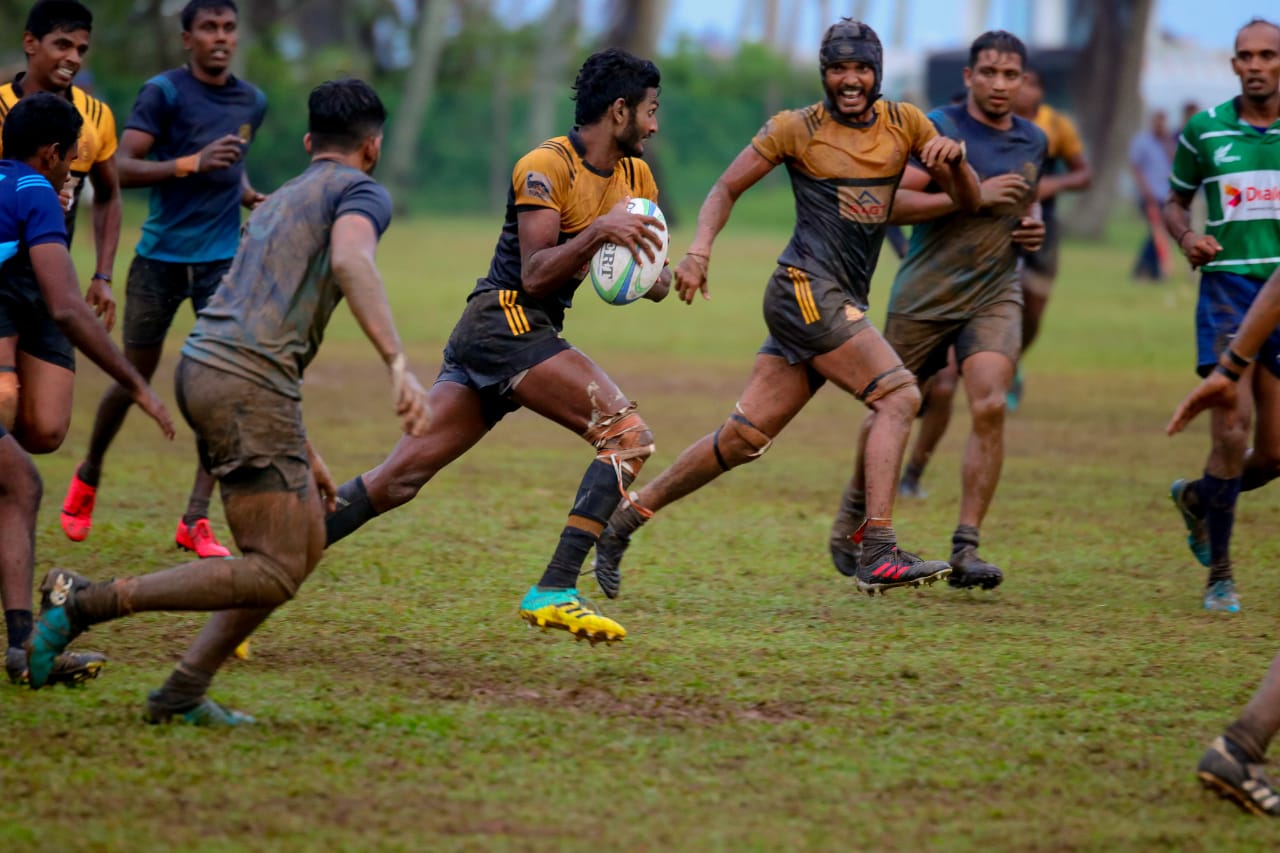 It was one way traffic at the Koggala BOI grounds as University of Colombo completed the #10yearschallenge as they defeated University of Kelaniya 39-00 to clinch the championship after 10 long years. The spirited Kelaniya unit played their hearts out in the finals but were unable to stop the onslaught of 7 tries by the marauding Colombo unit. Earlier during the day, University of Moratuwa salvaged a 07-05 win over arch rivals University of Peradeniya in a rain struck consolation finals.

Colombo the most dominant team from the start of the season kick started proceedings and Kelaniya were holding onto possession as if it were a life or death situation. However they were guilty of playing too much rugby in their own half and a turnover by Colombo meant the Kelaniya now had to switch gears into defense. After coming very close to the line, Colombo used a very slick backline move to score the first try of the finals.

Colombo scored yet another try through their winger who dived over the line and oncoming player to take his team up to 12 points. Earlier the number 8 who made a break from the scrum couldn’t go over the line but the winger did the finishing touches. Showing very clear intentions that they want the cup this year, scored their third try of the day leaving the Kelaniya defence with no answer.

Colombo was absolutely ruthless in attack as they were scoring every time they were in the opposition half. Just as things couldn’t get any worse, Kelaniya captain Minura Punchihewa was yellow carded for infringements close to their try line and it was easy pickings for Colombo who scored their fourth try of the game on the brink of halftime.

Kelaniya having a very uphill task were very spirited despite playing with only 14 men on the park minus their captain. They successfully turned the penalty over in favour of them, preventing Colombo scoring from a rolling maul. However they were unable to get out of their own 22 and their defence gave way towards Colombo’s 5th try. Nothing was going in favour of Kelaniya even after being restored back to their full team.

Colombo scored two successive tries with the final try converted as the Colombo scrum half sniped past all defenders from the blind side to score under the post. Despite Kelaniya reduced to 14 men once again, they played with heart to keep the ball in hand and drive forward in order to score a consolation try but only managed to turnover the penalty. With the penalty awarded, the Colombo fly half kicked the ball out of the park and the jubilant Colombo crowd swarmed in to celebrate the victory with the team.

Old foes University of Moratuwa and University of Peradeniya faced off in a rather unusual championship segment, the consolation finals whereas they have faced each other in the previous years in the grand finals. Both teams were playing for pride this time around, seeking redemption from their defeats last week.

Pera scored first in the first 10 minutes through a brilliant passage of play by using the pick and go to the maximum effect, drawing in all the defenders and finally letting lose in the blind side gap with captain Isuru Herath going over the line. The conversion was missed from the difficult angle. The heavy downpour followed afterwards and game progress was extremely slow. Mora using the pick and go were inching towards the try line and finally a long cut out pass to the right winger was easy scoring. Fly half Lakmal converted the try and quite ironically, that was the last time any side scored in the match.

The second half was a stalemate as neither team was able to put any score on the board, thanks to the inconsistent downpour, handling errors because of the wet ball and turnovers. Mora scrum half Sandaru Liyanage almost scored a brilliant try through the kick and chase but failed the foot race as the Pera defender managed to get a kick the ball away inches before the opposition try line. However it didn’t matter as the referee blew the long whistle with the score reading 07-05 and the old foes rallied round to commend each other’s efforts in the spirit of the game.