Conqueress of the goal rings in Ruhuna – Chamika Samarasinghe 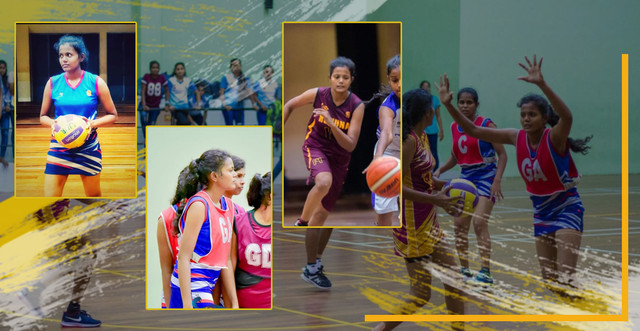 Conqueress of the goal rings in Ruhuna – Chamika Samarasinghe

In Sri Lanka, balancing sports and education is something many fear of doing. Even out of the few who do balance, a considerable number of students compromise on one – when they are better at sports they compromise on their studies and vice-versa. However, there are some rare cases who absolutely balance both, without compromising on any, but our star whom we are featuring in this story is someone who balances education not with just one sport, but another and two more as well.

Chamika Samarasinghe, a final year undergraduate of the Faculty of Humanities and Social Sciences of University of Ruhuna, has been playing Netball from the U12 age group for her school Ananda Balika National School, Hingurakgoda. Chamika, who is also a champion Discus thrower, started to play Basketball during her days when she was doing her ALs. Once she entered the university, after performing well in her academics alongside doing three sports, she also took up Taekwondo and she continued to do all these sports while obtaining good grades in her studies. Incredible!

“I actually didn’t have any idea of doing Taekwondo or any other sport because I was already involved in a few, but seeing my room-mate doing Taekwondo, seeing her going for practices, made me take up that as well”, Chamika told very casually when she was asked about starting Taekwondo, which is a martial art - something completely different to the sports she was already doing. Even though the way she took up the sport was so casual, her beginning was not so. She won the first Inter-Faculty Taekwondo competition she participated in and was qualified to represent the university in the 13th Sri Lanka University Games (SLUG) 2019. Incredible again!

Chamika, however, is more popular as the Conqueress of the goal rings – basically a champion Netball and Basketball player. When she was asked how she would call herself as, her answer was direct, “I’m a Netballer”.

Chamika’s Netball career hit its peak in 2012 when she was picked for the Kreeda Shakthi National Netball pool. Kreeda Shakthi was a national program introduced by the Ministry of Sports together with the Ministry of Education back in 2012, where national pools for several sports were formed from the best athletes in the school level. Chamika was lucky enough to be trained for nearly 3 years alongside Sri Lanka’s best Netballers of her age, under Sri Lanka’s best coaches during her time in the Kreeda Shakthi National Netball pool. She was also able to be a part of the team which represented Sri Lanka in the 23rd PESTA BOLA Jaring USM International Netball tournament in Penang, Malaysia in 2013.

Her Basketball career began later with a private club when she was still a schoolgirl. The switch from Netball to Basketball is not as easy as it sounds. Netball is a sport where you don’t dribble the ball whereas in Basketball dribbling is the most basic skill you need to master the sport. Even though passing the ball and moving in the court were skills she had been practising as a Netballer for years, when she started Basketball she had to go through intense training to get herself used to dribble the ball. “I used to dribble the ball all day long. Nearly a 1000 dribbles per day. Maybe more than that even, I don’t know, but I did a lot of dribbling in the few months I trained before my first Basketball match”, said Chamika so casually, showing how composed she is as an individual. She was able to play a proper competitive Basketball match for her club within just 6 months since she took up the sport. Impressive!!

She started playing both Netball and Basketball for the University team in 2017, the very first year she joined. After winning the award for the Best Netball player of the University in 2017 she was appointed as the Vice-Captain of the team in the year 2018, while she was just in her 2nd year. In that year she was able to inspire her underperforming team to their first-ever match-win in the Inter-University Netball tournament. The following year, in the all-important SLUG she led the University Women’s Basketball team to the round of best 8 for the very first time in the history of the university showing how good a leader she is. At the same time, we must not forget, in last year’s SLUG, she not only captained the Basketball team to a historic position but also was an integral part of the Netball team and took part in Taekwondo and Discus throw as well. Impressive again!!

Deservingly, she was rewarded with several awards and colours in 2019 – making it one of the most decorated years of her sporting career. Being awarded colours from the Sri Lanka Universities Sports Association (SLUSA) for her outstanding display of leadership with the Basketball team can be taken as the best of the lot. Along with university colours for both Netball and Basketball, she also became the best player of the university in both the sports. The year ended with a very special award, the special award for Netball, for the game most close to her heart.

Currently, in her final year, she has been bestowed with the reins to lead the university Netball team and unfortunately due to the prevailing pandemic, the Inter-University competitions are yet to happen and is doubtful of happening soon too.

So what’s next for Chamika? A dream to represent Sri Lanka?

The composed, ever-smiling wonder women, in her usual casual tone, went on to say, “That’s an obvious dream. I would definitely give my best if I get to represent the country.” But what followed after that was something we as Sri Lankans should take seriously, “If I’m to be honest, I was denied of several deserving chances. I was not informed or informed late when they had called for national trials. Thrice for Netball and once for Basketball. I don’t mind being rejected after attending the selections, but being deprived of an opportunity to give it a try hurts. I don’t blame anyone, but people in responsible positions should not let this happen again to anyone. The message should be passed properly to the deserving athletes. Every athlete should be given opportunities equally.” Heartbreaking!

She still has not given up as she went on saying, “Nothing can stop me doing the sport. I do it for the love and passion I have towards it. I’ll keep on playing both Netball and Basketball until I’m done”, said Chamika showing the grit beneath her calm personality. What an inspiration!

While winning all these achievements and feats, Chamika is still a university student - a final year BA undergraduate specializing in Geography. Life has not been a bed of roses for her. She hasn’t forgotten the people who were with her throughout her journey. She went on to pay her gratitude for the people she is thankful for, and she started her note with Mr. Kamal Sri Kanchana, her Netball coach back in school. Then Mr. DMD Jayathissa, her first Basketball coach. Mrs. Nilanthi Vithanage, her district Netball coach. Finally, relating her note of gratitude in her own words “the entire community of University of Ruhuna including, Renuka Abeywickrama madam, Ashoka Abeywickrama madam, Gemunu Sandarwan sir and Shasheen Divyanjana sir, the coaches who guided me in various sports and my beloved friends, team-mates and colleagues. Thank you very much!”