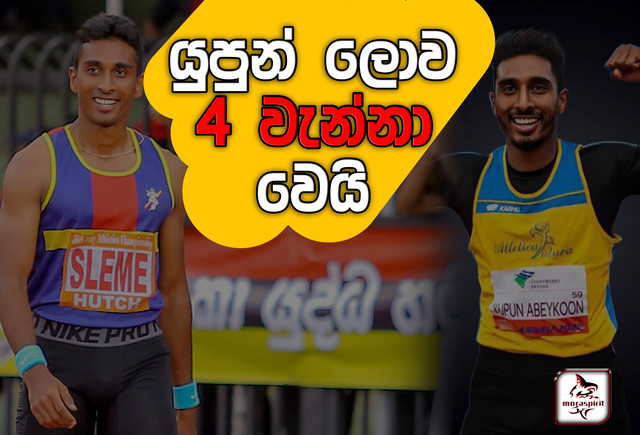 A boy from Pannala national school, who has set his eyes on making his mark in the Tokyo Olympics arena, has bagged yet another record.

Yupun Priyadarshana Abeykoon from Sri Lanka, who holds the record of South Asia’s fastest, has set a new record in Ancona, Italy, in men’s 60 meters at an indoor athletic championship on the 24th of January 2021. He managed to set a new benchmark of 6.59 seconds, surpassing his own record of 6.78 seconds set in 2017 at the same city. He is currently training in an Italian sports academy, under the watchful eyes of his two coaches-Claudio Licciardello and Maurizio, aiming towards his Olympics dream.

In 2004, Yupun Abeykoon sets his foot on the track for the first time and has gone on to make history, becoming the fastest in South Asia. He made his first appearance as a high jumper. Later on, he represented triple jump and won all island 4th place while he was in Pannala national school. However, moving to St. Joseph Vaz college was the turning point of his athletic life where he changed gears to emerge as a sprinter and went on to make his personal best in Sri Lankan soil-10.58 seconds, representing the national athletic team. Eventually, in 2015, he left Sri Lanka to train in Italy as a professional athlete. It was a brand new chapter in Yupun’s sporting journey.

Italy-based sprinter Yupun grabbed a gold in men’s 60 meters at the indoor athletic championship held in Ancona, Italy, renewing his own previous record time (6.78s). With his new record time of 6.59 seconds, Yupun wrote down his name as the world’s 4th fastest in men’s 60 meters at the 2020-21 indoor tournament, illuminating Sri Lanka’s name in the international level. This was surely a great inspiration for hundreds of young athletes in our country to gear up their game. Moreover, in the same event, Vinura Lakmal who represented Sri Lanka, managed to secure the fifth position with 6.86 seconds to his name. Furthermore, Yupun who set a Sri Lankan record in 100 meters, last September, is currently dominating as the fastest athlete in South Asia, beating German champ-Denis Almas in the event. The previous 100 meter national record of 10.22 seconds which was set by Himasha Eashan, was shattered by former Pannala national school and St.Joseph Vaz college athlete’s sizzling 10.16 seconds.

Currently, Yupun is training in Italy with the dream of achieving his ultimate goal to participate in men’s 100 meters, in the upcoming Olympics. With a notable feat in Ancona, Abeykoon is now inching closer to the tough Olympic qualifying mark of 10.05 seconds (men’s 100m). It is quite unfortunate that a Sri Lankan 100 meters sprinter has not competed at an Olympics for a long time. However, Yupun’s promising form offers a glimpse of hope to end this long wait for a Sri Lankan athlete to feature in an Olympics sprint event. He has shown several times that he has the potential to reach for such heights. It is indeed a proud moment for us, as Sri Lankans to witness such energy in the track and field events from a young legend in making.