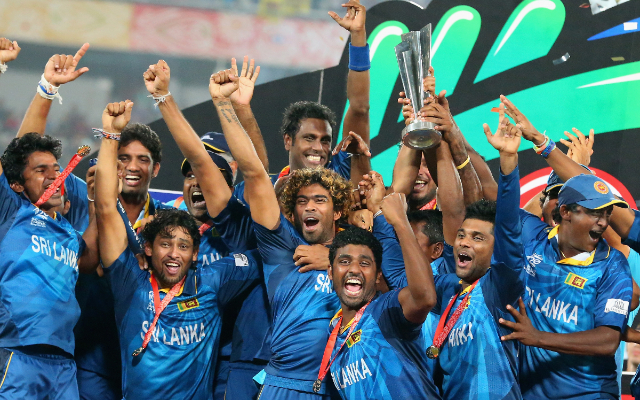 The fans, the players, the entire cricketing fraternity of Sri Lanka were fed up having witnessed their Men’s cricket team losing four straight world cup finals within just five years.&nbspThe very first one out of them, the 2007 ICC Cricket World Cup final in the Caribbean turned out to be a total nightmare for the Lankans against the much-fancied Aussies. The Australian outfit was one of best ODI teams in the recent past and Adam Gilchrist had saved the innings of his life for a swashbuckling 149 which he had controversially played with a squash ball inside his glove. Sri Lanka never really got going thereafter in this rain-curtailed encounter where nothing went right for them.

Two years later, even though they were not labeled as tournament favorites at the start, the Lankans had a promising campaign winning all six games leading up to the final of the 2009 ICC World T20. Enjoying his promotion to open the innings, Tillakaratne Dilshan had a tremendous tournament with the bat and was largely remembered for his Dilscoop Shot. However, in the all-important final at Lords, the Lankans once more failed to live up to the expectations going down fighting to the Pakistanis.

Fast forward two years to the 2011 ICC Cricket World Cup final which was a tussle between two evenly matched teams. Co-hosts Sri Lanka and India possessed some of the best-known cricketing names in their ranks. Batting first Sri Lanka managed to post a formidable target of 275 courtesy of a brilliant century by former skipper Mahela. At one stage India were struggling at 31-2 as Lasith Malinga sent Sehwag and Tendulkar back to the pavilion. Yet Sri Lanka’s sloppy fielding at crucial junctures let them down and it turned out to be the difference between the two sides. India, in the end, reached the target quite comfortably thanks to a couple of 90s by Gautam Gambhir and MS Dhoni.

A year later, in the 2012 ICC World T20 final,  it was against the men from the Caribbean. Even though the mighty West Indians had the much-needed firepower, in front of their home crowd the Lankans were clear favourites having already registered a crushing 9-wicket win over the same opponent in a Super-Eight stage game. In a blistering 55 ball 78, Marlon Samuels hit star bowler Malinga all over the park and single-handedly took his side to a respectable score. Chasing a modest target of 138, in front of a 30,000 plus home crowd, Sri Lanka once again cracked under pressure falling 36 runs short of the target.

Sri Lanka came into the 2014 ICC World T20 in Bangladesh having already spent nearly two months in Bangladesh which included a bilateral series victory against the hosts followed by an Asia Cup victory after six years. After all, it was a world cup. It was as if the rest of the world was playing for the right to play Sri Lanka in the final. It had been that kind of a story for Sri Lanka though finishing second eventually.

Sri Lanka got their campaign off to a dream start with a vital 5-run win against a star-studded South African team. The Dutch were no match for the Lankans who were in red hot form. Batting first the Netherlands were bundled out for 39 runs, then lowest ever total in Men’s T20Is handing Sri Lanka a 9-wicket victory. In their third group game, Sri Lanka managed to post 189 on the board against the Englishmen. But after England were reduced to 0-2, Alex Hales smashed a breathtaking 116 to pull off a 6-wicket victory for England. The final group match was effectively a quarterfinal for both teams. With just 119 runs to defend against the Kiwis, Lankans were pushed to the wall after a mediocre batting performance. The most successful team in ICC tournaments at the time was on the verge of elimination from the group stage. It was a time when a miracle was needed, be it Tests, ODIs or T20Is, all the Lankan captains turned to one bowler. It was the golden left arm of Rangana Herath. Cometh the hour, cometh the man. He had to do it and he did it in style. Herath who was omitted for the first three matches, ripped apart the Kiwi batting lineup and finished with sensational figures of 5 for 3. He was instrumental in scripting a dream comeback and the Kiwis who had no answer to Herath were finally all out for 60 runs. In the semifinal, West Indies were 80-4 in 13.5 overs chasing 161 when the rain started pouring in. Sri Lanka were way ahead by the Duckworth-Lewis method and won the match by 27 runs. Otherwise, it would have been an interesting affair considering the firepower of the Windies. Darren Sammy was quick to mention that even the almighty wanted the Lankans in the final so that the retiring star duo Mahela and Sanga could finish on a high in T20Is.

India had won all five of their games quite convincingly and were looking to capitalize on Sri Lanka’s track record of failure in world finals. Meanwhile halfway through, Sri Lanka captain Dinesh Chandimal was stripped from the post due to his poor form with the bat and was made to sit out from the playing eleven. They nearly escaped death against New Zealand and got to the final riding on the Duckworth-Lewis method. Yet, Sri Lanka was brimming with confidence. Something they seemed to lack in previous attempts. It was as if the entire nation was desperate to break the hoodoo. A crunch final was on the cards at Mirpur.

Lasith Malinga walked out to the middle as captain just for the third time in his career. Alongside him was MS Dhoni who had done it countless times for India. Malinga won the toss and decided to field first, denying India a chance to chase which they were so good at. India got off to a decent start and by the end of the 15th over they were sitting pretty on 95-2. Virat Kohli was on 55 and had created a solid platform for the business end of the innings. With a lot of batting left to come India were looking around the 160 mark which they knew was a decent score to put the Lankans on the back foot. Kohli straightaway showed intent hammering 14 runs off the first three balls of the 16th. Then followed one of the best displays of death bowling you would ever witness. Senanayake, Malinga, and Kulasekara were simply unplayable. It was a night to forget for Kohli, Yuvraj, and Dhoni who hardly managed to put their bat on the ball. India managed just 21 runs from the remaining 27 balls without a single boundary being scored and wobbled to 130 with the loss of 4 wickets.

In reply, when the fourth wicket fell at 78, Lankans were in a spot of bother for the first time in the match. In the middle was Kumar Sangakkara who was having a lackluster tournament and had scored just 19 runs off four innings. Sri Lanka made a gamble to send hard-hitting Thisara Perera ahead of the more reliable Angelo Mathews. Perhaps these are the risks champion sides take. The gamble paid off. Perera launched a cameo of 23 runs in just 14 balls which included three massive sixes.  The duo was guiding Sri Lanka towards an 18-year-old dream. Chasing a modest target of 131, Lankans still held back all the celebrations until they were over the line. There had been too many times where they were so close to the championship but yet so far at the end of the game. As Ravichandran Ashwin bowled the penultimate delivery of the 18th, Thisara Perera clubbed the winning runs back over Ashwins head sending millions of Sri Lankans into jubilation. A shot that resembled that of Arjuna’s in 1996. India the reigning ODI and Champions Trophy champions were denied a treble. Sangakkara stepped up when it mattered to remain unbeaten with 52 from 35 balls to collect the Man of the Match. No Sri Lankan was among either the top seven run-getters or wicket-takers in the tournament. With no standout performance, it was indeed a team effort with certain individuals stepping up when it was most required.

In 1996 it was a different story. A minnow nation reaching the pinnacle of world cricket. A win that electrified a nation. A win that revolutionized the course of cricket in the country. In 2014 it was T20 cricket. A world cup in a format that didn’t even exist ten years back. But this was a win for a new Sri Lanka. A win that united a nation. A fitting farewell for Mahela and Sangakkara. Above all a win for the many who had gathered in front of a television for the fifth time.