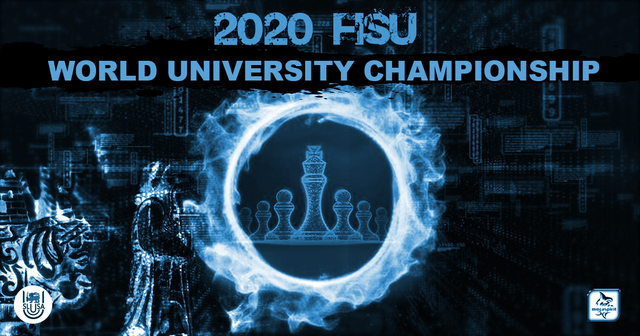 2020 has been a year like no other, especially in the world of sports. In a world where everyone has had to adapt to the new normal that is the world with Covid-19, chess has shifted from an over-the-board encounter to the internet. This was true in the case of the FISU World University Championship Mind Sports, originally scheduled for the 11th of September in Bydgoszcz, Poland, was initially postponed and later moved online with the new schedule on the 26th of October. The championship would consist of both chess and bridge, and each nation was eligible to have 5 teams in the chess competition.

The selection process was done via an online chess tournament organized by the Sri Lanka University Sports Association, won by Chatura Jayaweera from the University of Peradeniya with Chathulanka Gamage of the University of Moratuwa emerging as the runner-up.

I finished in 10th place, gaining entry into the second team that would represent Sri Lanka at the championship. The tournament would be one of an extremely high standard with 71 teams from 31 different nations taking part, with the presence of several grandmasters, international masters as well as other titled players. Sri Lanka not being a chess powerhouse was not expected to pull up many trees, but all of the participants were quietly confident we could bloody a few noses along the way.

The tournament was held on an online server (Tornelo), and to ensure that fair play was observed at all times all players were continuously monitored through Zoom, with the players having to have their video switched on at all times. The tournament would take place through an initial preliminary round through the first 3 days, before the first 16 teams would proceed to the knockout stage. With Sri Lanka’s strongest team starting as the 55th strongest team there were no lofty expectations, merely the pride and unique experience of representing the country on an international stage.

The tournament itself went fairly well for the Sri Lankan contingent with all the teams exceeding their initial expectations and upsetting several stronger teams by holding them to draws and even beating them on occasion.

Team 1, led by an extremely strong performance by Chathulanka Gamage who personally defeated a 2465-rated International Master, defeated a strong Argentina team and also saw victories against teams from Mexico, Honduras, and Colombia.

Team 2 was ably led by a good performance from captain Sajith Chaturanga, of the University of Colombo, held strong teams from Colombia, Kazakhstan, Costa Rica, and Spain to draws while also picking up victories against another Kazakh team and Kyrgyzstan.

Team 3 held teams from Costa Rica and Brazil to draws and the remaining two teams performed commendably as well. Unfortunately, none of the Sri Lankan teams were able to proceed to the knockouts and we bid farewell to the tournament.

The knockouts took place within the next 2 days, with the extremely strong Chinese team, which had also dominated the preliminary round, advancing to a final showdown against Ukraine. The Chinese Team, helped by a victory from Lei Tingje emerged victorious,  thus winning the first-ever online FISU Online World University Championship Mind Games in chess.

Speaking as a participant I feel extremely lucky to been given the opportunity to represent Sri Lanka at the international level for the very first time thanks to the SLUSA and it was a great experience playing against some formidable opposition.