From Volleying to Racing with Time, from Quickness to Strength… 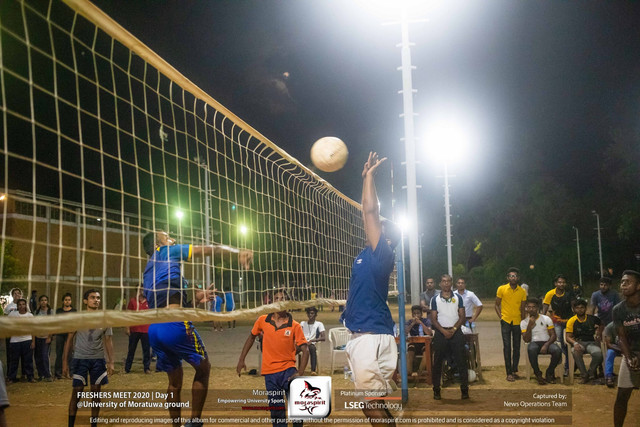 From Volleying to Racing with Time, from Quickness to Strength…

The time to build bonds and get to know each other began this week on the 10th of February. Newbies of the University of Moratuwa of the 2019 intake, all excitedly gathered around their fiesta of sports and games, Freshers’ Meet 2020. The tournament commenced with the national sport of Sri Lanka, volleyball. 15 male teams and the 6 female teams representing the 4 faculties of the University of Moratuwa, scattered practicing on their own, to muster a challenge for their opposing teams. The evening was filled with the hits and volleys of the balls and the constant back and forth passing of the ball over the net, mixed with the enthusiastic cheering and the musical entertainments of the ones beyond the margins of the court.

On the first day, the initial 15 male teams were narrowed down to four semi-finalists: IT3, Cool boys, E-fac Lions and Archi. The female teams came into the arena next. 6 teams of 6 players each were all focused up until the final mark decided the winner and through the battles on the arena, the team E-fac and IT1 came up as the finalists. In an exciting final in which both teams went head to head until 3rd and final round, team IT1 managed to secure the female championship beating the E-Fac team.

The male semi-finals that followed, ended with two engineering faculty teams facing each other in the final. From the two teams Cool Boys and E-fac Lions, Cool Boys boys managed to surpass the Lions’ strength and emerged victorious as the champions of the male volleyball matches.

While the volleyball court was filled with the crowd with their gazes fixed on the ball that gets tossed back and forth, inside the gymnasium, a smaller white ball started to follow the stride as the table tennis matches of the freshers’ meet commenced.

Two by two the players were all put up against each other until H. H. Disal Buddhima, M. H. Sandary Sudampriya, Sandupa Keshan and Maleesha Pabidu Amarasooriya managed to earn wins against the others and came up as the finalists. The cheers were booming as the female and male battles continued on a table under the hawk’s gaze of the umpires. And the day ended making Maleesha Pabidu Amarasooriya of the Engineering Faculty the champion of the series and&nbspSandupa Keshan of the Business Faculty the runner-up.

The third day of the freshers’ meet opened for the tap rugby and indoor rowing matches. The events for the day began with rugby matches. The 20 rugby teams trained by the Rugby team of Moratuwa managed to show their talents in the field through their energetic moves throughout the game. Dodging and passing till they get to the goals the 20 teams managed to get narrowed to three architecture faculty teams and one engineering faculty team in the semifinal. In the final match, Engineering faculty team Crusaders as the champions. However, the architecture faculty managed to secure the award for the best player of the evening.

As the day for the rugby teams ended the pavilion lighted up for the indoor rowing events. The matches used a simulator which the teams used to “row” in a 250m*4 relay. With the participation of 12 men’s teams and 5 women’s teams, the rowing relay took a very energetic air with the cheering of the crowds that were engrossed in the game along with the players.

The game of indoor rowing where the competitor was nowhere in sight but just a mark of time, ended leaving the Engineering Faculty as the male champions taking only 3 minutes and 26.2 seconds. Architecture Faculty won the female champions taking 4 minutes and 10.8 seconds. The Business Faculty secured the male second place with a margin of seconds, and IT faculty third place. The Engineering Faculty won the second place of the female relay. The Men’s best rower of the indoor rowing relay of the freshers’ meet 2020 was, Naveen Hettiarachchi completing in 46.1 seconds and the best female rower completing in 56.6 seconds was W. A. K. Nuwandi Sri Sulochana.

The events of the second and third days of the freshers’ meet 2020 concluded with showing the numerous talents of the newbies of the University of Moratuwa in various sports across the 4 faculties.