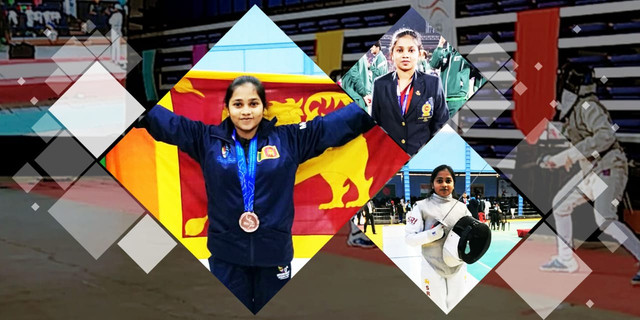 She is Harshani Wijewardhana who brought pride to our motherland by securing a bronze medal in fencing at 13th South Asian Games in 2019. Currently she is an undergraduate of the University of Colombo and following are her words which she shared with MoraSpirit.

Harshani, how were you introduced to fencing?

I used to play Judo in my school, but I was only lucky enough to play it only for about three years as our coach moved to another school. Right by the time that I had to quit Judo, somewhere in 2015, fencing was introduced in my school. Once I got to know about this new sport, which not many have ever heard about, I was ecstatic to do that. Then I got the opportunity to watch a fencing tournament which was more than enough for me to fall in love with this unique sport. So today here I am with great satisfaction about the choice I made back in that day.

What was the response from your family on the decision you made on doing this never heard sport?

I always love to do something quite uncommon. As I told you I was a Judo player. Not only fencing but also Judo is not that common within girls in Sri Lanka, but my parents always believed in those uncommon choices I made and gave enough and more support by doing everything they could do for me.

How challenging is it do a sport which is not known by the people in Sri Lanka?

It was not that challenging but I had to go through so much demotivation. I was told countless times that I had been wasting my time doing a useless sport and I would have no future in fencing.

Being honest I do not believe that fencing being an unfamiliar term in the Sri Lankan sports arena was not actually a challenge that I faced. It was an opportunity for me and I made the use of it.

How was the response from your friends in your university after getting to know you as a fencing player?

Literally most of the students in my university even heard about this sport only when I won a medal for my country. Unless I went to the academic unit to discuss my 80% attendance issue since I could hardly attend lectures due to fencing practices for SAG, anyone in my university would never know that I was representing Sri Lanka in SAG in 2019. I had to explain it to everyone fencing as a martial art with sword fighting. Have you ever thought of representing Sri Lanka when you started learning this sport?

Not initially but later I wanted to represent my country in SAG, and now I am dreaming of reaching more heights in my journey. I would be really delighted if I can make it for the Olympics in one fine day.

Even without having fencing as a sport in university, what makes you continue this sport?

Fencing is my hobby. Sports are not my first priorities. First comes my academics. Fencing enhances my focus, my mental stability which helps me a lot in academics. I am not doing this sport for a medal but of course for something beyond that. I don't know how to name it, but if I name it as a feeling that warms me all the time, I hope I have done a little bit of justice for that something.

Besides that whatever the sport you do, there are a lot more things that you learn and get through that particular sport which can never be achieved only through academics.

How hard was the way you have come this far?

Genuinely I have nothing to say to you here other than the most common secret of success. You might find that I am quoting other successful people in the world, and thinking back, I have learnt that they are quite true.

Luck only gives us something but not everything. I realized my commitment, my hard work, my determination and blessings from my lovers are the facts that led me to a SAG medal. Everything has its own cost. You have to pay it regardless of the price as long as you need the product. My journey itself takes immense amounts of hard work and commitment.

With this academic workload in university, how did you make time for fencing?

Keeping the balance between academics and sports is not that easy. Having missed most of the lectures, it was not an easy battle I had to do to understand the subject matters.

In the University I had mid semester exams, end semester exams, quizzes, and assignments which are common to every university student along with fencing practices in Panadura. As I was provided accommodation in Panadura, every single day after the morning practice session I travelled from Panadura to Colombo to attend the lectures and again in the evening I rushed to Panadura for evening practice session. While having to cope up with such a tight schedule, I always find time to study at least an hour per day. That commitment led me here.

Have you ever thought of giving up what you do because of this battle you had with time?

Time management was utterly challenging but still achievable just because I kept working for my dreams continuously.

It was neither once nor twice that I had to work in nail biting environments. Sometimes I was almost at the very end of giving up. I always convinced myself that I needed to finish the task I started. Here I must thank my coaches, my teammates in the national pool who helped me a lot to face these obstacles. They always persuaded me that bravery to explore my hidden potentials will make nothing impossible to me. I am grateful to them for that.

Do think girls are bit reluctant to do a sport in university level?

Of course yes. It is really sad to see that girls have not identified the huge chance they get in the field of sports as there are only very few female players. But if you are determined and keep on practicing there are so many opportunities waiting for you out there.

As you think, what’s the reason behind that reluctance?

Most of the people generally think that sports are only done outside which is not true at all. Every sport doesn’t make your skin darker and I must say, even if it does, that is totally insignificant compared to the benefits which players are privileged with.

Other than that, lack of awareness about the advantages gained from a sport can also be a reason for that reluctance.

Is it worth it for someone who is totally new to sports to start doing a sport even with this heavy academic stress?

My answer would be a big yes. As undergraduates most of us are not that much exposed to the industries which we hope to enter yet. One day we have to work under very tight schedules and have to bear a lot of responsibilities. Besides that we need a lot more skills to be developed in ourselves even to find a good job in the present competitive job market.

Literally sports do address most of those issues. Simply sports polish your character and personality.

What do you have to say to a newcomer to a sport at university level?

You are not late at all. Being honest, I haven’t played this sport for a long time. I didn't practise this sport from my childhood. I started playing this sport in 2015 and I was able to make my motherland proud with a SAG medal with only a practice of 4 years.

If you aim for a medal, then as you are new to the sport, you need to practice more to play as well as the others who have done the sport already for a long time. Experience is the only difference and it can be tackled.

14. As you think what are the areas where a change is needed in university sports

In most of the universities there are no coaches for most of the sports. Most of the students who engage in that particular have done so in their school days. They themselves do practice. So a newcomer always finds it difficult to learn the sport properly.

Apart from that most of the sports require playing equipment. There are many students who live from Mahapola. Buying new sports equipment is a massive burden for them. So that reason has a great potential to create a huge distance from sport.

If these issues are properly addressed both of us will be lucky enough to experience miracles in the university sports arena in the very future.

What is your message to female university students who are willing to do a sport?

When Christiano Ronaldo was 15 years old he told his teammates that he would be the best soccer player in the world someday, where all his teammates laughed at him. So there is nothing to worry if others do not get your dream and they find it really awkward. Just work on yourself. No words are needed to convince them once your dreams come true. Never doubt your capabilities. All that matters is how thirsty you are to create your own legend.

Thank you Harshani for sharing these encouraging words with Moraspirit and we wish you all the very best to create a legendary name in Sri Lankan sports arena.