How the ‘Golden Boys’ of Ruhuna conquered the Southern waters 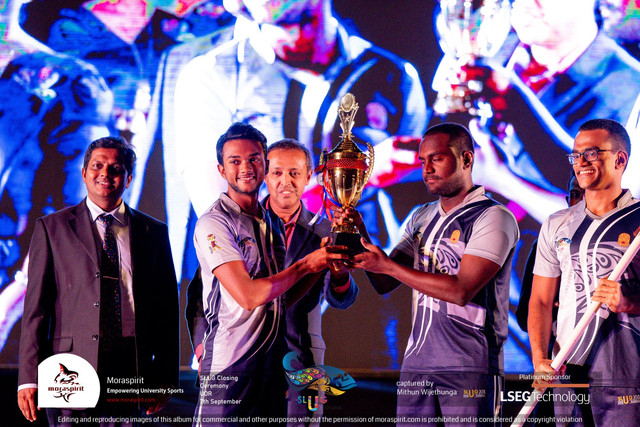 How the ‘Golden Boys’ of Ruhuna conquered the Southern waters

“We hardly trained together!”

“Training altogether was a big hassle for us!”

These were some statements expressed by a couple of swimmers of the legendary Swimming team of the University of Ruhuna which won the men’s swimming championship in the 13th Sri Lanka University Games (SLUG) which was hosted by the University of Ruhuna themselves last year (2019). The staggering number of 8 SLUG Swimming Records by this team speaks volumes about how big their achievement is. However, the 11 Gold Medals and the Silver Medal they wore in the victory podium simply cannot show the sweat and toil they put when no lens was focusing them. This is a look back at how several guys from different faculties located in different locations teamed up and achieved something their University could only have dreamt of just a couple of years ago.

If anyone didn’t know the fact that University of Ruhuna won the men’s swimming championship in last year’s SLUG, these records might help you.

“I first represented University of Ruhuna in swimming in the 2017 Inter-University Swimming Championship. Apart from me, no one else was able to at least finish among the top 5. A women’s swimming team representing our university didn’t even exist!” said Kalana Weeramuni, the man who lead the men’s swimming team in 2019 and is currently studying in his final year in the Faculty of Fisheries and Marine Sciences & Technology. The story in Ruhuna now is, of course, different – they have swimmers from both genders.

Despite the backing given by the University, the swimmers faced some obvious challenges. The unavailability of a Swimming Pool at any of the 9 faculties under the University takes the top spot in the list. Swimmers from the faculties in the Wellamadama premises in Matara have to travel for almost 1 hour to the pool in which they train, “We travel to Kamburugamuwa once a week to train 1 hour in the Kotawila Swimming Pool” said Kalana. Just as it sounds, the time spent on training is simply not enough. Another concern raised by Kalana was, “University is not the place to learn swimming from the beginning, but to make people who could swim win competitions, training is a must!” which makes his team’s victory even more special. And also don’t forget that all these swimmers are students and have to bear the burden every student usually does.

So how did the swimming team of Ruhuna improve from 1 medal to 12 medals, including 8 records, within just 2 years?

The ‘Golden Boys’, as we call this team, began to form in 2018. Kalana’s deputy Daishika Dias, who is currently a 3rd year student of the Faculty of Management & Finance, joined the team in 2018. Just like Kalana from Royal Central College Polonnaruwa, Daishika is also a well-seasoned swimmer with a lot of experience in the school level from Royal College Colombo. Daishika’s addition gave the team a great boost.

The following year was a dream year for Ruhuna swimming. Three swimmers from the University of Ruhuna including Kalana were picked to represent the contingent of swimmers from Sri Lanka to the 30th Summer Universiade (World University Games) in Napoli, Italy. The other two swimmers who headed to Italy along with Kalana made up the core of the Ruhuna swimming team which would go on to create history later in the same year. Mevan Induruwa and Amila Fernando, two Medical students who currently study in their 2nd year, became the two billion-dollar inclusions for the Ruhuna swimming team as they went on to form an unbeatable relay team along with Kalana and Daishika. Both Mevan and Amila were well-renowned swimmers during their school days for S. Thomas’ College Mt. Lavinia and St. Joseph Vaz College Wennappuwa.

“With minimum training opportunities and a packed academic schedule, you always can’t expect to win with a set of amateurs. So the inclusion of swimmers like Mevan and Amila was priceless for us”, said Kalana in a joyous tone. Even with some top-class swimmers, the Ruhuna men’s swimming team managed only a 2-point lead over the team which finished 2nd, the men’s swimming team of University of Sri Jayawardenepura.

“J’pura was a tough challenge. Even though we had more national representatives, they had more swimmers who could earn them points. They were the team to beat!” said Kalana with a lot of pride about the fact that they eventually managed to win. One other privilege the swimmers from Sri Jayawardnepura have is a swimming pool of their own which allows them to train regularly. With all these obstacles, the hosts still managed to beat the favourites in the Kotawila Swimming Pool in the all-important SLUG competition. And, this is where the brilliant tactical approach of the ‘Golden Boys’ comes to the equation.

The goal was clear, it was to win the overall championship. So Kalana took up the short distance races, Mevan looked after the long-distance ones and Amila took on all the back-stroke races. The trio won 9 Gold medals with an equal share among them including 6 records. Mevan ended all his races with records while Amila and Kalana finished with 2 and 1 respectively. The relay team these three formed together with Daishika was just too good as they won both relays with records. But were the points accumulated by these wins enough for them to clinch the championship?

By looking at the points table and the medals table, also keeping in mind the fact that the top 5 of every race receive points, anyone could say that ‘If not for the Silver medal won by Isura Wickramanayake, Ruhuna wouldn’t have been able to defeat J’Pura’. Even though it’s just an opinion it cannot be ignored either. Isura’s contribution has been so vital for Ruhuna’s victory and the credit for that should be completely given to him.

“We, the swimmers based in faculties located in Galle trained at the Mahinda College swimming pool which is not very far from the Medical Faculty (Karapitiya, Galle). We got to do more training sessions than the guys in Matara”, said Mevan who was responsible for coordinating the training sessions in Galle. Isura, who is the current captain of the Ruhuna swimming team and a 3rd year student of the Faculty of Engineering (Hapugala, Galle) had to make a tedious commute to the Mahinda College Swimming pool all by himself as the only representative of the University Swimming team from his faculty. He wasn’t as experienced as the names mentioned above, and he only had competed in inter-school swimming competitions for Bandaranayake College Gampaha until he took a break from swimming for his OLs and ALs. “Isura ayya trained so hard! His Silver medal is as important as a Gold medal for us. That is just a fitting reward for all his hard work” said a very impressed Mevan.

Apart from swimming, Isura is also a part of the University Hockey team. “It’s not easy to do two sports along with your studies. But I’m really happy and proud that I managed to do it successfully” said Isura in a very down to earth tone. He also said, “We are confident of the swimmers we have for this year too” reflecting how confident the captain is about his team.

With the reins of leadership now handed over from Kalana to Isura, the team is eagerly waiting to give their legendary leader Kalana a grand send-off by repeating their success in the Inter-University Swimming championship this year. However, with the prevailing situation of the country, the competition is still a doubt.

Kalana, Mevan, Amila, Isura and Daishika are all swimming role models for the students at University of Ruhuna – there’s no doubt about that. Despite being reputed swimmers of their own, the commitment and hard work they put in to lift Ruhuna Swimming to where it is now, is a commendable act. They spent all their time training hard in their home towns, in the pools of the clubs they used to train as kids, the week or so before SLUG began – and that’s the passion in them for the sport. This is why ordinary sportsmen and great sportsmen are looked in different ways. The ‘Golden Boys’ of Ruhuna are great sportsmen.