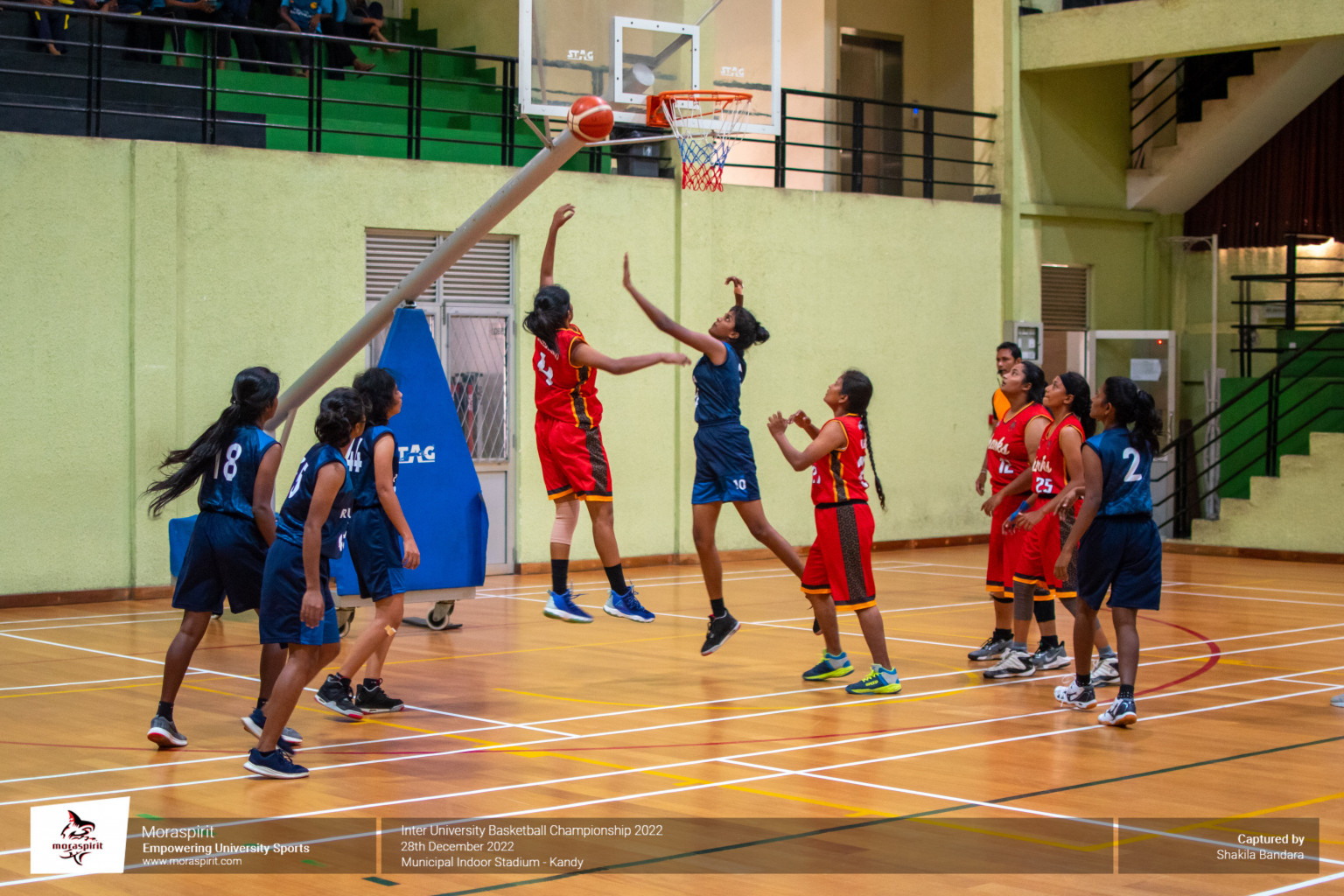 Both Women’s and Men’s categories were conducted in 4 groups which included 3 teams each with the exception of Men’s group D with 4 teams.

University of Moratuwa eased past Rajarata University and University of Ruhuna to lead Group C and Ruhuna’s win over Rajarata got them qualified for the quarters as well.

Without a doubt the most exciting Women’s group stage matches panned out in group B where the Colombo, Sabra and Eastern ladies went toe to toe with each other to reach the quarters and the chants of the crowd were at its peak. Sabra side proved too strong of a team and managed to pass on as the leaders of the group where the Colombo side followed through.

In group D University of Jaffna eased their way through to the lead while the hosts University of Peradeniya followed them with their win over Wayamba University.

Moving along to the men’s matches, it was the hosts who opened up the day with a huge win of 83 : 36 over Rajarata University where they followed it up with wins over Ruhuna and Eastern to top group D. University of Ruhuna followed them in the second spot.

In group A the South Eastern University was overrun by the Japura and Jaffna sides. Japura side came on top of the group with a 67 : 46 over Jaffna to lead group A.

In group C it was the Sabra and Kelaiya sides who moved themselves up to the quarters with Sabra in the lead. The Sabra vs Kelaniya match was particularly thrilling with only 5 points separating the two teams at the end of four quarters.

With that everything was set for the quarterfinals, with the winner of each group facing the runner-up of the following group.

The battle towards victory continued on the evening of 28th with the quarter-finals. In the Kandy Municipal Council Indoor Stadium, the fight was on, between the ladies. University of Kelaniya were the first ones to mark their place in the semis with their 30 : 17 victory over University Ruhuna. Sabaragamuwa University made it rather comfortable in their match against the hosts, easing themselves to the semis with a score of 45 : 17. The highlights from the women’s quarters were the matches between Japura vs Pera and Jaffna vs Colombo. The former being a close one with 48 : 39, just 9 points separating the two teams. Colombo’s strong fight was not enough to keep the charging Jaffna players at bay, losing out to 58 : 40.

In the Men’s quarters Japura and Kelaniya sides were the first to meet and it was an exhilarating match to witness. The Kelaniya side was able to come on top with a score of 51 : 42. Sabaragamuwa University followed them to the semis with their win over Jaffna. University of Moratuwa and the hosts, University of Peradeniya eased themselves past Ruhuna and Colombo side to mark their spots in the semi-finals.

The sun broke through the sky in the morning of 29th at Peradeniya and it was time to witness the epic conclusion of the basketball campaign of the Inter University Games. The University of Peradeniya Gymnasium was roaring with the cheers of the fans and it was time for the energetic undergraduates to display their talents.

With the women’s final all set, the men’s semis went underway. Both of the matches were won with a bare margin and none of the teams showed any sign of giving up. University of Kelaniya were the first ones to make it through to the final over the hosts, just 3 points separating the two (73 : 70), they were followed by University of Moratuwa, just 5 points making the difference for them against Sabaragamuwa University (79 : 72).

With the group stage, quarters and semis done and dusted, the stage was set to distinguish the best of the best in the University Basketball Arena. The stands of the Pera Gymnasium was full with energetic fans who engage themselves to the maximum to cheer their teams,

With their victories, University of Moratuwa and Sabaragamuwa University were able to close in on the leading pair in the points table but still Japura stands at the top with COlombo following. With just a handful of games to carry out, it’s all up for grabs in the Inter University Games. Stay tuned with MoraSpirit for the instant updates and game follow ups.