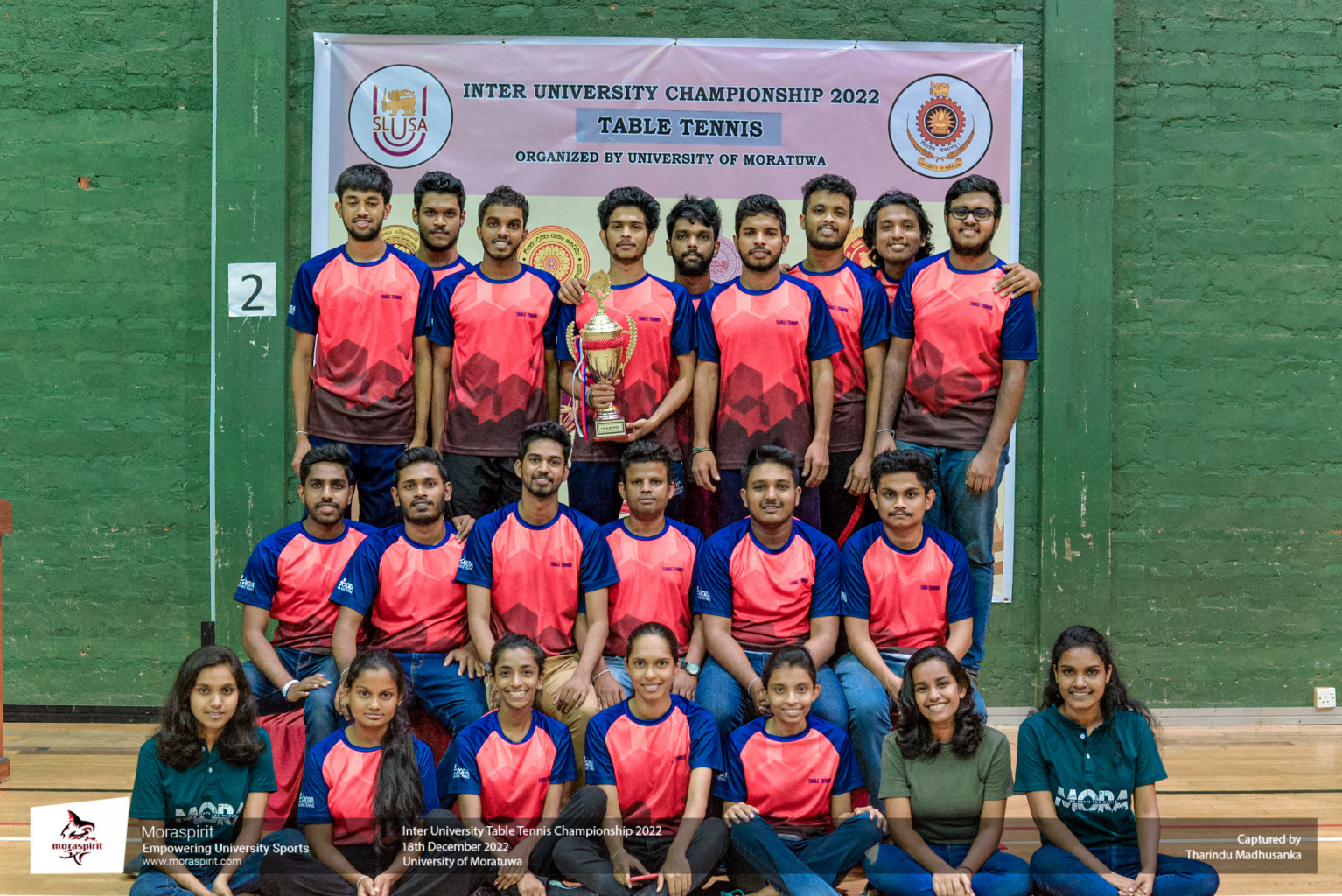 The exciting table tennis “TT” tournament of the Inter-University Games 2022, started at the University of Moratuwa on 17th December 2022. 14 Universities from all over Sri Lanka, from Universities with Long histories such as Peradeniya, Moratuwa, and Colombo, to the recently established University of Vavuniya, all the teams entered to prove their power and talent, competing up to their fullest.

These 14 teams were divided into 4 groups, with the group champ and the runner-up, getting the privilege to compete in the semifinals.

On day 1, the Indoor stadium was set up, with 3 men’s and 3 women’s matches being held parallelly, being reduced to 2 women’s and 2 men’s matches on the second day, while the other teammates cheered and motivated their team players in action. Each match consisted of 3 singles and 2 doubles, within each match consisting of 5 rounds, made the event as a whole, more exciting and breath-taking. From dawn till dusk, there was a cheerful environment of sportsmanship, friendship, talent, and much more.

All the teams were grouped as follows,

The first day started with University of Jaffna and Wayamba University, gaining a straight 3-0s against their opponents - Eastern University and University of Vavuniya respectively. Then followed by other matches, where all the players showed their enormous talent and willpower to prove that, they are no lesser, compared to their opponents!

There were situations where some teams were to play hard till the end to prove their victory like University of Rajarata against South eastern University of Sri Lanka, which, started with a loss, and ended with victory in the last doubles round. On the other hand, University of Jaffna was easily knocking down all its opponents with a straight 3-0, thus capturing the group champion posts easily!

After hectic hours of struggle, the following 8 teams made their way to the quarter-finals.

Then came the semifinals, where matches were held parallelly between Mora vs Pera and Sabra vs Colombo. With cheers and motivational shouts from all over the indoor stadium, both University of Moratuwa and Sabragamuwa University, achieved victories in the score of 3-0 and 3-1 respectively, thereby leading themselves to the finals!

Now comes the real moment of happiness! University of Moratuwa, being the host, amidst all the cheers, gained the champion title of Men’s table tennis of the year 2022! On the other hand, bowing itself to the host, Sabragamuwa University emerged as second in men’s table tennis!

All the teams were divided as follows,

All the matches were in action parallel to the men’s matches. To be in fact, the women’s matches were so exciting and tense compared to men’s because all the players were showing their utmost strength to their opponents till the very end. The only team to score straight 3-0s with all their opponents was University of Kelaniya, while all the other teams had to compete in at least one doubles match!

Throughout the battle, proving their victory, these 8 teams qualified for the quarterfinals.

In contrast to the men’s quarterfinals, University of Sri Jayewardenapura and University of Ruhuna, struggled so much with their opponents in proving victory, being resorted to playing one doubles. Worse than that, teams of Universities of Peradeniya and Colombo, as their opponents also proved no lesser to them, showed their ultimate power in 2nd and last women’s double matches, in order to snatch the opportunity to play in the semifinals.

Then came the semifinals, which took place between Ruhuna vs Pera and Colombo vs J’pura. Colombo found it easy to beat its opponent in straight 3-0s, but Ruhuna had to again struggle one more time in one doubles to prove their victory.

Then came the final breath-taking match between Ruhuna and Colombo, where Ruhuna could not show the same power it showed in all of its previous matches, thereby sacrificing the title of champion of Women’s Table tennis of Inter-University Games 2022, with the score of 3-0. On the other hand, University of Peradeniya, for the last time, strived hard to secure the third place, by winning against University of Sri Jayewardenapura in the consolation finals.