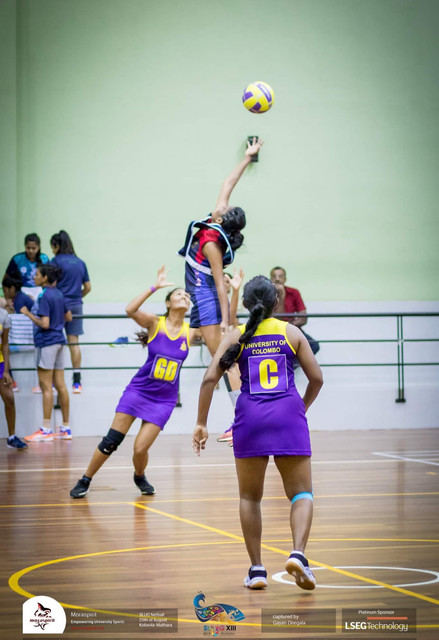 Yesterday was the final and the most tempting date of the SLUG XII 2019 Netball tournament. Hence, it was the day that Netball champions were decided.

It’s undoubted that SLUG is the inter-university competition that every player anticipated to participate during their university lifetime. With the intention of bringing the trophy to their home, each player practices harder throughout any time period. Throughout the day, this fact was being proven by the extraordinary skills of the netball players.

The first match of the day was initiated between the University of Colombo and the University of Moratuwa. It was definitely a tough match as expected and even the audience could not decide who would win until the last minute. However, due to some simple mistakes by Team Mora led Colombo to get the opportunity to defeat them for a close score of 30-29 and the Colombo were the first finalists to walk through to the finals.

The second match of the semifinals was held between University of Jaffna and University of Sri Jayewardenepura. Having won the previous two championships, Japura was expected to bag the championship this year by many. However, in the end Jaffna were able to defeat the mighty Japura team. This match also got the quite repeat telecast of the previous match and Jaffna won the match for a score of 25-24.

Thereafter, the consolation final match was held in between University of Jayewardenepura and Moratuwa. Even though Moratuwa led the first quarter, later Japura was able to showcase their skills and attacked the opponents to leave the score at 47-27. Likewise, Japura reserved their place as the 2nd Runners up in SLUG XII 2019 Netball tournament.

Afterwards, the most expected and adrenaline-inducing match was begun. It was between the two finalists, Jaffna and Colombo. In every game no body cannot predict who will be the winners until the last second. This was what happened here also. At the finishing time, the match was tied. Then according to the rules and regulations teams were given extra 7 minutes to play without any interval. Here, Jaffna was able to conquer Colombo.

Jaffna participated for this event with lots of confidence and energy. We were able to witness this fact throughout the tournament. Their confidence and skills were able to overcome the threat of Colombo and be crowned as the champions of SLUG XII 2019 Netball tournament by defeating Colombo for a score of 46-42. Therefore, Colombo were able to emerge for the of place first runners up.

To be concluded, MoraSpirit convey our heartiest congratulations to all the participants of SLUG XII 2019 Netball tournament.