J’Pura emerges as the champions of SLUG XIII Wrestling battle 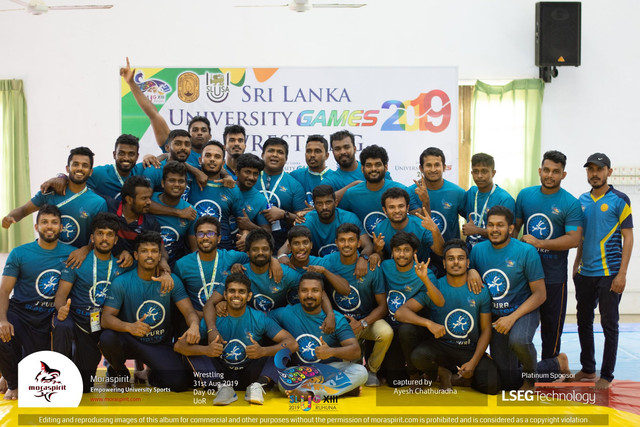 J’Pura emerges as the champions of SLUG XIII Wrestling battle

G. G. Kavindu, from University of Kelaniya, won the gold medal in 57kg weight class while D. P. J. Y. Madhushanka from PER, J. A. P. M. Jayanayake from MOR and I. G. U. S. Jayarathne from WAY won the rest of the places respectively.

B. M. D. C. Gunarathne, from University of Sabaragamuwa, won the gold medal in 65kg weight class while M. G. T. N. A. Bandara from COL, A. U. U. Sandakalum from EST and K. Jothees from PER became first runner-up and second runners-up respectively.

Under 70kg weight class, University of Sabaragamuwa player, D. M. H. N. B. Dissanayake was crowned as the gold medalist. K. H. A. Nishantha of KEL won the silver medal while P. Jeyatharsan from EST and H. P. K. D. Thilakarathne from SJP shared the 3rd place in the same category.

As the final weight class of the lightweight category, 74kg weight class matches were conducted and 11 players came to the battleground. From them, K. R. M. I. L. Rathnayake of SJP was lucky enough to clinch the gold medal while S. Ajithraj of EST, K. S. N. Rathnasooriya of PER and S. K. Athulgama of SAB became runner -up and second runners-up respectively in the category.

Under 86kg weight class, University of Moratuwa player, Ravindu Vasuka was crowned as the gold medalist. A. M. V. A. P. Herath won the silver medal while K. Dishanth from EST and P. K. Sandaru from WAY shared the 3rd place.

S. A. N. S. Jayashanka, from University of Wayamba, won the gold medal in 92kg weight class while P. A. K. G. Pitumpe from SAB, A. G. C. Gunawardena from COL and R. M. C. S. Bandara from PER won the rest of the places respectively.

After a pack of exciting matches under 10 weight classes, the overall championship was presented to the team with the highest marks from the series. 5 points were allocated to a gold medal and 2nd place was awarded 3 points while 2nd runner-up of a weight category and other wrestlers in the category got 0.5 marks.

Most of the events in SLUG XIII are finished by now and the coming week will be much more heated as the glorious sports festival is slowly approaching to its end. We, MoraSpirit, invite you all to join with us to witness the beauty and glory of the final days of SLUG XIII.