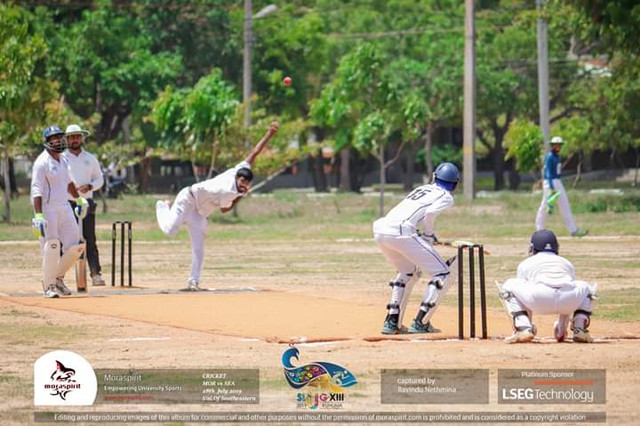 The pains and ponders that were collected during the last six weeks gave the courage. Jaffna team who were crowned as the unbeaten team faced Japura after fifteen years in SLUG Cricket finals 2019 at University of Rajarata Grounds.

University of Jayewardenepura, led by captain Madhava Fernando won the toss and elected to bat first. The batting line up was led by Kasun Abeyrathna and Deshan Fernando. S.Jananthan of Jaffna was able to wrap up Japura open partnership in to 13 runs. Then the Kanishka Uggalpaya, one down batsman played an excellent innings of 91 runs in 106 balls. His inning was highlighted with 04 sixes and 06 fours. Kanishka Uggalpaya and Damitha Panditharathane scored 109 runs partnership for the third wicket. Madhava Fernando, the captain scored 33 runs in his innings. Gihan Danushka and Ishita Wijesinghe gave handy contribution of 38 and 45 runs respectively to Japura. Jananthan Lonathieswar and Bandara picked two wickets each. At the end of 50 overs Japura scored 289 runs with the loss of all the wickets.

J Kalkhogan and N Dhanushan of Jaffna started their innings. Isitha Wijesinghe wrapped up the Jaffna open partnership within 14 runs. T Senthooran started his proceedings with the highest double-digit score of 74 runs in 72 balls. R A D M Bandara scored 38 runs in 20 balls. No one was able to play attacking brand of cricket after the 6 th wicket. Sajith de Silva picked up two wickets for 33 runs.. With the help powerful bowling spells from Japura bowlers, Jaffna ended their innings with 244 runs in 43 overs. At the end of the day Japura sealed a spectacular win with 45 runs and became SLUG cricket champions.

We at Moraspirit extend our heartiest congratulations for the Japura team for their heroic victory and the runners up Jaffna team. Stay tuned with Moraspirit for more updates.