Jpura grabbed the dual championship crown in the battle of shuttlers 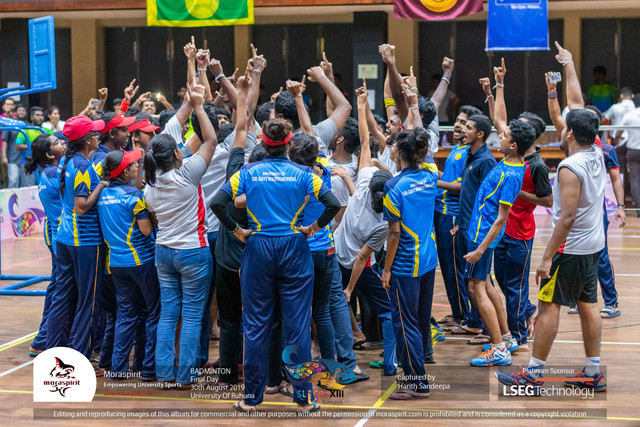 Jpura grabbed the dual championship crown in the battle of shuttlers

Festival of shuttlers in the arena of SLUG XIII has come to an end after a series of exciting matches which were held at University of Ruhuna, Gymnasium for 3 days from 28th of August to 30th of August.There were 14 teams under 4 main groups in each category. After 18 preliminary round matches, top two teams from each group were got selected for the quarter finals and winners of this round were lucky enough to be in the semifinals.

University of Sri Jayawardenepura had a great positive mind set due to their former performances but Colombo gave their maximum effort to take the crown with them when they go back to home. University of Sri Jayawardenepura made University of Colombo team to breakup their dreams of the crown and finished the match even without letting them win a single round. At the end, MoraSpirit got chance to share thoughts with the winning team captains about their Victories and winning moments.

Vinod Navinka Payagala, team captain of Sri Jayawardenepura men’s team, said that he has played for two SLUGs by then and that was his last year in the university. He was very excited by the victory and mentioned this winning as his first SLUG championship and second time in university games. He expressed his thankfulness over both men and women teams, their coaches, managers and everyone who supported the team throughout the journey.Team captain of women team of Sri Jayawardenepura who became the champions for 4th consecutive time , Kavidi Sirimannage, shared her ideas with us and expressed her happiness towards winning of both teams of the as her 4th time victory in Inter University Games and 2nd time in SLUG with this team. She appreciated her team and expressed her gratitude to madam in charge, coaches and all other supporters.

Awarding ceremony was held in the evening with the presence of the chief guests and the team members. Though the event was ended after this, it was truly a new beginning of another story that leads losers to become new champions or champions to secure their reign throughout upcoming sports year.

Stay touch with MoraSpirit and get the latest news and updates on upcoming exciting stories that are going to heat up the SLUG battle ground and the following sports events in university sports arena.