Jpura outstands with a remarkable Victory in SLUG 2019 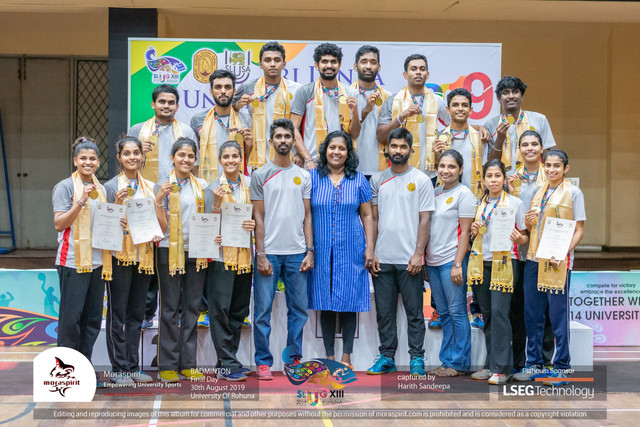 Jpura outstands with a remarkable Victory in SLUG 2019

14 universities were fought for the crown of Badminton Championship at the Sri Lanka University Games 2019.&nbspCollectively 54 matches were held for entire three days as 26 matches from men category and 26 matches from women category respectively.&nbsp28th which was the first day and most of the preliminary rounds were covered. Initially among many preliminary rounds University of Peradeniya (PER) vs University of Visual performing Arts were able to score 3 to 0 points by PER.&nbspUniversity of Colombo (COL) vs University of Jaffna (JAF) round was able to win by COL using 3 scores against JAF. &nbspUniversity of Rajarata (RAJ) Vs University Sabaragamuwa was able to win by RAJ using 2 scores.&nbspUniversity of Sri Jayawardhenapura Vs Uva Wellassa University round won using 3 scores by ‘J’pura’. &nbspThe first day of the SLUG 2019 badminton tournament was reached to its edge in this manner.&nbspThe players were exhausted, and racquets were remained to reinvigorate for the next day.

&nbspThe second day of the tournament was commenced with completing the rest of the preliminary rounds.&nbspAfter completion of 18 preliminary rounds from each men and women category quarter final rounds were started.&nbspUniversity of Kelaniya (KEL), University of Peradeniya, University of Sri Jayawardenapura (SJP) and South Eastern University (SEA) were selected as quarter finals under men category.&nbspFirst quarter final event was held between KEL and PER.&nbspInitially the first three single rounds were held, and all three rounds were captivated by ‘Pera’.&nbspNext quarter final rounds were between ‘J’pura’ and SEA.&nbspAmong those Japura who exhibited their promising talents throughout the battlefield was able to easily grab the quarter final crown using two single events and another double event.&nbspMeanwhile in women category University of Wayaba (WAY), JAF, PER and SJP were qualified for quarter final rounds.&nbspAmong the quarter final rounds PER Vs SJP and WAY Vs JAF were the competitors. &nbspAmidst thousands of cheering and screenings of J’pura fans SJP team established the victory easily by showcasing their dominance using only first three single rounds which was played by Thilini Hendahewa, Lakini shashibani and Thisuri Fernando of SJP.&nbspRemaining quarter final was achieved by team WAY, Y. B. Herath, J. K. N. N. Perera, H.V. Y. Wathsala and A.H.M.M.M. Abeyrathne.&nbspIt was the termination of the second day of a paramount journey towards a single crown.

The final day of claiming victory was dawned ultimately while increasing the pulse of the players and spectators.&nbspFlags were dancing at the balcony amidst the roaring cheers of the fans who were there to scream on behalf of Alma mater.&nbspGoing through a busy tight schedule, shutters for the semifinals were announced for the final day.&nbspThe first semifinal between PER vs MOR was won by ‘Mora’ while the remaining was won by SJP with 12-21 points after a fierce battle with University of Rajarata team in men category. MOR team win by 13-21 points.&nbspMeanwhile in women category SJP claimed the victory by 19-21 against University of Kelaniya.&nbspThe remaining semifinal was captivated by the team H.M.J.C. Dhanasinghe, T.P. Vitharana, D.T.S.T. Senevirathne and S.U.M. Fernando of COL against WAY team excluding one double match.&nbspNext the consolation finals were held between PER vs RAJ under men category and KEL vs WAY under women category.&nbspThere RAJ and KEL was succeeded.

After a huge effort of an immense crowd the pinnacle of the journey towards victory arrived at the evening of final day.&nbspNames of semifinal winners in men category were echoed throughout the gymnasium of University of Ruhuna.&nbspFinal battle between ‘Mora’ and ‘Japura’ was became extremely tough game.Among the&nbspsingle rounds which were arranged between Malith Thennakoon, Mahen Samaranayake, Pavith Sullochana of team SJP and M.A.T. Thushara, J.M.T.N.Thevin, A.S.H. De Silva of team MOR , Mora teamwas able to grab the victory in two single rounds while Jpura secured the victory in one single round.The ultimate victory was claimed through the last match of the last double.After ther fierce battle ,Jpura was able to secure the chamipionship by 21-19 points.This is the most thrilling moment in the tournament,where the best were seleted among the best.&nbspWomen championship also easily conquered by the University of Sri Jayawardenapura from the COL team.&nbspUniversity of Sri Jayawardhenapura team was overwhelmed by the overall Badminton Championship at Sri Lanka University Games 2019.The winning&nbspSJP captain Kavidi Sirimanna shared her feelings on contentment of this triumph. “This is our consecutive fourth time of being championships. And my second time at SLUG experience. It is happy to say that we achieved the badminton championship consecutively for two times at SLUG with this team.&nbspI am happy with my team and thank for the madams who was directing us”

This date will definitely be added as a remarkable day in the history of University of Sri Jayawardhenapura. We at the MoraSpirit, add heartfelt congratulations for their greatest achievement. Stay tuned with MoraSpirit for more latest news and updates on upcoming exciting events that are going occur in the SLUG battle field.