Moratuwa and Colombo emerged Champions at The Spell 2019 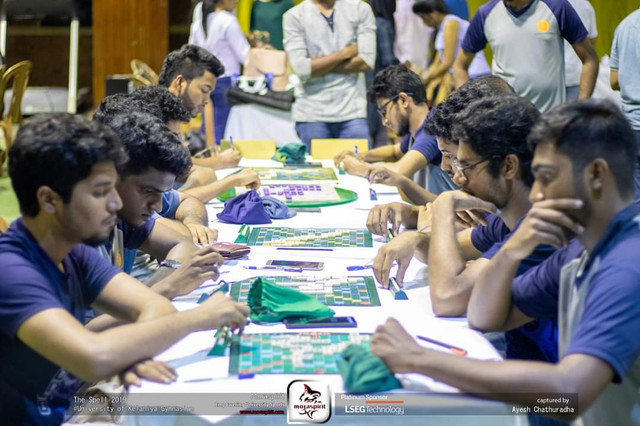 Moratuwa and Colombo emerged Champions at The Spell 2019

The Invitational University Scrabble Championship, “THE SPELL 2019” organized by the Department of Physical Education of University of Kelaniya annually since 2015, was held at the Kelaniya University Gymnasium on 9th of November 2019 with the presence of four universities University of Kelaniya, Colombo, Sri Jayewardenepura and Moratuwa scrabble teams in both men’s and women’s categories.

The Opening ceremony was done according to the tradition and the Chief Guest for the occasion was Sr. Prof. S. R. D. Kalingamudali Chairman of the Sports Advisory Board of University of Kelaniya.

There were 6 rounds in total for the tournament including finals and consolation finals. First-round was conducted using a random draw with the participation of 8 teams from women’s category and 7 teams from men’s category and the next 4 rounds were done using KOTH(King Of The Hill) draw.

After 5 heated battle rounds, the results depicted on the leaderboard were as follows

After a breath-taking final clash , Moratuwa A grabbed the championship by beating Kelaniya A by 3:2&nbspand turning them into runners up. Former champions Colombo A had to satisfy with the third place.It is to be noted that in the five years history of Spell, this was the fist time that UOC lost a championship in either category.In the women’s category, Colombo A conquered over Kelaniya A with a dominating victory of 5:0 and Kelaniya B defeated Moratuwa A in the consolation final, securing the 3th place in the final list.

The closing ceremony was held in the evening with the honorable participation of the chief guest, Dr. Lalantha Amarasinghe President of Sri Lanka Scrabble League.

Mr. Suresh Chinnaiya, former National Scrabble Champion and Mr. Sapumal Gamage, the Treasurer of the Sri Lanka Scrabble Federation was present at the event and gave massive support by judging the whole tournament.

Official media coverage was done by MoraSpirit crew throughout the day.