Never Let the Fire Die Down – the Narrative of Chiranjani Abenarayana 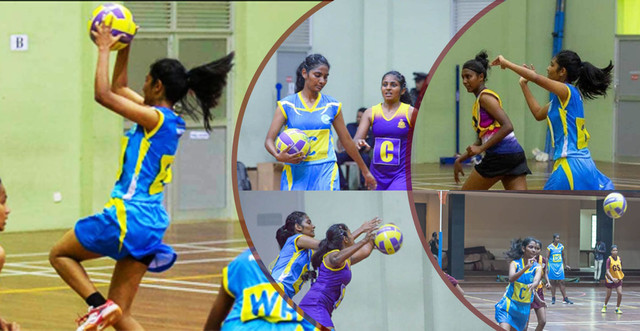 Never Let the Fire Die Down – the Narrative of Chiranjani Abenarayana

“Nangi, pass the ball,” her sister calls out. “Not again!” an inaudible murmur escapes her lips. She sprints across the ground, fetches the ball and passes it to the players. Uttering a silent plea for this to not occur again, she settles down to relish the game in serenity; only to be summoned again to fetch the ball which is adamant on escaping the netball court. And this is how it all started for Chiranjani Abenarayana, the netball captain of University of Jaffna.

She evolved into a promising netball player during her school days. With her team, she managed to assiduously embrace many triumphs during those eventful days for her school, Holy Family Convent in Kurunegala. Starting from 2008, her team slayed its way to the finals every year at both Milo and National School Netball Championships. Since they were determined to claim nothing but the title of winner or runner-up in the championship matches, it was no surprise when the team was discerned as the one felicitous selection to represent Sri Lanka for Pesta Bola Jaring US-Penang Tournament in Malaysia in the year 2012.

But what is a journey if it doesn’t have a single slip? Fears instilled upon her entry to a new arena, extinguishing the fire flickering inside her that urged her to play. This scenario, however, is quite unfortunately a paradigm of several untold stories of many outstanding school players. Upon entering the university, a novel playground with diverse challenges to encounter, tossing these formidable problems around wasn’t as easy as tossing the ball into the hoop for our ferocious netball player. Consequently, she virtually gave up on netball.

Apprehension owing to anticipation of adversities in terms of balancing the heavy academic workload apposite to undertaking medicine in University of Jaffna along with a strenuous sport activity elicited perturbation. A crushing sense of intimidation due to linguistic barriers obstructing effective communication slowly gnawed its way in. If such insecurities could cause such an established and experienced netball player to shut herself from the sport she loved the most for three long years, then those sure could have permanently dispelled sports from the lives of many eminent players upon their entrance to university.

Chiranjani may have been ready to give up on netball, but fortunately, netball wasn’t ready to give up on her yet. In 2019, she was compelled to take part in the Inter Medical Faculty Netball Tournament organized by University of Colombo. Skidding across the netball court, shooting the ball high up into the hoop, defending and attacking, passing the ball around tactfully, feeling the air rushing at her face, hearing the roars and the cheers of the crowd echoing in her ears, sensing the adrenaline rush… it was then that she realized how much she had missed the sport. It was then that she repented the most for having given up on something as precious as netball without even giving it a shot. It was then that she decided with utmost certainty that she would never capitulate to arduous circumstances but would rather set her heart to pave a way through by balancing it all.

With the fire rekindled and the valour revitalized, Chiranjani once again commenced her netball practices at the university, striving hard to regain all that she had lost in the lapse of three years.

Along with her new team, she practiced hard with the limited facilities at hand. Having just one grassy ground for all sports, their games were frequently interrupted by other sports practices. Since the university was situated quite far away from most other universities, they barely took part in any inter-university games. Most of her team mates were newbies with no exposure to netball matches. Conversing effectively with her Tamil teammates was quite challenging. Going back to their hostels which were located a few kilometers away from the university late at night after the completion of arduous practices was extremely problematic. Surpassing all those hardships to achieve the 2019 SLUG Netball Championship was a remarkable feat for the team. Reminiscing this memory, Chiranjani says with immense excitement that the feeling this match evoked in her is incomparable to any other match she had taken part in so far, owing to the several evident differences on the basis of experience of team mates, meager infrastructural facilities available and inherent communication hurdles.

She became the captain of the Netball Team of Jaffna University in 2020. The pandemic situation that is prevailing protractedly might have deprived her of matches, but when the netball is high up in the air once again in a tournament, the fire of zeal blazing within her is going to smash down everything standing in the way of her team’s triumph. And we shall await with anticipation to witness this play as it unfolds.