Preliminary round of baseball draws to an end 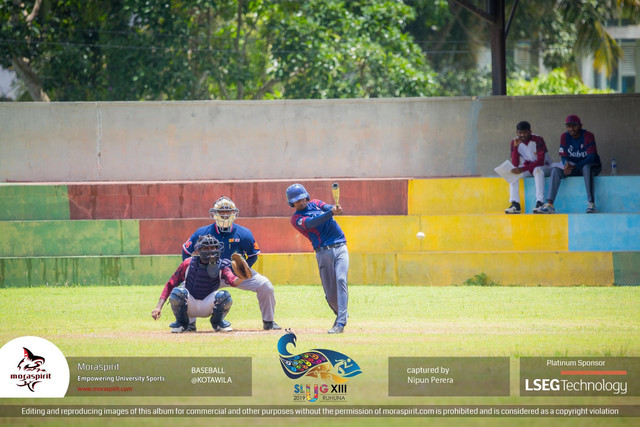 Preliminary round of baseball draws to an end

The preliminary round of the SLUG XIII baseball tournament came to an end today at University of Ruhuna. The participants of the quarterfinals were decided based on the results of this round, choosing 8 victorious teams out of the 11 participants.

The tournament was originally planned to be held with the participation of 12 universities. Participants were divided into four groups of three participants each. Two teams were selected from each group to proceed to the next round.

The teams included in Group A were University of Sri Jayawardenapura, Wayamba University of Sri Lanka and University of Jaffna. However, since JAF withdrew from the tournament, SJP and WAY were promoted to the next round with no competition. SJP won the match between the two teams, beating WAY 10-0.

Group B consisted of University of Moratuwa, University of Colombo and Uva Wellassa University of Sri Lanka. MOR emerged as the winners of the group, with splendid wins against COL and UVA, ruling the scoreboard with scores of 16-3 and 11-0 respectively. COL snatched the 2nd &nbspplace, winning against UVA with a score of 17-10.

Members of Group C were University of Kelaniya, South Eastern University of Sri Lanka and University of Peradeniya. PER defeated SEA and KEL, scoring 7-4 and 11-7, earning the place of winners. KEL emerged as runners-up of the team, with a score of 11-10 against SEA.

Following the preliminary round, the quarter-finals of the baseball tournaments will be held tomorrow (4th September) at University of Ruhuna. The matches will be held between SJP-KEL, MOR-SAB, PER-WAY, and RAJ-COL.

We at MoraSpirit extend our heartfelt wishes to all the teams participating in quarter-finals. Stay in touch with MoraSpirit for more sports updates.