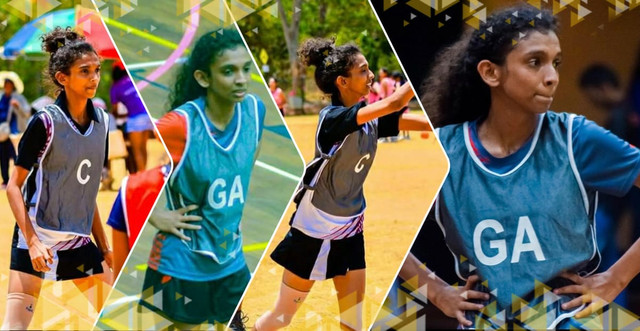 One of the famous American talk show host Oprah Winfrey once said that “The biggest adventure you can ever take is to live the life of your dreams”.  Every woman has her own inventory of dreams in her life.  Dreams always inspire one’s life while directing him or her to the purpose of their life. Ultimately it becomes the passion of their lives. Yahani Wathsala is one of the lucky girls who discovered her passion at a young age.  It was obvious that she was an outstanding team player during her undergraduate life at the Wayamba University of Sri Lanka.

Yahani completed her studies on applied sciences in 2019 from the faculty of Applied Sciences. She handled the court and track at the same time as a versatile team player who leads her team in several sports at the university.  Yahani was the captain of the university Athletic team in 2017 and the Badminton team in 2018.  She also earned the privilege of representing the combined university netball team during 2017.  In the same year, she was able to win the award for the most outstanding sportswoman of the Wayamba University of Sri Lanka.  She also won the university special awards for two consecutive years in 2017 and 2018.

Apart from that Yahani was a university color award winner of netball, athletics, and badminton consecutively for three years in 2016, 2017, and 2018.  As the pinnacle of her journey, she was able to represent the Sri Lankan national university netball team for World University Netball Championship held in Uganda during 2018.

Yahani was the most outstanding student of Sacred Heart Convent-Galle for the year 2014.  She was a Southern Province color holder for Netball during the years 2012 and 2013.  Simultaneously she was awarded Sri Lanka Schools Sports Colors for Netball and she represented Sri Lanka Schools Netball Team for Waverly International Schools Netball Championship held in Australia in 2013.

As Moraspirt team we thought to share her experience with her own words so that, it would inspire the younger generation of the university sports arena.

How did your journey begin in sports?

I started my journey in sports from badminton in 2003, when I was in grade 3. I joined the badminton team because a couple of my friends were already playing and I also wanted to play with them. In the very first year, I participated in badminton tournaments representing the under 12 school badminton team. Starting from Badminton, then I participated in school, zonal, provincial, and all-island level athletic meets from grade 4 onwards. In grade 8 I joined the school Netball team because of a request from Ms. Jayani Abeydeera. Without her dedication, I won’t be this successful as a netball player. I would also like to mention Rev. Sister Disna, Rev. Sister Patsy, Ms. Miranda, Mr. Wickramarachchi, and all the teachers of my school, wouldn’t have come this far.

What made you carry on with sports?

My parents and teachers encouraged me to involve in badminton, athletics, and netball. I enjoyed all three games and later in my school life, engaging in sports helped me to maintain my stress level improve my confidence.

Does your family have a sports background?

My mother was also an athlete during her teenage days. She had participated in 100m, 200m & long jump events when she was in school.

How was the support from your family in order to proceed with your journey?

My parents refrained from forcing me to do only my studies. They just asked me to balance both in whichever way I can.  They never forced me to quit sports, maybe, because my mother knew how it felt to do sports. My father and my older brother also supported me in numerous ways to balance my studies and sports.

Do you have any unforgettable memories of your university sports life?

I am unable to forget the day I was selected for the World University Netball Games. As it was a victory for me and my university, I feel quite proud of the moment. Especially I would like to mention my university netball coach Ms. Chanika Chathurangani, She was the person who stood by me in every achievement during my university netball life. And I appreciate my university badminton coach Mr. Prashan Chinthaka and all the lecturers who fostered me at the university.

How did you practice to balance both academics and sports?

Truly speaking, even I can’t say how I balanced both. However, I believed in myself and I realized that it’s easy to learn and remember stuff after the routine of a tough physical practice. My friend Sanduni was with me to support me in every matter of my studies at school.  Similarly, Gayathra & Ishanka supported my study matters during university life. So it was easy for me to balance both sports and studies.

What sort of challenges did you meet in your sports career?

The hardest part was balancing studies with sports because I had to participate in three different practice sessions. There were certain days, which I had practices the entire week. On the other hand, I was determined to complete my bachelor’s degree program with a class.  Therefore, I had a goal to accomplish.  Gradually, I practiced to organize myself and adjust my day-to-day matters with tremendous sacrifices.

What do you think about the reluctance among women to join sports, especially at the university level?

According to my view, I see most of the girls won’t participate in sports activities thinking that it will impact their studies. Basically in the first year, most of them will join a sport, and later on, they break off due to the academic pressure.

If anyone who’s out there in university who hasn’t done any sports at school but wishes to participate in a sport at university, what is your advice for them?

I should mention that, with the right balance, sports and studies would be a winning combination that no one can take away from you. Because it includes all—competence, confidence, connections, character, and caring.

Do you think it is worth it to start a sport at the university level?

Definitely yes. I may have some hidden talents even now.  I won’t be able to realize them if I didn’t grab any chance to take the opportunity. So the university is a place where we can catch up with any hidden talents within us. And age is not a barrier, it’s just a limitation that we have built in our mindset.

How do you think freshers can improve themselves to become a university-level player?

Practice with a purpose, then you can play with a passion for sure.

Having a purpose often encourage you to proceed with your passion. Definitely, this would be a motivational discussion for the emerging young blood in every university.

Meanwhile, it was a pleasure to hear Yahani Wathasala who was an all-rounder with an extensive range of experiences in university-level sports life. It is obvious that she is a multitalented sportswoman who is precious to our motherland, Sri Lanka. As the Moraspirit team, we are wishing all the best to Yahani Wathsala to succeed in future endeavors. with an incessant sense of encouragement.