Racquets are ready to conquer the glory 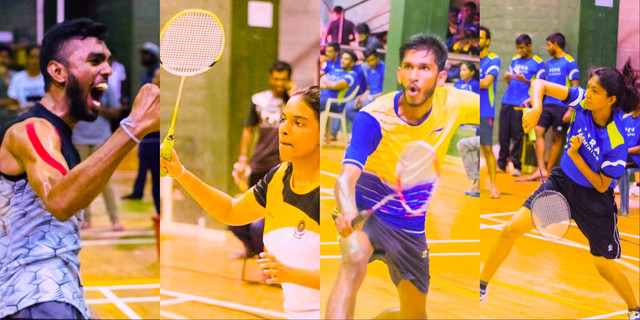 Racquets are ready to conquer the glory

The chronicles of SLUG XIII are slowly unfolding to their full glory, leaving university sport enthusiasts all over Sri Lanka in a haze of adrenaline-pumped exhilaration. As sportsmen and sportswomen clash against each other for the same goal, victories and defeats define the destiny of universities in the points table. The triennial event, which is the most significant battleground in university sports in the country, is proudly hosted by University of Ruhuna this year. Among the sports events included in SLUG 2019, badminton is definitely one of the most anticipated ones. The tournament is scheduled to be held from 28th to 30th August, 2019 at the Gymnasium of University of Ruhuna. With just a couple of days remaining till the battle begins, enthusiastic fans are already on the edge of their seats.

The crown in the men’s category of badminton seemingly has quite a few candidates with significant flair. Badminton teams of several universities have exhibited promising talents in the last few years. The badminton tournament at SLUG XII held in 2016 was lined with many prestigious as well as thrilling moments. University of Moratuwa seized the championship after a fierce battle with the University of Colombo while the University of Peradeniya grabbed its place as the second runners-up.Following SLUG XII, sportsmen and sportswomen had two Inter-University Games events to refine and glorify their talents. The men’s championships at IUG 2017 and 2018 were won by University of Sri Jayewardenepura and University of Moratuwa respectively. Players of University of Colombo showcased their brilliance by being placed as the runners-up in 2017 and second runners up in 2018.

In the women’s category of badminton, University of Jayewardenepura has exhibited a clear dominance in the past few years, with a streak of three inter-university championships. The team has gracefully grabbed the crown at SLUG 2016, IUG 2017 and IUG 2018.University of Kelaniya was placed as the second runners up in SLUG 2016 and IUG 2017. Players from University of Moratuwa, Sabaragamuwa University of Sri Lanka, and University of Peradeniya have displayed their skillfulness as well, by grabbing top places at recent university games.

All sports enthusiasts are eagerly waiting for the outcome of the badminton tournament at SLUG XIII. Whether the current big names in university badminton will retain their places or surrender to novel stars will be determined soon – Stay tuned with MoraSpirit for upcoming results! We at MoraSpirit wish the best of luck for all the participating teams to do their very best at the tournament.