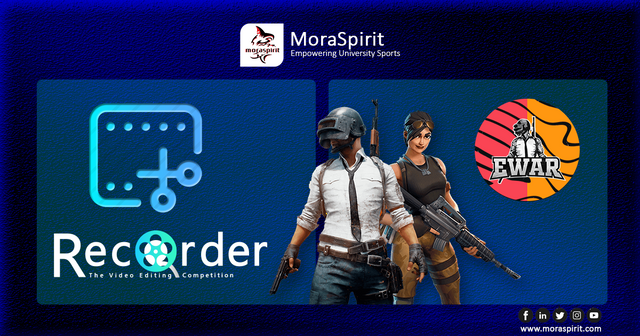 MoraSpirit successfully concluded two virtual competitions, Recorder and EWAR. First held was “Recorder”, a Video editing competition. The competition was open to students from all the universities in Sri Lanka. The Platinum Sponsor of the “Recorder” was Balanita.

The First Facebook announcement about the “Recorder” Competition was put on 23rd April 2021. The registrations had commenced on 2nd May 2021 and concluded on 9th May 2021. There were so many registrations from many video editing Enthusiasts. After the registration, the participants of this competition were told to submit their creative videos based on the images and footages provided by “MoraSpirit”, on or before 20th May 2021.

After the submission period, the first round of judgement took place, i.e., the judges had selected the best videos out of the submitted ones, to be posted on Facebook. After that, the selected videos were released on Facebook and voting for “the most popular video” commenced on 25th May 2021 and concluded on 27th May 2021.

“EWAR” is a gaming competition which was open to students from all categories. This competition consisted of two main games – PUBG for mobile gamers and Valorant for PC gamers. The platinum sponsor for the game was LSEG technology, and the beverage sponsor for the game was Redbull, the popular energy drink brand. The initial announcement was made in Facebook on 19th May 2021.  The registrations for both the games commenced on 30th May 2021 and concluded on 3rd June 2021. In total, more than 150 teams registered so there was a lot at stake.

For the game “Valorant”, the teams were made to compete with each other directly. But for “PUBG Mobile”, all the teams were divided into five groups and the teams in each group were made to compete with each other. Each teams consisted five members The live commentary of both the games was given by Rashith Yapa who goes by his streaming name 'Hamilton Thadiya' and Rukshan Senanayake from University of Moratuwa.

The competitions for qualifying rounds for both games took place from 8th till 11th June according to the specified timetable made by the organised committee. All the gaming were aired live on MoraSpirit official Facebook page.

The semifinal and final rounds took place on 13th and 14th of June. The events were aired live in both Official facebook page of Moraspirit and Official Moraspirit Webpage.

The Winners of EWAR was officially announced on 15th June 2021 in the official Facebook page. The winners were as folows.

2nd Runners up - Crash Landin on you

The winners would receive cash prizes and gift bundles by the sponsors. Once again, we give our sincere thanks to LSEG Technology and Redbull who were the official platinum and beverage partners of EWAR respectively. These events would not have been successful if not for the hardwork of our MoraSpiriters and would also wish to extend our gratitude towrads the Organising Committee members.