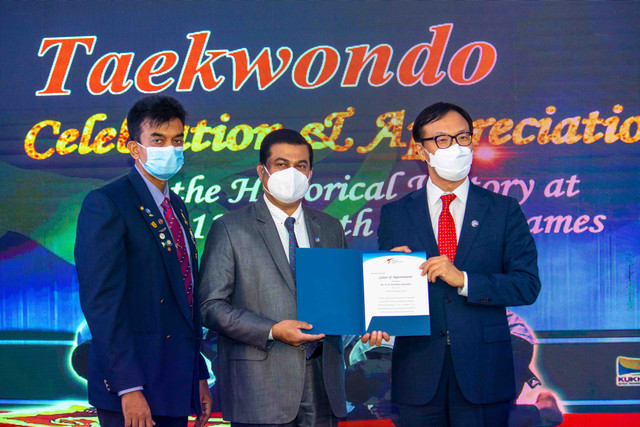 7 history making female Taekwondo martial artists from our universities, who brought pride to our motherland as part of the 2019 South Asian Games Taekwondo team, were felicitated in grand style at the Grand Monarch Hotel yesterday. This felicitation was to celebrate the success of everyone who worked hard in raising the Sri Lankan flag high in the Taekwondo Dojo at the SAG held in Katmandu,Nepal.

This event became a reality after some time due to the lockdown situation that prevailed last year but it wasn't too late to give them the appreciation they richly deserved. This event was organised by the Sri Lanka Taekwondo Federation with the presence of many dignitaries. The gathering was welcomed by the Chairman of the Taekwondo Federation and Sabaragamuwa Provincial Council Minister, Hon. Kanchana Jayaratne. This was followed by the speech of State Minister of Rural and School Sports Infrastructure and Promotion, Hon. Thenuka Vidanagamage. Another special guest of this event, the Ambassador of South Korea to Sri Lanka, Mr. Woojin Jeong, expressed his love for Sri Lanka and future developments of Taekwondo in his speech. The artistic fighting display by the Army Taekwondoins was just a glimps of the sport but entertained everyone present.

The vibrant display of lights and colours could not outshine the bright future of the Taekwondo martial artists who made a record breaking performance of winning 27 medals and achieving 3rd place in the overall table. This was pointed out by the chief guest, Minister of Youth and Sports of Sri Lanka, Hon. Namal Rajapaksa. "We have to build the infrastructure, not just to win within our region, but beyond. We have the Asian Games, Commonwealth Games and the biggest stage of all, the Olympics. I'm sorry to say this Hon. Woonjin, you have done a great deal in uplifting this game in our country as the Ambassador of South Korea, but some day, we are going to defeat your country in your home soil and come back home with the medal."

In the awards ceremony, the following who were University students at the time of competing were felicitated.

Not only the medalists but also the hardworking coaches got a fair share of the limelight in the awards ceremony. The conclusion of the official proceedings was followed by the fellowship and dinner. It was very refreshing for everyone who gathered to celebrate a milestone that can go a long way in the near future. It was also quite entertaining to see the Hon. Jayaratne showing his enthusiasm on stage with a few songs to get everyone on their feet, for he is also a singer.

This event was a great example on how hardwork and dedication by all the stakeholders in a sport, from the administration to the coaching to the players, it is possible to challenge the impossible and we as MoraSpirit wish the best of success to the future of these talented sportsmen and women of Taekwondo.