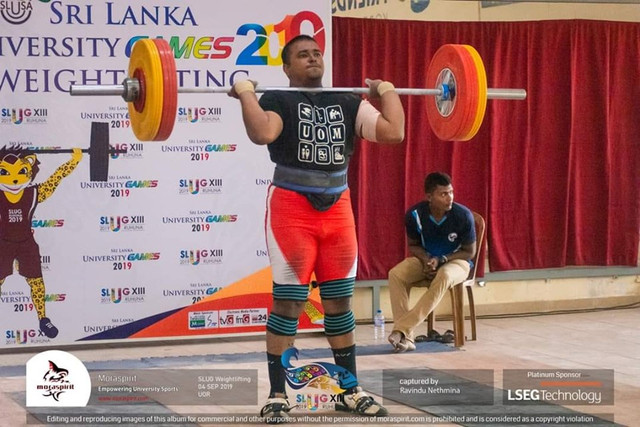 The concept of sportsmanship reaches far beyond the sport itself. It includes qualities of patience, dedication, integrity and many more. This concept came to life at SLUG XIII, as Sineth Eranga Wimalasiri, the captain of Weightlifting Team of University of Moratuwa, performed a brilliant act that sadly marked the end of his journey in weightlifting.

Sineth is a 4th year undergraduate of the Department of Electrical Engineering, University of Moratuwa. Being a dedicated player as well as a dynamic leader, he was always known for his mastery of the sport. He was determined to lead his team to victory at SLUG XIII. However, things took a difficult turn for him when he dislocated his left shoulder during practices a few days before the tournament. Being the devoted player he was, Sineth did not let his arm hinder his motivation – he took a determined step forward to relieve his pain with painkillers and perform at SLUG, competing under the 102kg weight category.

Fate was not being kind to Sineth as he dislocated his shoulder once again during the warm-up session of the tournament. It should be noted that dislocation of a shoulder is often associated with tears in ligaments and tendons, which, needless to say, results in excruciating pain. It is almost impossible to actively engage in a physically demanding sport under those conditions. Nonetheless, Sineth proved that the impossible becomes possible when the mind is strong enough to conquer the boundaries hindering it. Enduring that immense pain, he bravely competed in the name of his university for one last time. Filling the crowds with awe, he lifted a weight of 100kg and emerged as the second runner-up in his weight category.

Unfortunately, this heroic act will be the very last performance in Sineth’s weightlifting career. Commenting on the incident, he wrote on his Facebook wall, “My strongest jerk became my weakest lift. However, I can’t lift again with my weak left shoulder. It means I’m officially out of my weightlifting life as a lifter.” Signing off from his captaincy, he wished his team good luck to perform well at future events.

Though Sineth did not win the championship in his weight category, he won the hearts of many sports fans through his splendid performance. The glory of his heroics rises higher than that of a mere victory, for he will always be remembered as a great sportsman and an exemplary person. Though his journey as a weightlifter draws to an end, his characteristics of true sportsmanship will always accompany him in his journey of life, leading him towards victories. We at MoraSpirit salute Sineth for his bravado and wish him all the best for his future endeavors.