SJP basks in the glory of the Baseball championship 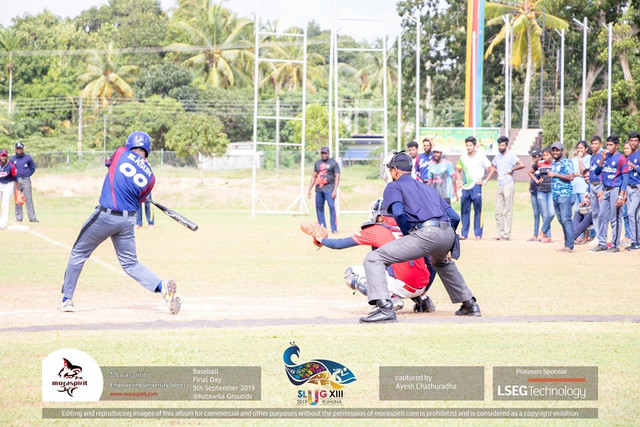 SJP basks in the glory of the Baseball championship

The four-day-long battle of baseball at SLUG XIII finally reached a glorious ending on 5th September, crowning University of Sri Jayawardenapura as the champions. Sports enthusiasts of SJP continue to be overwhelmed with joy as the addition of yet another championship stabilized the position of the university at the top of the point table. The team conquered the field with a well-deserved victory for the second consecutive time.

The semifinal between PER and SAB was a tight battle. Both teams competed neck to neck until the last moment when PER finally surrendered to SAB 15-12. In comparison, the battle between SLP and COL seemed to be an easier fight for SJP. The team defeated COL 8-1 and made their way to finals.

However, SJP faced a challenging battle at the finals against SAB. The Kotawila Watta Playground was alive with excitement as the tantalizing taste of victory kept oscillating between the two teams. After hours of intense competition, SJP trounced SAB by a single point, defending its throne as the champions of SLUG XII held in 2016. Though they did not have mant winning moments at recent inter-university baseball tournaments, the performance of SAB against the former champions is definitely noteworthy. With a score of 14-13, the match was exceptionally tight in comparison to the other matches played by SJP within the tournament.

The consolation final took place between PER and COL at BOI Grounds, Koggala. PER portrayed their flair by subjugating COL with ease, dominating the scoreboard 16-4. This is a significant achievement for PER this is the first time that the team made it to the top three in the recent history of university baseball.

Being a beautiful game that employs both brawns and brains alike, the baseball tournament was one of the most anticipated events of SLUG XIII. Since SLUG is once-in-a-lifetime experience for most players, the memories it left in the hearts of players, both sweet and bitter, will always be remembered. MoraSpirit extend its heartiest congratulations to the winners of tournament, and the best of luck for future endeavors of all teams.