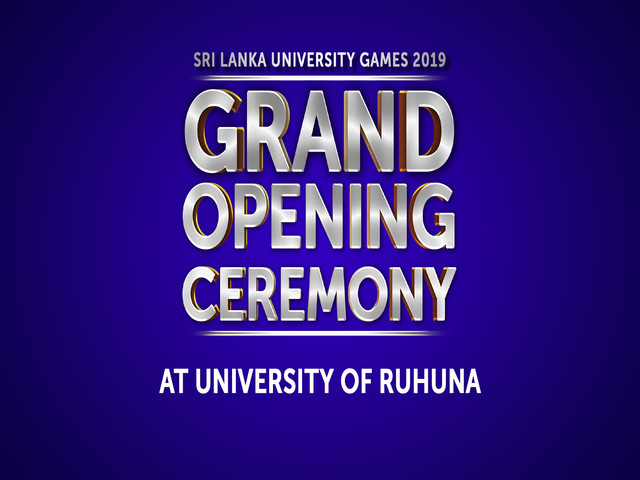 The prestigious ceremony of the university sports and the ultimate battleground for the university athletes, Sri Lanka University Games commenced at the premises of the University of Ruhuna marking its 13th opening. Maithripala Sirisena, the President of Sri Lanka, officially declared open the tournament which will host 14 universities competing against each other in 22 sports in the coming two weeks with the participation of around 1000 athletes.

Often dubbed as the “Olympic” of university sports, SLUG is held every three years since its introduction in 1980. The tournament, which consisted of only 12 sports at the beginning, has now expanded to 22 sports. The University of Ruhuna has won the privilege of hosting the event this year from 26th August to 7th of February. Today marked the ceremonious beginning of the SLUG which precedes two weeks of relentless battles among the university athletes to add their names to the golden history book of university sports.

The tournament opening was honored by the appearance of His Excellency Maithripala Sirisena, the President of Sri Lanka as the event’s chief guest. The Governor of the Southern Province Hemal Gunasekara, President of Sri Lanka University Sports Association (SLUSA) Professor Thilak P. D. Gamage, Secretary-General of SLUSA Palitha Weerasinghe, and Vice-Chancellors of the 14 participant universities including the Vice-Chancellor of the University of Ruhuna Professor Sujeewa Amarasena graced the event along with the President.

The tournament was declared open by the President Maithripala Sirisena following the lighting of the Olympic Lamp. Five participants of the World University Games from the University of Ruhuna carried the lamp from Devinuwara to the university grounds where Piumi Ahinsa Jayamini and Kalana Sachintha Wickramarachchi, together, lit the Olympic Lamp setting a gracious beginning to SLUG 2019.

Addressing the gathering the President emphasized the importance of sports for the university students who have a greater responsibility in shaping the economy and future of Sri Lanka. President of SLUSA, Thilak P. D. Gamage also expressed the importance of sports for building the personality and developing the mental, physical, and social aspects of a university undergraduate. Mr. Gamage stated that one of the main goals of SLUG is “tempting students who do not engage in any sport to start doing a sport”.

The opening ceremony of SLUG 2019 concluded successfully letting the true spirit of the tournament, the sports themselves, take the center stage. Netball, swimming, and taekwondo will be the first of many sports to follow at the SLUG 2019 arena as their course begins tomorrow. Sixteen sports will be held in the upcoming two weeks at the University of Ruhuna and its surrounding premises. Other six sports, cricket, rowing, rugby, hockey, tennis, and track & field, has been held in the weeks leading up to the opening ceremony and have effectively concluded now.

It is no doubt that SLUG 2019 will show the true passion and talent of university athletes in the coming weeks and will be a true spectacle for the spectators. Join with MoraSpirit to access the latest results and updates from the tournament as we bring you the full coverage of SLUG 2019.