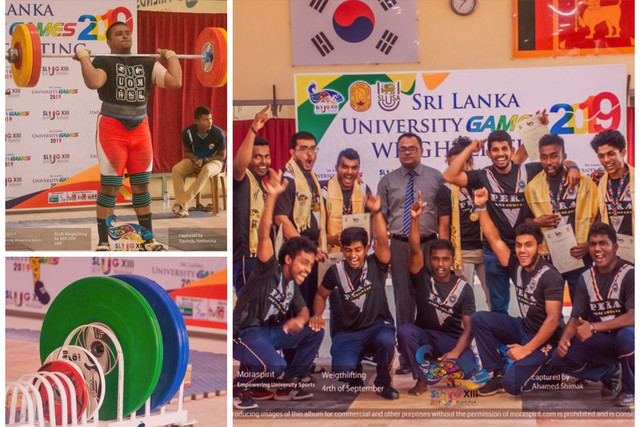 Weightlifting, in which the recorded origin leads to ancient Greece and China, have a lengthy history. Weightlifting event of SLUG XIII came to an end on 4th September at the University of Ruhuna premises crowning University of Peradeniya as men’s champions. Eventhough both Mens and womens events were held, womens events did not contribute to the overall points table.

A sportsman must be appreciated for his physical talents as well as the sporty spirit within him. Sineth Ernaga Wimalasiri, the sports captain of University of Moratuwa and the captain of the weightlifting team showed an outstanding heroic spirit at the last weightlifting event in his University sports career. Although he was suffering from injury in his arm, it did not did not blew his will and passion away. Eventhough he could not achieve the gold medal due to his physical condition, his shear determination was enough for him to become the 2nd runner-up of 102 weight catagory. He showed this outstanding performance on behalf of Mora and his team by lifting 100 kgs weight. His immence dedication and determination marked his name as a winner not only in the score boards and the flyers, but even in the hearts of the audience who were present around the platform. He proved that the physical fitness too can be challenged by the spirit of the mind.

After two competitive days, weightlifting events ended&nbspby crowning UOP as supreme champions.We MoraSpirit would like to give warm wishes for the winning teams for their victories and the outstanding competitor Sineth Wimalasiri for his unbelievably strong will and passion. Stay tuned with Moraspirit for more updates.