STAGGERING RISE OF A NEW CHAMP IN THE TATAMI 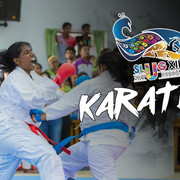 STAGGERING RISE OF A NEW CHAMP IN THE TATAMI

The second and the final day of Karate brought out a new energy from all the teams competing neck to neck literally fighting for the win. Gloomy but dry weather continued throughout the day unlike the wet Kata experience on the Sunday, as if hinting for a pending change in the winds for the overall karate results.

The events for the day commenced with the lightest weight categories for both the men’s and women’s competitions under 50kg and under 45kg respectively. The karatekas from the government universities around the country showed that light in weight did not mean they are any less in fierceness. The two tatamis in the hall 1 of the University of Ruhuna, where the matches were hosted for the entirety of the 2-day period, separated for men’s and women’s games managed to make viewers debate where to look.

The fights extended more than the usual periods due to the video reviews introduced that the supervisors for the matches from both teams took the full advantage of in almost all the matches. KEL player, T. L. S. Prabhashini managed to win through all the opponents she was faced with securing the gold medal while SAB came 2nd and RAJ and COL players 3rd in the women’s under 45kg category. In the men’s kumite under 50kg the SAB player M. F. L. Farhen secured the first places winning over JAF in the final round, while RUH and PER players ended up as joint 3rd places.

Under 50 kg women’s kumite and the under 55 men’s kumite categories followed after a short break. The W. E. M. G. M. Adhikari of KEL managed to win through to the end securing the win of the event in the women’s category, while the finals decided the second place for A. P. S. P. Abesooriya of SJP and the VPA and PER shared the third place. The points in the initial matches were all flowing one-way, but the karatekas all in-play and out of play could be seen fully focused on the techniques that would be advantageous and the flaws in the opponents to be used against them. And the tatami opposite had a different vibe of energy. Little spent idle during the play, the players were fully focused on getting the maximum benefit of the time and the space they were restricted with. Playing for a over and hour the final result came up giving the first place to B. H. R. Bogahawatta from RUH while the SJP player came second and the joint third places secured by the UWA and SAB players.

The play then moved on to the heavy weight categories scheduled for the day. The female under 68kg gold medal was secured by K. H. G. S. U. Jayasinghe of COL while S. T. S. Thenuwara of JAF came second at the final round. KEL and WAY shared the third place of the event. The players and teams together are energetically involved the plays and does not show any sign of fatigue for the hall 01 blasts with the joyous cheering continuously through the event as a point get secured by one or another. And at the left tatami, the PER player of under 84kg category came the first and SJP the second, while RAJ and COL jointly became 3rd places. The lunch break followed as the mid-day was way past amidst the interest of the day.

In the heavy weight category events that continued, the lunch definitely had made a change in the energy of the teams. Even as the day proceeded towards the end, the players and the teams sounded much too interested to give the cheers a rest. In the over 68kg category S. L. A. Maneesha, the COL player, could be seen taking the use of her height in attacking all her opponents and easily rising up to the final round. Kicking far and high where the Mahavasis simply were unblockable, the COL player had made it her signature attack against all. However, at the final round with the KEL player S. J. S. S. Dinethsala, the signature move was turned against COL through the fast and targeted punches of KEL, making KEL the winners of the category and COL the second. WAY and PER shared the third places of the event. In the Men’s kumite events over 84kg ended leaving KEL victorious after a fiery battle. The punches and kicks that are hard to control and hitting with a higher moment the battle was a real one for the players in controlling their power and hitting the targets to earn points. The second place of the event was secured by the PER player K. G. Edirisinghe, and the joint 3rd places by N. R. Kumarage of MOR and D. D. P. C. Pemarathna of COL.

Under 55kg category of women proceeded, and the victory of the category went to L. M. H. M. Cabral and SAB player secured the second place while JAF and COL jointly shared the 3rd places. And coincidingly the men’s under 60kg category results came out making the COL player H. M. W. A. B. Wijerathna the winner of the category and PER player the 1st runners-up. UVA and KEL players became 2nd runners-up for the event after the hectic battle for the win. The event proceeded with blasts of cheers that the walls could not contain within at times, and others as silent enough to here the creaking of the brains of the players, hard at use.

Under 61kg kumite final results came making WAY the winners of the event and KEL the 1st runners-up. While MOR and VPA players ended up and the third runners-up. Injuries are common in a martial art play. But karate requires control as well as power. All throughout the play several slight injuries could be seen that caused a few delays in the progression of the matches making shouts of warnings fly time by time. The match showed how a slip of control could affect the opponent and the results at a kumite arena. On the male events, of under 67kg category, the KEL player D. T. D. Jayasinghe won the first place while SAB became the second at the final round. RUH and MOR players secured the third places.

Through to the end the players fought to get the maximum use of the couple of minutes available to them to line up their paths to the ultimate win. By the final match of the day, under 75kg men’s category, the night was deep and dark. But the spirits of the teams were still lightening the arena as the MOR player U. G. L. Madushan became victorious during the finals over the KEL player R. Ramakrishnan. COL and SAB players secured the third place.

The event of where aiming, attacking, retreating and defending all has a meaning to themselves for being a move in the path to the win, ended with the day leaving mixed emotions at the hall.