"Stick to the Hockey Stick!" with Navanjana Ekanayake 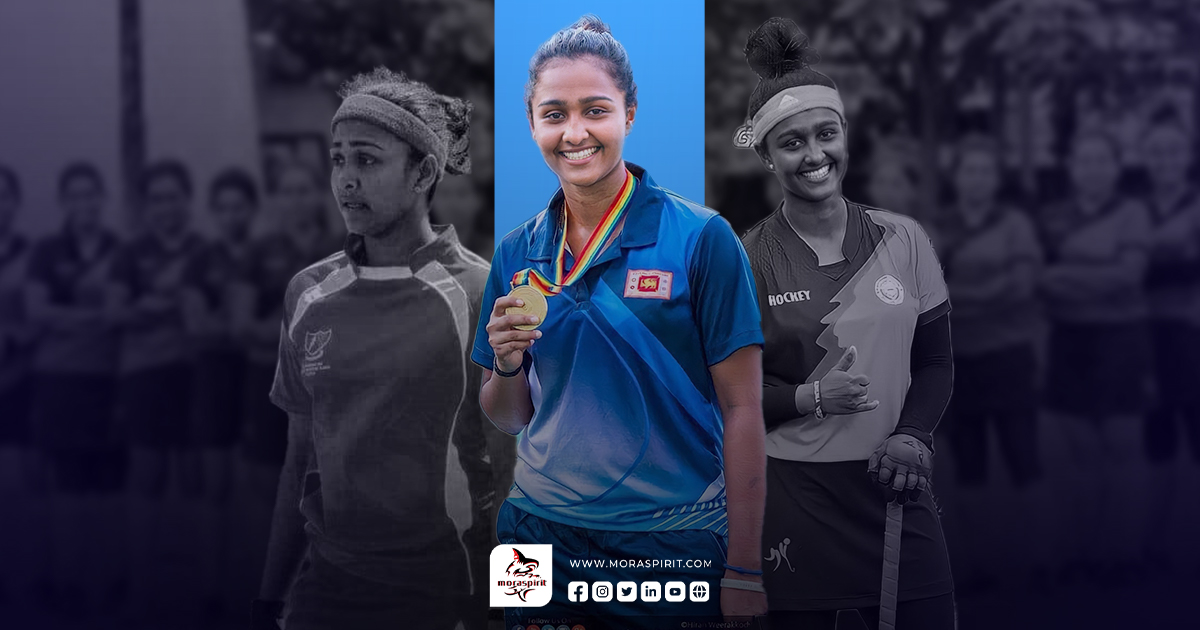 "Stick to the Hockey Stick!" with Navanjana Ekanayake

When the 8-year-old Navanjana held the hockey stick for the first time in her life, little did she know that the hockey stadium is where she’d dream big and materialize her big dreams. Navanjana Dilrangi Tharika Ekanayake has a 16-year streak of shining as a lethal striker in field hockey, as of this year.

The sporty and athletic Navanjana has smashed balls with rackets in tennis and bats in cricket and elle. However, her physical training instructor made her try her hand at field hockey too. With her district, Matale, being famous for hockey, little Navanjana excitedly held on to the hockey stick tight, embarking her journey in field hockey.

Our protagonist has no family background in any sport, let alone hockey. But with her involvement in the game, she pulled off the remarkable feat of inspiring her younger sister and cousins to embrace and enjoy field hockey like her.

Field hockey is a competitive eleven aside game with the target of scoring goals by striking the hard ball into the opponents’ goal while conceding their own goal. This target-driven aspect of the sport propels Navanjana to aim high and persevere. That’s how Navanjana dreamed of relishing the thrilling energy of being Team SL during her school days itself. With her mind set on Sri Lankan women’s hockey national pool, she worked step by step.

She made it into the school hockey team first. She took on the stellar role of the game, the center-half. Center-half is one of the most crucial positions from which the whole game can be manipulated. However, Navanjana with her agility, all-round hockey skills, vision and game-awareness, has been a very promising center-half throughout her hockey life in MT/Sri Sangamitta Girls National School and later in Sabaragamuwa University of Sri Lanka.

Navanjana embodied true commitment for the game and the team. Therefore, it wasn’t a wonder when she was chosen to lead the school teams for all age groups, under 13, under 15, under 17 and under 19, throughout her school days. Under her captaincy, the valiant team of girls bagged stupendous triumphs for the school in all-island level.

She gradually grew to represent and then lead the Matara Schools Combined Team and Central Province Team. In neck and neck hockey matches where the dynamic match momentum and score line swing like a pendulum, Navanjana has born the double pressure of playing both the captain, who leverages her team mates’ finesse in hockey, and the center-half, who changes the game to their favor. Nevertheless, she has never let the stress get to her, owing to the endless support rendered by her steady squad.

A decade of her hard work in field hockey made her dream come true. She entered the national pool as the youngest gun in the team in 2016. That year she featured in her maiden South Asian Games, in India, and the team brought home the sparkling silver medal. Navanjana had developed the true essence of leading and being led for hockey. Therefore, sharing the field with the competent senior players in the national pool proved to be an enriching experience for Navanjana.

Our hockey player is a dreamer. Soon enough she got back on track to pursue her new dream of becoming the captain of national women’s hockey team. Unfortunately, as ambitious Navanjana shared with us, there hasn’t been a national pool for women’s hockey since 2017. The prevailing condition of the country’s women’s hockey has deprived many young ladies their chances of representing and leading the nation in international arenas.

Hockey is intricately fused with Navanjana’s life and decisions. Which is why, to sate her craving for hockey, she chose to enter the Department of Sports Sciences and Physical Education. And in no time, she led the Sabaragamuwa hockey girls to victory in Inter University Games and SLUG. Never wanting to let go of her hockey stick, she even aspires to seek a job that wouldn’t curtail her game.

Navanjana considers herself extremely lucky since her family, school and faculty have always offered their fullest support in her hockey conquests and educational endeavors. With all the backup, she has diligently balanced academics and hockey, treading along a road of sacrifices and rewards.

As we wrapped up our interview with our talented hockey star, she offered the lessons hockey had taught her in a nutshell – Regardless of who you are, how old you are, whether you have played a sport before or not, just muster up the courage to give a shot at any game you like. When the rhythm of the game kicks in, you’ll never turn your back on it. As you embrace the sport, team spirit, discipline, leadership, determination and commitment will embrace you. You will play to dream and dream to play.

As Navanjana inspires yet another girl to hold a hockey stick, we wish her all the luck to continue cooking wonders with her own hockey stick!