Tehani Egodawela: The Sharp Shooter from Navy on a Mission for Gold 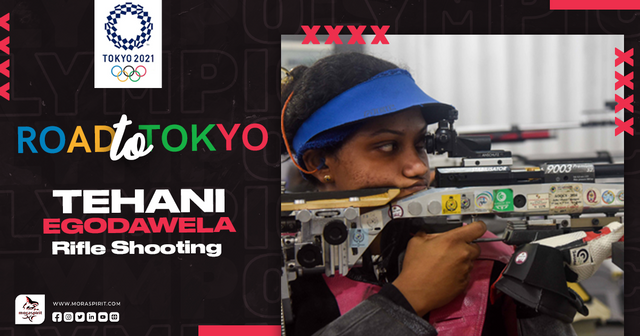 Tehani Egodawela: The Sharp Shooter from Navy on a Mission for Gold

The shooting events of the Olympics are under three categories with five occasions per each. Rifle shooting, which is a member of the shooting family, can be taken as one of the most exciting Olympic events. In brief, there are 10 concentric rings and the player has to target the innermost bull’s eye to acquire more points. Regardless of the little targets, shooting has impressive observer advance. The pressure before discharging, the elation of a fruitful shot and the sensational changes in positioning brought about by even the smallest error all make for a convincing encounter. Consequently, a rifle shooter needs to be an all-rounder both physically and mentally.

Tehani Egodawela, a woman with a starring role who was born on 19th April 1986, is an amazing character who has brought both the Sri Lankan Navy and the name of the country to an utmost level by working on her discipline, rifle shooting with wholeheartedness. She joined the Navy in 2006 and step by step became a preeminent rifle player. Tehani Egodawela has represented the Sri Lanka Navy Musketry Pool since 2011 and merged into the number one rifle player seven times by representing the national pool since 2012. She was successful to compete in both national and international level competitions in extravagant ways.

With all the hard work and continuous training, the distinguished personality Tehani was successful to add more colour to our mother nation by having a front world rank in women’s 10m air rifle event. As an account of her surpassing dedication and years of tedious efforts, she was qualified for Tokyo Olympics 2020 in the women’s 10m air rifle 0.177 event. With our immense pleasure and great exultation, we cherish the fabulous persona, Tehani Egodawela to acquire more and more titles through her path to add more glory to our mother nation.