The barest of all margins 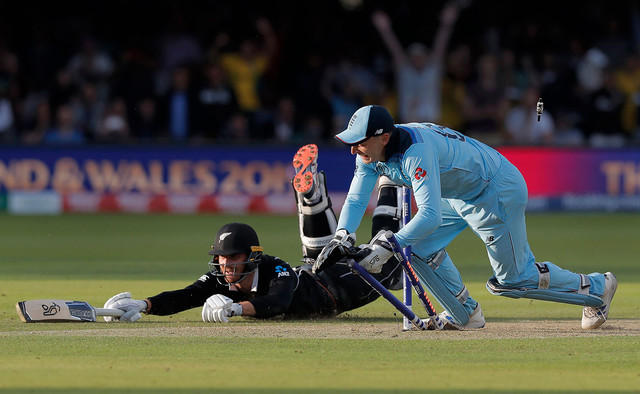 The barest of all margins

45 days and 48 matches of engrossing cricket had all come down to this equation. The eyes of the entire cricketing world were focused on a quiet corner of St John’s Wood in London, where the Mecca of cricket, Lord’s Cricket Ground had stood since 1814. The subject of attention, the final of the 2019 ICC cricket world cup where two sides were duking it out on the hallowed turf with the shared ambition of world cup glory. In one corner, perennial dark horses New Zealand, aiming to avenge the heartbreak of losing the 2015 world cup final. In the other corner, perennial underachievers England, who despite having invented the beautiful game, were yet to lay hands on the most coveted prize in it. In a way it was fitting that these two teams faced off in the final, since England, after a&nbspdismal 2015 campaign, overhauled their entire approach to the one day game, adopting a new fearless brand of cricket inspired by the way in which New Zealand played in the 2015 tournament. Four years later, England had put together what was arguably the most feared batting lineup in the modern game and were in touching distance of the trophy they so desperately craved.

It was amidst this background that the previous 99 overs of play had led to the very last over of the game.In a tournament of middling scores it was fitting that the final was of the same nature, New Zealand having put up a decent total of 241, after which they bowled and fielded out of their skins to bring the game to a point, with England needing 15 runs with just 2 wickets in the bank where they were&nbspslight favourites. However, in their way stood Ben Stokes, playing out his own redemption arc after a ban for ill-discipline which cost England dearly in the Ashes and who had shown time and time again his penchant for digging England out of tight spots. Speaking of redemption, what about the man tasked with delivering the final over, Trent Boult, one of the premier bowlers in cricket but who had just dropped a catch from Stokes in the previous over. You often&nbsphear the cliche about no second chances in sports, but here was that rare contradiction. The question was if Boult would take it or if Stokes would be England’s saviour once again

Boult delivers on his reputation and delivers an inch perfect yorker which Stokes can only jab out to point. He declines the single on offer. He knows he can’t trust anyone else to do the job. If England are going to win the world cup, Ben Stokes is going to have to go it alone.

Another yorker, another declined single. No one doubts that Stokes has the ability but the pressure on him is building up to a crescendo….

….. And Stokes delivers with a massive six over mid wicket.If there is a physical embodiment of, “When the going gets tough, the tough gets going,” it was Ben Stokes in this moment. Now the pressure is back on Boult

This match has honestly had more plot twists than an Indian soap opera. Just when you think the drama has reached its climax there is still another twist in the tale waiting to surprise you. Boult reverts to his plan of bowling yorkers and the ball is played out to midwicket. Stokes in his need to retain the strike is sprinting back for two. The man fielding the ball is Martin Guptill,who has had a dismal world cup but now has the chance to win the world cup for his team. He fires in a throw and Stokes dives desperately to preserve his wicket….. In the words on commentator Ian Smith, this is what happened next, “ Oh he gets in the way! This is gonna go all the way to the boundary off the bat. Can you believe this?!” I don’t think anyone could believe it including Stokes who immediately apologizes but the damage is already done. In all the confusion, it later emerged that umpire Kumar Dharmasena should only have awarded 5 runs instead of 6 but this was an unprecedented scenario.

We all know what happens next. England are firmly in control with Stokes still at the crease. He drives the ball down to long off and again rushes back for two but the throw is on target at the non-striker’s end and Adil Rashid is caught well short.

Again the ball is bunted down to long on and again the batsmen sprint for two. Once again the throw is accurate to the bowler’s end and the batsman is well short. So, after 100 overs and 8 hours of play the two teams cannot be separated. The scores are tied and the game goes to cricket’s equivalent of a penalty shootout, the super over, a single over face-off. People speak in hushed tones of the 1999 world cup semi final between Australia and South Africa, which is widely considered the greatest ODI of all time but this match has surely rivaled if not surpassed it in terms of drama and intensity.

On virtue of having batted second, England would be going first in the super over. Out strode two of the most explosive members of England’s much vaunted batting lineup, Jos Buttler and that man again, Stokes. With the ball for New Zealand was another familiar protagonist, Trent Boult. The super over itself was a commendable effort from England, who scored 15 runs with the help of a boundary apiece from Buttler and Stokes , a challenging total but not completely out of reach of New Zealand.

As might have become clear to the reader by now, this is a tale of second chances and tight margins. With 16 runs needed for a New Zealand victory out strode Martin Guptill, no doubt aching to make up for that costly throw and Jimmy Neesham, who had just missed out on the 2015 squad but had seized his chance 4 years later to write his name into New Zealand sporting folklore. With the ball was Jofra Archer, the newest and quickest member of England’s bowling lineup who had only qualified to represent England a few weeks before the tournament through a rule change specifically for what was thought to be a generational talent. Now it was his chance to repay the faith shown in him, both by the board as well as the captain in entrusting the most inexperienced member of the side with the most important over of them all.

Archer seemed to be nervous, starting off with a wide and when the second ball was dispatched for six by Neesham the balance of the game seemed to be shifting New Zealand’s way but Archer fought back to bring it down to a familiar equation, “2 runs off 1 ball”. To add to the drama, the ICC regulations stipulated that if the super over was tied the side who had scored the most boundaries would win, in this case England, so New Zealand knew they had to win outright. Facing was Guptill with one final chance for redemption. Archer ran up and delivered an accurate full delivery which was played out to midwicket who fired in the throw to Buttler. To hand it over to Ian Smith once again, “He’s got it! England have won the world cup! By the barest of margins, by the barest of all margins. Absolute ecstasy for England! Agony, agony for New Zealand.”

On a day where both sides couldn’t be separated over 100 overs, no over an additional two overs was it fair that England walked away with glory but New Zealand did not, just because they scored more boundaries. Was it fair that maybe the most universally loved player in world cricket, Kane Williamson, the New Zealand skipper who had dragged his team almost single handedly to the final walked away with a runner’s up medal while England’s Irish born captain, Eoin Morgan, the leader and possibly most crucial member of the team got to lay his hands on the coveted trophy? That is a debate that could carry on until the end of time, but what ultimately mattered was that England were the winners of the 2019 cricket world cup. And that is the beauty and cruelty of sport. A matter of inches, the smallest margins can be the difference between ecstasy and agony. And if we can’t handle that I will let Jimmy Neesham’s poignant tweet after the final speak for you. “Kids, don’t take up sport. Take up baking or something. Die at 60 really fat and happy.”