The Battle of Baseball Draws to an End 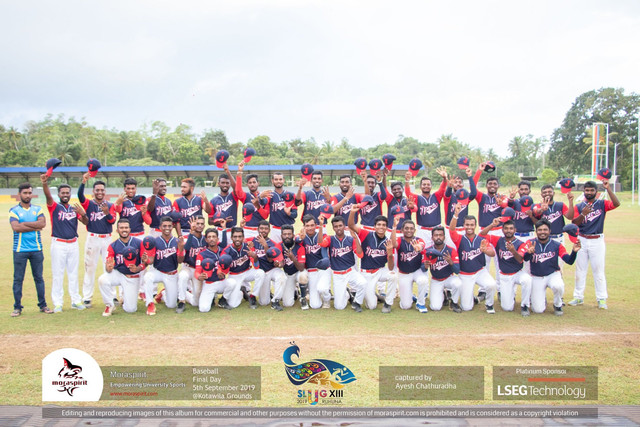 The Battle of Baseball Draws to an End

As the end of the glorious SLUG XIII is gradually nearing, many sports events have already drawn to a conclusion, marking both joyous victories and remorseful defeats in the hearts of Sri Lankan university sports enthusiasts. One of the most popular events that have recently ended is the baseball tournament, which was held for four days with the participation of eleven universities. The crown of the tournament was gracefully grabbed by University of Sri Jayawardenapura, while Sabaragamuwa University of Sri Lanka settled for the place of runners-up. University of Peradeniya won the place of second runners-up.

It is remarkable that SJP cruised through the tournament with no losses at all, winning all except the final match with a considerable lead in their scores. The team has proven its brilliance in the sport by winning the championship at SLUG XII held in 2016 as well as at IUG 2018. However, the achievement of SAB took most fans by surprise. The fact that they made their way to the finals and gave a neck-to-neck battle to the defending champions definitely deserves respect.The&nbspachievement&nbspof PER &nbsptoo is noteworthy, as SAB and PER together have managed to kick a few giants out of the charts this year.

Sharing the joy of their victory with MoraSpirit, Dilitha Padmajith Amarasiri, the captain of the baseball team of SJP stated that his team sacrificed a lot to prepare for this win, eagerly participating in practice sessions both mentally and physically. The team viewed each university participating in the tournaments as a unique challenge and carefully planned their stratergies for each match, focusing solely on winning the championship. Although not all the players in the team participated in SLUG XIII, the captain especially mentioned that all 36 members supported and energized the win of the team. Dilitha also mentioned that the team will continue their strenuous efforts to aim for the championship at IUG 2020 as well.

Baseball is not a game that can be mastered merely by physical strength it requires prodigious skills of the mind as well. Emerging as the champions of such a sport is a truly splendid achievement. Furthermore, SJP has won many hearts with their portrayal of true sportsmanship, maintaining noteworthy discipline throughout the tournament. In an era where unruly behavior is shamelessly displayed even in international sports arenas, this quality of the team should be highly appreciated.

&nbspWe at MoraSpirit extend our heartfelt congratulations to the winning teams for their glamorous achievements and our warmest wishes for all the teams to perform their very best at future events.