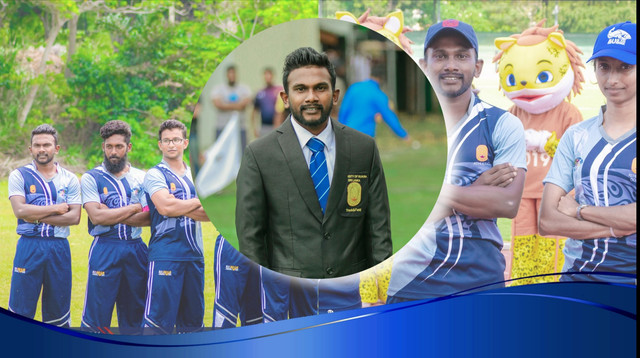 The 13th Sri Lanka University Games was the main highlight of the university sports calendar in 2019. It was also a milestone for the University of Ruhuna as this was the second time that the university got the opportunity to host the games, the first time being in 1998. Organizing an event of such a scale takes the joint effort of many who are willing to do anything to make the event a success. At the helm of the organizing team was none other than Migara Maduranga, who not only was the Sports Council President, but also an active member of the SLUG organizing committee. All these responsibilities didn’t stop him from balancing the three sports that he was excelling at. We got the opportunity to spend some time with Migara and ask him a few questions about the unique experiences he had while making sure last year’s Sri Lanka University Games became a reality.

How did you feel when you were first appointed as the President of the University Sports Council?

To be honest, it was an amazing feeling to know that I had been appointed to such a position. The best part was that I was appointed in the year that we got to host SLUG after 21 long years. I am deeply humbled for getting that opportunity. On the day that I was appointed, I felt a great responsibility on my shoulders as I was in charge of 23 sports in the university and I knew that we had a major event ahead of us that we needed to organize. In 2018, I served as the sports editor under the leadership of Janith Ranathunga and Chathura Madushan. During that time period, I got to see how our senior brothers shouldered their responsibilities and they inspired me to be who I am today. I would also like to mention my secretary Nadeema Thathsarani and my Vice President Manoj Kumara, both of whom were like my left and right hands during this experience.

You should have had to put in a lot of work to organize an event of such magnitude.

From the time our university was given the rights to host the games, our Vice Chancellor and Deputy Vice Chancellor, together with the sports advisory board and the Physical Education Unit, formed various committees to look into the most important matters. I am thankful for our lecturers and our support staff who were very involved in monitoring their designated sports throughout the games. From our side, we had to build up a team of volunteers from scratch. We got the support from our fellow brothers and sisters from all our faculties for this. The volunteers played very important roles, especially during the opening and closing ceremonies. We appointed leaders to co-ordinate the volunteers who were grouped into specific teams. It was not just my effort, but definitely that of a multitude of people who were involved in making this a success.

What were the challenges that you faced during the course of the Games?

We had to face quite a few challenges even before the Games had even started. The universities were closed for several weeks during the Easter Sunday Attacks. In addition, various internal problems between students and the administration resulted in the university being closed for some time. This was a hindrance to the plans we had systematically laid out. It was a challenge was to communicate with the hundreds of volunteers that we had on board during the games. Coordinating with so many was definitely not easy. But I think that the biggest challenge we had was the unpredictable weather. It started raining on the day of the opening ceremony, which forced us to move the ceremony from our university grounds to the Rabindranath Tagore Hall where we had to quickly adapt and manage the situation in a very short time.

What do you think of the overall performance of UOR at the Games?

I was actually very impressed about our performance. We were able to reach the Quarter-Finals in 19 sports. This was also the first time that we passed 200 points in the overall table. Our swimmers went on to win the Men’s Championship, and our Elle and Carrom teams made it to the podium in the overall tally. Athletics too was quite a success. I would also like to mention our Rugby Team that made it to the Quarter-Finals after just six months of training and our Hockey Team that qualified for the semi-finals after so many years. All of these were the results of a lot of sacrifice and hard work.

In addition, three athletes and three swimmers from our university were selected to represent Sri Lanka at last year’s World University Games. We have a South Asian Taekwondo medalist and a World University level Cross-Country athlete with us.

Is there anything you think the university could improve in order to perform better next time?

I think we need to build our unity as a team and work together from the very beginning. If a team made it to a certain stage the last time, (Let’s say Quarter-Finals), I think the team must always try to improve that performance next time. Each sports team must make it a point to aim to at least make it to the knockout stage. I think everyone in our university must engage in a sport. Then it will be easier to develop the best set of sportsmen. At the end of the day it all depends on our commitment and our determination.

How did you balance all your work and responsibilities with your own training schedule?

Well, I am currently representing the university in three sports: Cricket, Athletics and Rugby. I used to go for training in the morning, attend lectures, and then again go for training in the evenings on a daily basis. I also had to attend a lot of meetings with the Organizing Committee and the Staff which left me with very little free time to be honest, but whenever I could I spoke with most of the sports captains and sorted out their problems regarding many matters. My main priority was definitely my academics. I got a lot of support from my Dean, my lecturers and my friends who constantly supported me. It was definitely no easy task, but with the support of many, I was able to do my best.

What advice do you have for young students who aspire to become sports leaders in the future?

To someone who would like to be a captain or vice-captain I would say that he or she must be able to take on a responsibility when given one. To become a leader, you must first be able to work together with everyone and build strong relationships with your teammates. A leader must respect everyone’s ideas and should be able to respect higher authorities in the university including the administration and even the support staff. A captain must also motivate his or her teammates in victory and loss. To be appointed as a leader in sports out of 8000 students requires the respect and approval of a vast majority and that honor should not be taken for granted.

It was a unique experience getting to know so much about the SLUG experience through the eyes of a leader who was behind it all. We at MoraSpirit would like to wish Migara the very best for his future endeavors and we are grateful for the legacy that has been set by him as an astounding leader for the next generation.