University of Moratuwa Triumphs in Taekwondo 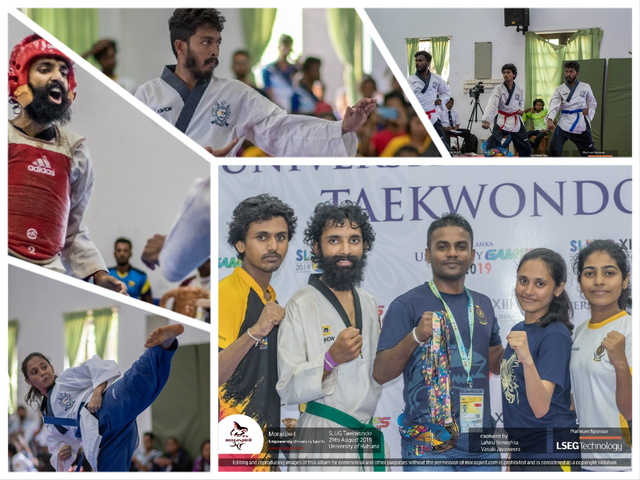 University of Moratuwa Triumphs in Taekwondo

The Taekwondo event of SLUG XIII drew to a close on 29th August 2019, glorifying University of Moratuwa as the champions in both male and female categories. The event was a three day long display of talents filled with mastery and finesse.

The similarity of the Taekwondo rankings of SLUG XIII to that of IUG 2018 is quite remarkable. The rankings of the female category remain the same while the ranks of the male category are interchanged among the same three universities. UoM won the championship in both categories at both events. The ranking charts at SLUG XII held in 2016 contained the same names as well. However, Uva Wellassa University of Sri Lanka, which won the place of second runners-up in the female category at SLUG XII, was not able to make it to the charts this time.

Expressing his opinion on their victory, W.R.M.D. Wimaladasa, captain of the Taekwondo Men’s team of University of Moratuwa, stated that following their defeat at SLUG XII, the team focused their practices in the last three years on winning the championship at SLUG XIII. He believes that the dedication and the team spirit of each and every team member, irrespective of whether they performed at SLUG or not, lead them towards this victory. The team has worked hard for this victory despite the challenges they faced, including the lack of time for practices due to the newly implemented rule of closing the university at 10pm. The captain also mentioned that his team will do its best to retain this championship in coming years as well.

R.A.D.N. Rajapaksha, captain of the Taekwondo women’s team of University of Moratuwa, shared her joy with MoraSpirit as well. She stated that her team was strong, dedicated, and determined to win back the crown they lost in 2016. The female team consisted of an astonishing number of 21 members this season, which was the highest member count in the recent past of the team. In her opinion, regular attendance of this large team despite the high academic pressure was as important an achievement as the championship itself. Upon being questioned on their future plans, she mentioned that the talents of her team members reach far beyond the university arena and that she expects them to perform well at national level competitions in the forthcoming years.

We at MoraSpirit extend our heartfelt congratulations to all the winners, and best wishes for all the players to pursue their dreams at coming events. Stay tuned with MoraSpirit to receive more updates on SLUG XIII.