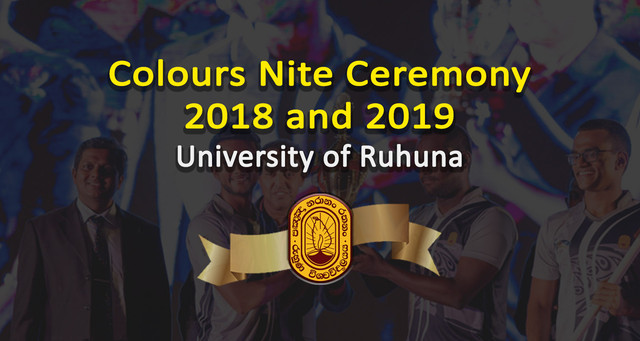 The Colours Nite started off with speeches by the Acting Director of the Physical Education Unit Mr. Keerthi Kumara, the Chairman of the Sports Advisory Board, Dr. Nilantha Liyanage, the Chief Guest Snr. Prof. Sujeewa Amarasena, and finally the Guest of Honour Col. (Dr.) Saveen Semage. The night was filled with numerous entertainment items, courtesy of the Faculty of Medicine Dancing and Music Teams together with performances from the Management and Finance and Science Faculties.

As a result of the performances in the years 2018 and 2019, 185 students received colors including those who received colors in multiple sports. In addition, the best performers from each sport in both years were felicitated in grand style. The final set of awards were set aside for a special group of students whose performances were noteworthy. The following list of sports personalities who were eligible for the ‘Special Award’ included those who had represented the country at international events and had performed exceptionally well in national events.

In all glitz and glamour, the event’s final lineup concluded with the two biggest awards being awarded to two of the university’s shining stars who stole the night away. First, it was Piyumi Ahinsa Jayamini from the Faculty of Engineering who won the award for the highest number of color awards for her outstanding performances in Track and Field, Elle, and Volleyball. Finally, it was time to award the ‘Best Performer’ award, and it went to none other than Sithumini Wijewickrama from the Faculty of Agriculture for her Silver-Medal-winning performance in Taekwondo at the 13th South Asian Games and her performance at the World University Karate Championships where she made it into the list of top 8 players.

The event concluded with a speech from the President of the Sports Council, Mr.M.L.C.Chinthaka, and finally, a firework display at the University Grounds. We at MoraSpirit would like to congratulate all these athletes from the University of Ruhuna who were awarded colors and wish them all the best of luck in their future endeavors.

During a time many universities were forced to postpone their Colors Awarding Ceremonies, the University of Ruhuna has taken the first step to revive university sports. An initiative, we hope, will be followed by many others in the months to come.