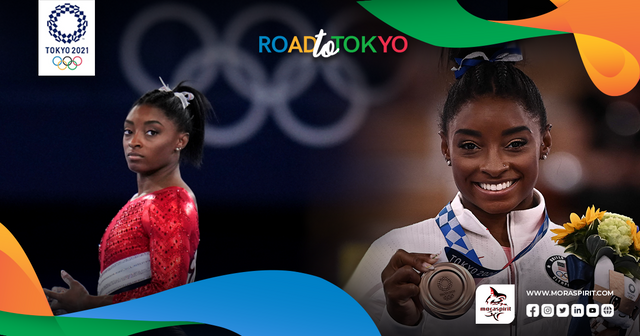 She is the gymnastics GOAT! 25 World Artistic Gymnastic Championship medals and 7 Olympic medals so far in her career, out of which 23 are gold.  She is an inspiration to all who dream of becoming a successful gymnastic player; an influential character for all young female athletes. She has already revolutionized the world of gymnastics, with four gymnastic skills named after her.

24-year-old Simone Arianne Biles is the most decorated gymnast of all time. This American gymnast became the talk of the town during the Olympic games, Tokyo 2020. And that is because she QUIT! She decided to withdraw herself from the team final and the women’s individual all-round at the Tokyo Games. Her exact words from what she wrote on Twitter was “I can’t even fathom twisting. I seriously cannot comprehend how to twist… I don’t think you realize how dangerous this is on competition surface,” she continued. “Nor do I have to explain why I put my mental health first. Physical heath is mental health”. As soon as the term “mental health” came into context, people around the world started to voice up and pen their opinions to say how weak she is to quit a sport. While there were people who spoke in her favor, the negative voices rang loud and overwhelming throughout the world. Charlie Kirk on her radio show/podcast said “she is also very selfish, she is immature and she is a shame to the country. She is totally a sociopath. We are raising a generation of weak people like Simone Biles”.

These athletes are trained in high intensity. To become professional athletes, they train day and night and are expected to go through pain, blood, and sweat. This is why many think when an athlete quit because of stress or mental health, that they are weak, selfish, and arrogant. But as mentioned above Simon is the most decorated gymnast ever in history with so many records and medals under her name. Thus, it is clear that she has already climbed the ladder of success, she has worked hard for it, and she definitely isn’t “weak”. Then why did people call her weak when she quit? The main reason for this is the lack of awareness about mental health. An athlete quitting due to a physical injury would not be called weak; the injury is visible to the public. But the question comes, what about the scars that are unseen? The injuries that are invisible, the battles fought under closed curtains. It is high time for us to consider mental health as a serious health issue.

A majority of athletes don’t come out and speak loud about what they go through since they know that they would receive overwhelmingly negative comments on their quitting as Biles did. When we are physically sick, we go to a doctor for treatments and nobody questions our decision on that. The same should be done when we are in a mentally unstable position. No one should question the decision a person makes, prioritizing mental health over something the others want or expect, and at times, even over things that the said person is passionate about. Athletes should not only be celebrated when they win medals at competitions but also when they lose. When they have given their 100% and still lose the game, people don’t appreciate their effort. It is easy for you and me to criticize them behind the screen, with our pens, microphones, and our keyboards. But it takes so much effort for an athlete to go out into the field and perform, representing millions of people who are counting on them.

The decision Biles took to prioritize her mental health over gymnastics is certainly an eye-opener, not only for athletes but also for the entire mankind. We all need to think twice before commenting on an individual’s decision and to respect the decisions they make pertaining to mental health. last but not least, we should normalize athletes quitting sports because of their mental health. If they have the right to quit a sport due to physical health issues; they have the same exact right to quit due to mental health issues. Because at the end of the day, all your cups and medals made out of vogue metal cannot breathe, but you can. It is important that you try to do your best at whatever interests you, but you should always understand your priorities and choose to be who you personally want to be instead of what the rest of the world expects you to be.