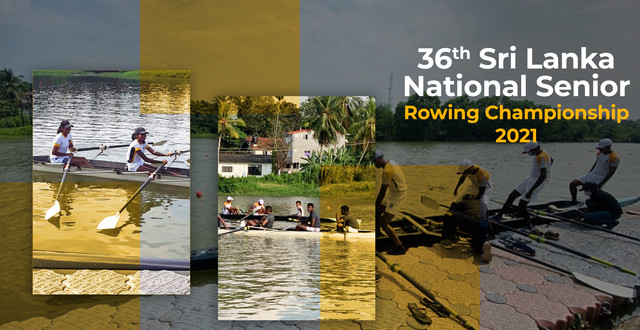 The University Sports calendars of University of Colombo and University of Moratuwa kick started the year 2021 grabbing several medals at the SLT –Mobitel 36th Nationals Rowing Championship which was held at the Diyawanna Rowing Centre on 12th and 13th of March.

Even though the pandemic had an adverse impact on the entire university sports community, these athletes were able to excel in their respective categories, which is truly commendable. The event was declared open by Mr. Rohan Fernando, the Past President of the Amateur Rowing Association of Sri Lanka and the Chairman of Sri Lanka Telecom. The preliminary rounds and the Heats were held on 12th of March. The most competitive races the two universities had to row took place on the 13th of March.

The Men’s Intermediate coxed four finals grabbed everyone’s attention as it was a very tough completion which also included both universities in the same race and University of Colombo won the bronze medal after a thrilling finish. The boat comprised of Shehan Shamalka, Dushyantha Hettiararchchi, Shehan Liyanage , Samitha Wijethilake and coxed by Avishka Jayaweera completing with a time of 7:30:11. University of Moratuwa emerged 4th place with Anupa Satharasinghe, Kavindu Indikadulle, Heshan Abeysekara, Shaheem Halaldeen and H.A.A.S. Mallawaarachchi.

The women’s teams of both universities were able grab medals in their respective categories. Ranmalee Nanayakkara and Nadani Mendis from Univeristy of Colombo won the Silver medal in the Open Double scull category with a timing of 9:14:18. The bronze Medal in the open Pair was won by Nadani Mendis and Upuli Edirisingha of University of Colombo with a timimg of 8:30:49. Ranmalee Nanayakkara won the bronze medal in the Open Scull category. Thus Univeristy of Colombo excelled in the waters of the Diyawannawa in the opening category of the Senior Rowing Championship

In the women’s Intermediate category J.M.Ashni Dilina and Mindi Karunaratna of University of Moratuwa won the bronze medal in the double scull event with a timing of 9:12:00. Himasha Panditharatne and Vibhanga Amarasingha of University of Colombo won the bronze medal in the Intermediate pair event with a timing of 9:29:25. The Senior and Intermediate Rowing Nationals 2021 was held under strict health regulations and guidelines issued by the officials, with the participation of over 150 athletes representing eight institutions.

All the achievements these university athletes gained would definitely motivate and set an example for more and more undergraduates to engage in this beautiful sport. We at Moraspirit congratulate both the Universities to bring glory to their respective universities in future regattas.