Will Japura be Able to Bring the Trophy Home for Another Consecutive Year? 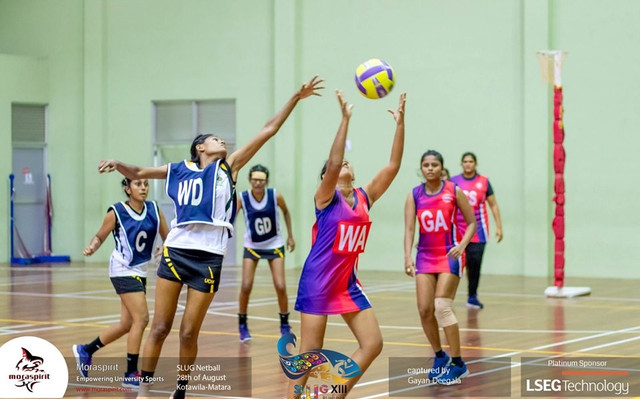 Will Japura be Able to Bring the Trophy Home for Another Consecutive Year?

SLUG XII 2019 Netball tournament began at Kotawila Grounds, Matara on 27th. Each team played under four separate groups and the 8 teams who performed at their extraordinary best reached the quarter finals which was held yesterday.

The second day of the tournament began with the match between the University of Jaffna and University of Sabaragamuwa. The match ended opening the doors of the Semi Finals to Jaffna who beat its opponent with a score of 32-21.

The second match featured the University of Moratuwa against the University of Kelaniya. Owing to the significant efforts of the Goal Shooter, Thisuri Laknadi and the rest of the Moratuwa netball team, they were able to walk through the doors of the semifinals with a tight score of 32-29.

Thereafter, the third quarter final match was held between the University of Colombo and the Wayamba University. The unbeatable conquerors, Colombo showed their hunger to win the trophy this time through their magnificent performance. They were able to beat Wayamba with a score of 39-05.

The final match of the quarter finals was between the University of Japura and the University of Peradeniya. Even though Pera tried to launch a good attack during the match, at the end of the day, Japura was too good a team for them to handle as the final score line showed a score of 40-22. Japura emerged as the final semifinalist in a day that marked down the elegance of netball at university level.

The day concluded opening the doors of the semifinals to four teams where each of them will continue their fight for the high price today. The two matches—Colombo vs Moratuwa and Japura vs Jaffna—will decide who goes through to the final which will be held later today.

Stay tuned with MoraSpririt to know who will bring the netball championship home this year.