Women in Sports: Omaya Udyangani, the Blazing Runner of Sabaragamuwa 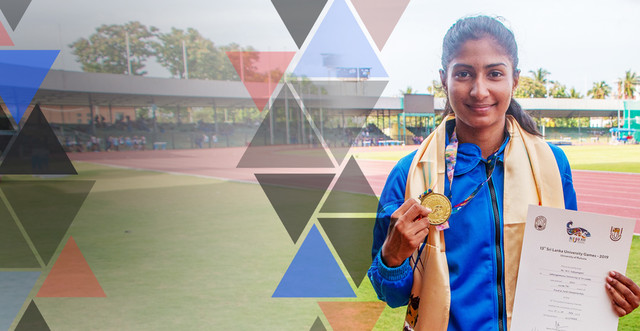 Women in Sports: Omaya Udyangani, the Blazing Runner of Sabaragamuwa

If one were to pick the best athletes ever to grace university sports in Sri Lanka, Omaya Udyangani would be the character that arrives in a red convertible, gets off the car with enough swagger to give any South Indian actor a run for their money, puts on her sunglasses to wave gracefully to the onlookers, and makes an entrance to upstage the rest. Because when it comes to justification, her achievements speak for herself.

When I am asked about the day my story began, the obvious answer is that it was in 2010 at Sugathadasa Stadium. In 2010 I was qualified for All Island School Games 100m event representing my school, Sinhapura Sinhala Vidyalaya, Ampara.

When I turn back to my past, I realize small benchmarks we set for ourselves will always guide us to bigger and better endings. That day back in 2010, I overheard my father telling someone that he wanted to watch his daughter running on the same tracks one more time. It was just one more time. Yes, I overheard him saying that but he never asked me, personally, to do it for him.&nbspBut it was his words that day which led me to where I am today.

Being a 13 years old small girl, I promised myself that day to turn his words into a reality in the following year.&nbspHaving no coach to teach me the techniques, having no ground to practice, I never had doubts about my strengths and capabilities, as I believed that limits can be crossed when we believe in what we want. Still, it was almost unbelievable when I became the best athlete of Eastern Province in 2011. When I won an all-island medal for the first time I dreamt of new heights to reach, because I wanted it so badly not only for my father but for myself. I found myself loving the sport.

From that moment to now, the journey I came so far was not that easy. I was not given chances on a silver platter. Thinking back it was all about hard work with a very little amount of luck. In the real sense of words, my experiences taught me that our commitment and dedication decide what we deserve.

I would be lying if I didn’t say that there had been countless moments where I had gone through frustrations. Sometimes I even thought of giving up. When I started schooling at Walimada Central College in 2012, I had to stay in the school hostel, away from home. Even for the New Year break, I was allowed to go home only for a week, I had holidays neither in August nor in December. I missed my family a lot. There were hundreds of lonely nights.

Having encouraging parents and four awesome siblings, I have always received enough and more support to face those hard times. They motivated me to do more and more by staying strong. Whatever the meet I participate, my father always wants a gold medal and best timing from me. In case my timing is not that good, it is compulsory to give him excuses. My family did, and they still do all that they can do for my success. To be honest it is indeed a blessing to have them.

There were dozens of challenges that I had to face throughout this time. I fought against them with hard work and sweat. There was no magic to overcome them. Once we start our journey it is obvious to have obstacles. But what matters all the time is how bad you need your dream to become a reality.

Doing a sport is something more than just running on a track, having tans on your skin, or winning a medal. It is something that you have to feel. No piece of writing would do any justice to that feeling whatsoever. That feeling is worth everything.

If you are reluctant to join sports, if you think that you are not capable of winning gold medals, I must say doing a sport is beyond a medal. Even you are a newcomer to the sport, winning a medal is still possible. You have to believe in yourself and work for it. It may take time, but trust me, if there is a will, there is a way all the time. I always want myself to be a winner, I always believe that I have to be a winner at the end of my journey. If I have not won, then it is never going to be the ending. That is my belief, in other words, my motto.