Born with a Silver Paddle 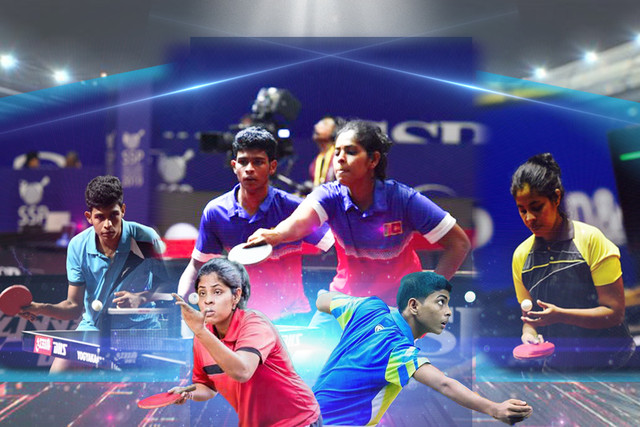 Born with a Silver Paddle

They say people who are lucky enough to be born to a wealthy family are born with a silver spoon. Though in real life, nothing can be taken for granted. There is dedication, hard work, blood and sweat behind every single victory. Once the Mozart of table tennis, Jan-Ove Waldner said “Hard work got a whole new meaning to me. I understood what it actually would take of me to become the best player in the world.” Today, I am going to tell a story about three siblings who had fallen in love with table tennis. These three did not wait for luck to find them instead, they started creating their own destiny through hard work and dedication.

“It all started with the inspiration I got from my father, uncle, and grandfather,” said Erandi, who is the eldest of the three siblings. She was the best female paddler in the country as of February 2018 with the world ranking of 283. Currently, she is ranked number 5 (382). After finishing A/Levels in Ambalangoda Dharmasoka college, Erandi entered the University of Sri Jayewardenepura to follow Sports Science and Management degree. Now she is in 4th year, having almost completed the degree successfully.

“Being selected to the university was the happiest thing happened in my life, I was a bit shy kid when I was little and different than others at my age, but I was inspired by my family and started playing table tennis at the age of six. My parents encouraged me a lot. I am very lucky that I could find my passion at such a young age. Even though I started table tennis early, I could not win a single certificate until 6th grade. I got disheartened, but I never stopped trying,” she said recalling the early days of her career in the table tennis.

With a smile on the face, Erandi started talking about how sport has changed her personality, “I had quite a temper and I easily got heartbroken; they were my weaknesses, but when I started playing table tennis, I got stronger day by day. Continuous practice and facing new challenges in table tennis made me stronger. This game not only improved my physique it also improved my personality”. Who would think that the little girl who had struggled to blend with others of her age, who was disheartened because she did not have a single certificate despite all the hard work will come this far. Today, Erandi Warusawithana is one of the finest table tennis medalists that our country has. Erandi and her team won the silver medal at the 13th South Asian games in 2019, and she won a bronze medal for women’s singles.

“It was not always an easy journey, and there were many hardships. In the field, there is always jealousy and discouragement from the opposite teams. But gradually you get stronger with all the challenges and hardships. I was the leader of the women’s team in the World Table Tennis Championships in 2015 and I was the youngest in the team. Though I was an experienced table tennis player back then, my team members had more experience than me. There were many difficulties because everyone had different opinions on giving leadership to a junior. But considering my performance and my achievements, I got the privilege to be the leader.”

“It is very discouraging that we do not have sponsorships like other games. We do not have a proper association, a proper gym that is dedicated to table tennis. We could do much more if we have more facilities. Last year, when we had South Asian Games in Nepal, we only had three months to practice as a team. Though we practiced every day, it is important to have a proper practice for a longer period when we are getting ready for an international level competition. Still, we won the silver in the team’s play and I won the bronze in women’s single. In the team’s play, we lost the gold medal to India. We have been losing to India for years now. I feel if we had proper practice and necessary facilities, we could have done much better there.” I heard the pain in her voice. Imagine you put your heart out to something, but you are constantly drawn back by the things that are not in your control. How frustrating that could be.

“We practice so hard. When a tournament comes, we practice eight hours a day. Once I had tennis elbow injury due to practicing too hard. I don’t mind injuries if I could win a victory for my country. But if we properly start practices earlier with enough time, we will have a better performance. It is not a last-minute game, it is years of practice, months of hard work. I do not want our efforts to go in vain,” she said. It is the responsibility of the Ministry of Sport and other relevant authorities to pay attention to this matter. The talent and years of hard work of these players should not be wasted.

“My biggest target is to bring a gold medal to my country in the next Asian Table Tennis Championship,” added Erandi. And let me put my two cents and tell you, she will bring many gold medals to Sri Lanka. Not alone, Erandi has two knights who play by her side. They are Supuna Warusawithana and Hiruna Warusawithna, her two little brothers. “I am so proud that my brothers are also playing table tennis. Both are in national rankings. We practice together sometimes. They both have a bright future in this field,” she said. Indeed, Supuna Poornima Warusawithana, a proud Dharmasokian as well as an excellent Anandian, is a 2nd year undergraduate of the faculty of Information technology at the University of Moratuwa. He is currently the 2nd best player in the country. As an immediate senior of Supuna, I am very proud to have such a talented athlete in our faculty.

Following in his sister’s footsteps, Supuna also joined table tennis at the age of 6. After finishing his A/Levels, he has joined the IT faculty of University of Moratuwa. “Since childhood, I always wanted to do a job in front of a computer, I am very lucky that I could enter to the IT faculty to achieve my dream and I am proud that I was able to balance my studies and my sports career well. I did not miss a single thing because of choosing table tennis. Instead, I gained a lot because of table tennis. Even to this day, I believe that table tennis made me unique and it made me feel special. Just like my sister I am also a short-tempered person, but table tennis has improved my personality a lot,” He said cheerfully.

Okay, a short-tempered brother-sister duo, sounds interesting! “So, how do you feel about being Erandi’s brother, was there any influence from her to join the table tennis,” I asked Supuna and he fondly recalled Erandi’s impact on his tennis career. “I especially wanted to talk about her. She indeed influenced me to join table tennis. But what is interesting is after she started playing table tennis, for the first five-six years she did not achieve anything. But she did not stop trying, she worked so hard and then one after another she started to win the matches. There were many times that people got to know me as Erandi’s brother. Even when I joined the university, I was introduced as Erandi’s brother. I am not ashamed to say that, instead I am very proud of having her as my sister,” He said.

For a person who has played for numerous international tournaments, Supuna is a very humble and down to earth person. “Even before I joined the university, I got to know the table tennis players at the university. During the time I did my A/Levels in Ananda college, the university team often invited me to practice with them, they are very friendly. To this day they never treated me differently because I am a junior. We have a great bonding, more like a family.” Indeed, table tennis captain of the university, Mewan Abeywickrama speaks highly of Supuna.

From the start of the interview, I was curious to know if this brother-sister duo has any specific role model. So, I threw the question at them. “Not particularly” answered Supuna, “I have learned a lot from observing many sportspersons especially the players from China, but I do not necessarily follow one person”. Erandi agreed with her brother. “Say it’s me”, Supuna cheekily prompted his sister as we all cracked up.

Becoming the national champion, a feat his sister has already achieved, is what Supuna looks forward to right now. “My target is to be the national champion in table tennis, I was so close to my target last year, but I ended up as the runner up. I will try my best next time. I want to balance my sports and studies as I want to be successful in the IT field. It is my dream from my childhood, but I will not give up on table tennis either.”

Having lived and breathed tennis for this long, Supuna knows where the loopholes are in local tennis and what needs to be changed. “When we go to an international level competition, the team is selected at the last moment. We get to know the team players in the last two-three weeks. In the past, we could give a head-to-head match to India. Even though we are a small country compared to India, we were strong. In 2015, Uday Imesh Ranasinghe denied India a clean sweep and brought the gold medal to Sri Lanka in the South Asian Junior Table Tennis Championships. That was Sri Lanka's first-ever gold in championships. The Indian player that he beat was among the top 10 in the world ranking. We were that good. The difference is that India gives every sport equal importance and attention, unlike here. In our country, table tennis has not been given the same importance as cricket. At least before an international tournament, if we could get an international coach and a proper training program, our players will do miracles because they are that good”.

Erandi and Supuna are not the only Warusawithanians taking local tennis by a storm. They have a little brother, who is already on course to follow in his brother and sister’s footsteps. “My little brother Hiruna Warusawithana is also doing a great job. Even playing with him gives me good practice. We three used to play together. I am so proud of my brother as he already ranked 2nd in the under 18 national championship,” Supuna cued us about what to expect from his brother in the future. Hiruna, the youngest in the family, led the Cadet team in the Asian Junior and Cadet Table Tennis Championship in 2018 which was held in the Maldives. He is also a proud Dharmasokian.

If you came this far, now you know the legacy of Warusawithanians. Mark my words folks, one day this brothers-sister trio will shine the name of this little island. Warusawithana legacy has already begun and I am lucky enough to be a part of unveiling it to the world. Famous tennis player Billie Jean King once said, “Champions keep playing until they get it right.” Just like that, nothing will stop this trio from reaching their goals. Sooner or later, another Moraspiriter will be writing about that victory, in the middle of a night with sleepy eyes and a proud Sri Lankan heart, just like I do now.