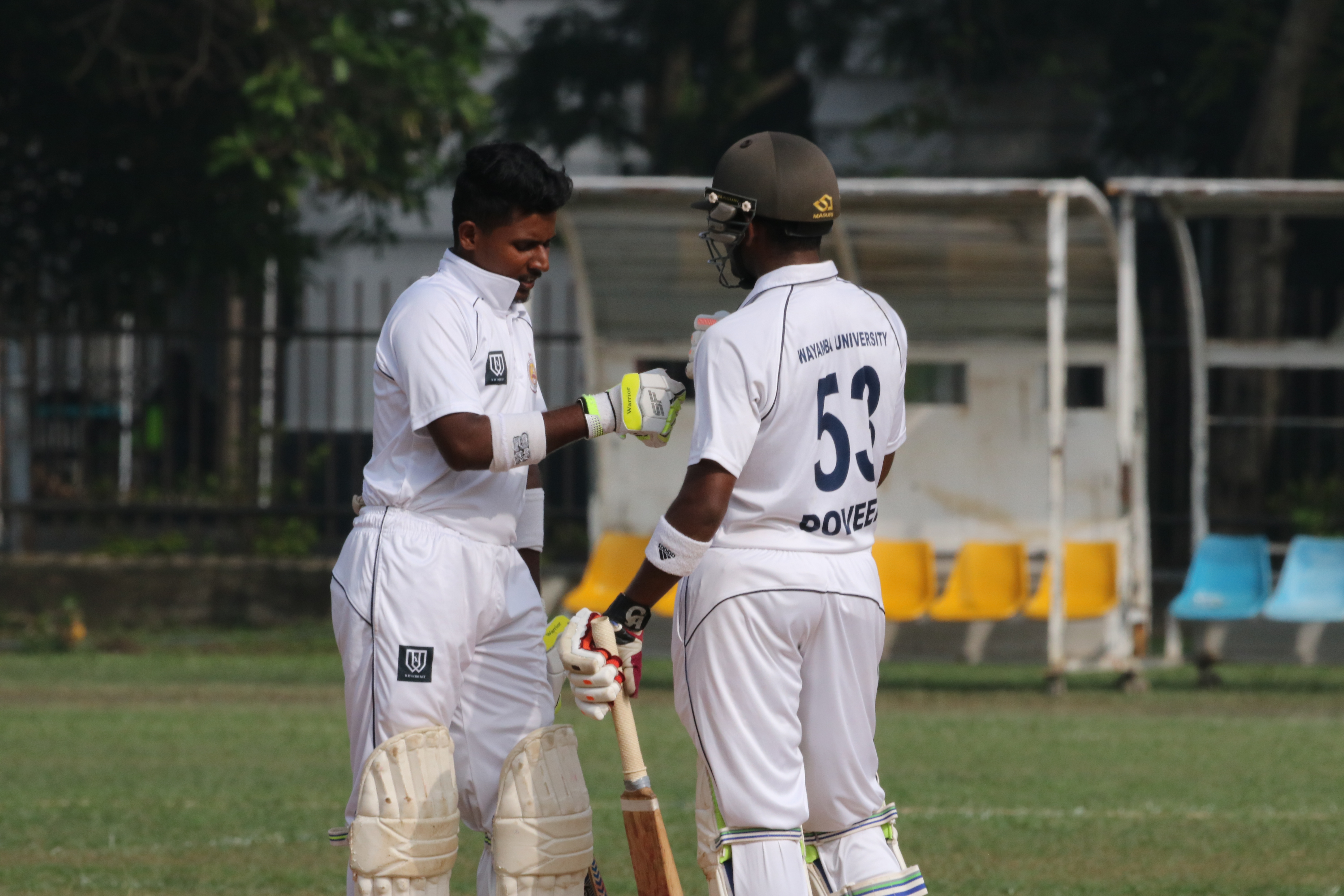 It was the Universities of Moratuwa and Sri Jayawardenapura who overcame their respective opponents in the Inter University cricket semifinals to set up a blockbuster final clash. Both semifinals were played in spite of interruptions from the weather with the first semifinal actually being played on the reserve day.

The first semifinal between the University of Sri Jayawardenapura and the University of Jaffna saw arguably the pre tournament favourites going up against the dark horses. However, the reduction of the match to a 25 over shootout would on paper appear to suit the hard hitting Japura batsmen and it would prove to be so with a dominant batting and bowling performance outclassing their opposition. Batting first Jaffna got off to a solid if slow start at 36-1 at the end of 9 overs for the loss of captain Prashanth Krushnamoorthy but it was all downhill from there as they would loss 4 wickets in the next 9 deliveries for the addition of no runs with 2 wickets falling to Supun Waragoda and another two batsmen being the victim of run outs. From then onwards there was no coming back as Jaffna would go on to lose regular wickets, ultimately getting bowled out for just 80 with Deshan Fernando and Asel Sigera picking 3 wickets apiece.

In response Japura were never in any trouble in their chase, even though they did not score at the barnstorming rate they had done in previous matches. The Japura batsmen were content to not take too many risks and chase down the total comfortably and they would manage to do just that reaching their target with 6 wickets and 47 balls to spare.

In the other semifinal, it was the University of Moratuwa who made their way into the finals with a calm and composed win over the Wayamba University of Sri Lanka in their semifinal clash.

In a match reduced to 25 overs, Wayamba got off to a quick start courtesy of Dimuthu Fonseka who scored a breezy 33. However, Nalintha Wijeweera would stifle that momentum in the middle overs with a 3 wicket haul which would reduce Wayamba to 53-4 after 11 overs before Vinuja Ranasinghe applied the breaks even further with a stifling spell where he conceded just 12 runs in 5 overs while capturing 3 wickets. At one point it seemed as if Wayamba would finish with less than triple figures but some lusty blows at the end by Kavindu Sathkumara lifted them to a total of 106, including 2 sixes off the final 2 deliveries of the innings.

In response, there were some jitters in the Mora camp as they lost a wicket early on to a run out and were behind the run rate after 9 overs at just 28 runs. However, a partnership between the captain Rahal Fernando, and vice captain Wimalsha Janakpriya calmed the Mora nerves. Both batsmen would start cautiously and then go through their full repertoire of shots as the Wayamba bowlers found it increasingly hard to curb the scoring rate. The University of Moratutwa would go onto reach the target with 11 balls to spare with Rahal Fernando ending with a captains knock of 61 with a flicked four off his legs sealing the win.

This all sets up the big showdown between Japura and Mora which will take place on the 18th of December at the University of Colombo Grounds with the Wayamba University of Sri Lanka and University of Jaffna set to fight it out for 3rd place on the 17th in what promises to be two mouthwatering clashes to finally bring an end to an epic inter university cricket campaign.