State University Alumni at the Olympics 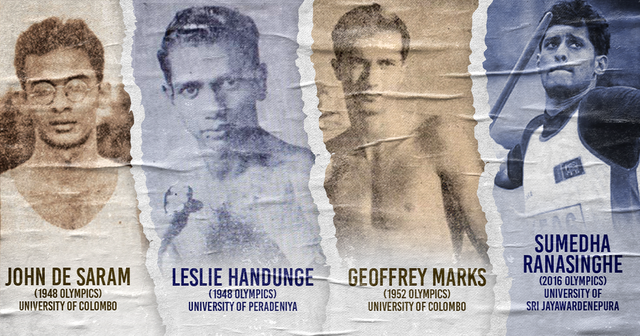 State University Alumni at the Olympics

The Olympics, the pinnacle of sporting accomplishment has been held continuously throughout the years (with the exception of the years of the World Wars) since 1896. To earn your place at the Olympics, sportsmen and women have to show exemplary dedication and single minded focus towards their goal. An easy assumption to make would be that academics would be a barrier towards such a goal and that university students would find it quite a large hurdle to leap over.

However, even though there is a certain degree of truth to it, there have been many exceptions to this statement, both in a contemporary and historical context. One notable example that springs to mind is that of Gabby Thomas, one of the favourites for the women’s 200m at the Tokyo Olympics and the second fastest woman over the distance in history, a Harvard graduate who is currently pursuing a Master’s in epidemiology at the University of Texas.

Sri Lanka has been a constant presence at the Summer Olympics since their first appearance in 1948 (with the exception of the 1976 games), with 93 participants across 11 disciplines. It was a pleasant surprise to discover that a considerable number of these Olympians have received University Education, mainly through scholarships to foreign universities. However, there was also a smaller number of graduates from local state universities, as well as a rather distinguished personality associated with a local university who have represented Sri Lanka at the very highest level and it’s these select few Olympians who are the subject of this article.

Definitely one of the most interesting personalities to have ever represented Sri Lanka at the Olympics, John De Saram was the youngest Sri Lankan representative at the 1948 London Olympics at the tender age of 20 years. An extremely successful school athlete at Royal College, Colombo, he was actually not a university undergraduate at the time of his Olympic participation as it was his exceptional performances for Police Sports Club that booked his ticket for the Olympic games in the 200m and 400m. At the Olympics De Saram progressed to the second round in the 200m, but was unfortunately eliminated in the first round of the 400m.

Post Olympics, Mr. De Saram received a Bachelor of Laws from the University of Colombo, a time in which he continued to represent Sri Lanka, notably at the 1950 Empire Games (the precursor of the Commonwealth Games) and after his graduation he would pursue his higher studies at the prestigious Yale University in the United States. Mr. De Saram would join the United Nations Office of Legal Affairs in 1958 and would have an illustrious career in the organization, serving a number of different roles, most prominent of them being the official Sri Lanka representative for the United Nations between 1998 and 2002.

Widely noted as the first Sri Lankan boxer to ever win an Olympic boxing bout, and one of the rare few Sri Lankan Olympians to represent Sri Lanka at multiple Olympic Games, Leslie Handunge would represent the country at both the 1948 and 1952 Olympic Games. In 1948 he would beat his first round opponent Portario of Uruguay before suffering a controversial loss against his Italian opponent in the second round. In the 1952 games, representing Sri Lanka as the team captain he would again go on to to progress to the second round.

Following his swimming career and university life, Mr. Marks would go on to earn both his MSc and PhD in Crop Diseases from the University of Wisconsin and would later serve as the Forest Pathologist with the Forests Commission of Victoria in solution.

The current Sri Lankan record holder in the Javelin throw and one of the few Sri Lankans to achieve the direct Olympic qualifying standard with his record breaking throw of 83.04m, Ranasinghe would represent Sri Lanka at the 2016 Rio Olympics while still an undergraduate in Sports Management in the University of Sri Jayawardenapura. He is also a South Asian Games medalist in the event at the 2016 event.

Mr. Ranasinghe continues to be the No.1 javelin thrower in Sri Lanka and was rather unfortunate to miss out on qualification for a second successive Olympics. Despite, being placed at 30th in the World Rankings at the beginning of the qualification period he would fall to 45th and missing out on qualification to the Olympics due to a lack of consistent opportunities to participate in global events.

Despite, not achieving his undergraduate degree at a local university, it would be remiss of me not to mention Dr. Ray Wijewardane, the famous Sri Lankan entrepreneur who is widely credited with the design of the world’s first hand held two wheel tractor, revolutionizing the field of agriculture. He would go on to serve as the Chancellor of the University of Moratuwa and earn the highest civilian honours of Sri Lanka, Vidyajothi and Deshamanya.

What might be lesser known was that Dr. Wijewardane was an Olympian in sailing at the 1968 Mexico City Olympics and would also win a silver medal in the discipline at the Asian Games. A true all- round personality!

As it has been made clear through the article, academics might not necessarily be an insurmountable barrier towards your Olympic aspirations and I am sure that this list will grow in the years to come.